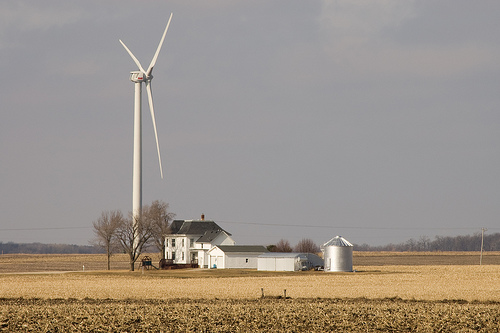 A wind turbine near a home in rural Lee County, Illinois.

Editor’s note: An earlier version of this story incorrectly stated the law would take effect Jan. 1. The law won’t go into effect until at least March 1.

This year, a new Wisconsin state law takes effect that wind energy advocates call an important step – and even a national model – for alleviating the chaotic and shifting patchwork of municipal and county siting regulations that can create great uncertainty and moving goalposts for wind developers.

The rule, drafted by the state’s Public Service Commission at the behest of state legislators, sets a limit on how stringent siting and other regulations can be for wind farms under 100 megawatts, but still gives local governments the opportunity to appeal for an exception.

Many states have an agency that issues permits for all major wind farms on a case-by-case basis. However, most states lack uniform, enforceable standards governing wind turbine siting, leaving regulatory decisions to local governments.

This is seldom an issue when wind farms are built in remote areas. But in more densely populated parts of the Midwest, disputes over wind farms have prompted local governments to pass rules that – wind proponents say – are often driven more by local politics and vocal activists than sound science.

In response, wind developers and advocates are increasingly discussing statewide standards or guidelines – like Wisconsin’s new rules – that still allow local input while imposing some objectivity and uniformity on the siting process.

RENEW Wisconsin executive director Michael Vickerman said the law – the result of a three-year process involving advocates, developers and state and local officials – should be key in helping the state continue to develop its ample wind resources and help prevent local governments from passing “de facto moratoria” on wind farms, as has happened throughout the Midwest in recent years.

“We have seen many, many cases where local governments went way overboard and adopted setbacks that were basically designed to stop projects before they could get a foothold — the equivalent of electric fences around the county saying ‘Danger wind developers — keep out,’” he said.

The state Public Utilities Commission, which grants permits for wind farms on a case-by-case basis, has asked an administrative law judge to decide whether it should honor the county’s regulation. A final decision could take months, jeopardizing federal stimulus funding that is contingent on the $180 million project going online by the end of 2011.

“We’d been pursuing this permit for a year well in excess of existing rules, then at the last minute the rules changed under us,” said Burdick, noting the PUC has approved several other wind farms with 1,000-foot setbacks in recent months. “This is just ridiculous, it’s an absurdly large setback the county is asking for, and it’s not about health or safety, it’s about politics.”

Under Minnesota’s rules, wind farms under 25 megawatts must be set back at least 500 feet from non-participating property owners, and PUC spokesman Dan Wolf said the agency also considers that a baseline requirement for larger projects.

Wolf said there could in the future be statewide siting standards, either set through legislation or by the commission, but nothing is in the works now.

Life among the turbines

Restrictive local ordinances are often prompted by the experiences of people who live near large wind farms.

Neighbors of a wind farm built by NextEra Energy Resources in DeKalb, Illinois, say turbines 1,400 feet from their home create disturbing shadow flickers and mechanical droning and whooshing noises that constantly keep them up at night.

Dave and Stephanie Hulthen, who write a blog called “Our Life With DeKalb Wind Turbines,” stress they don’t oppose wind energy, but feel their lives have been greatly altered by the noise and stress created by turbines that, they say, are way too close.

“I was born and raised here, it was always peaceful, it was my sanctuary,” said Dave Hulthen, 34, who works as a cabinet-maker and roofing consultant. “Now we have to come home to this – it puts a whole other stress on your life. I don’t sleep like I used to, and when you suffer sleep deprivation it affects all other areas of your life.”

About 40 landowners near the NextEra wind farm are suing the company and the county board which granted zoning approval, and a number of Illinois counties have proposed policies considered de facto moratoria on wind farms, likely influenced by opposition to the NextEra project. A NextEra spokesman said he couldn’t comment on the situation because of the lawsuit.

Illinois, like Wisconsin, is a “home rule” state, where local governments have the explicit right to make their own policies protecting the public good. Kevin Borgia, director of the Illinois Wind Energy Association, said the home rule provision means a statewide policy is probably unlikely in the near future. But Borgia said he hopes isolated cases of wind farm opposition don’t torpedo support for wind energy in general.

“If you ask me, counties need to know what they’re giving up if they were to propose such a restrictive standard,” he said. “People who think wind farms are an industrialization of a rural landscape don’t want to see them. If you get enough people in a county who don’t want wind farms, they have a democratic right to prevent them. But those people lose a lot – the property tax revenue that won’t come in, the landowners who won’t be paid, the jobs that won’t come in, the clean energy that could have been generated.”

Are local voices being shut out?

The new Wisconsin rules faced significant opposition from residents of Brown County near a proposed 100-turbine project by the Chicago developer Invenergy. The new rule doesn’t actually apply to the Invenergy project, since it is over 100 megawatts, but locals and developers expect the rule will also guide the Public Service Commission’s decisions on larger projects.

Members of Brown County Citizens for Responsible Wind Energy say they would support a statewide rule that met their standards, but the new rule, they say, doesn’t adequately protect local health and well-being.

Group spokesman Steve Deslauriers says citizens opposing the proposed rule at an October hearing were ignored, and that the statewide rule doesn’t adequately account for geological differences, including the karst geology of northeastern Wisconsin, which he said could increase the chances of groundwater contamination.

Wind proponents stress that local authority and input are crucial, and any state standards must be flexible enough to take the unique geology, geography and social structure of any given location into account.

“A set of accepted standards that can be applied consistently at large would be helpful, though that doesn’t minimize the importance of working with local officials,” said Josh Gackle, western regional policy manager of the advocacy group Wind on the Wires. He said pushing laws through the state legislature isn’t an ideal route since “there’s always a risk it will morph into other things – especially considering all the back and forth around sound, shadow, those types of issues where there’s a lot of he-said, she-said.”

Working without a net

In Michigan, wind proposals must comply with various environmental and land use rules and obtain approval from several state agencies, but there is no centralized siting authority. Scott Howard, an environmental attorney who has represented individuals and communities seeking to build single turbines or small wind projects, thinks state policy could help spur wind development as long as it provides ample room for community input. With less than 200 megawatts, Michigan lags far behind other Midwestern states in wind generation.

“The one advantage to local regulation is you have additional contact sensitivity – the community knows itself best,” Howard said. “But having state resources and some state level consistency can be a helpful thing.”

Michigan state legislators this fall debated – but didn’t act on – bills regarding offshore wind development in Lake Michigan, a hot topic since at least 2009 when the company Scandia proposed a wind farm four and a half miles offshore near the town of Ludington. The bipartisan legislation, which could be reintroduced, would have prohibited turbines within three miles of shore and mandated all offshore projects get approval from any county within six miles.

Iowa Wind Energy Association executive director Harold Prior said the industry there has thrived despite a complete lack of state siting authority, in part because residents have seen the economic benefits of wind, from property tax revenue to turbine manufacturing. Iowa is the country’s second-largest wind generator after Texas, with more than 3,600 megawatts.

“Iowans have a real appreciation for the wind industry because they see how many jobs, how much economic development this industry is bringing to Iowa,” he said.

Wind on the Wires spokesman Jamie Karnik said that especially in states where people have less direct experience with wind energy, educating residents about the realities and benefits is a key part of drafting uniform standards with popular support.

“We’re seeing this come up more and more,” he said. “In the past we’ve developed often where there’s a lot of wind and not a lot of people. But as projects move closer to populated areas, this becomes more of an issue. And we are starting to figure it out.”

Photo by markellis_1964 via Creative Commons