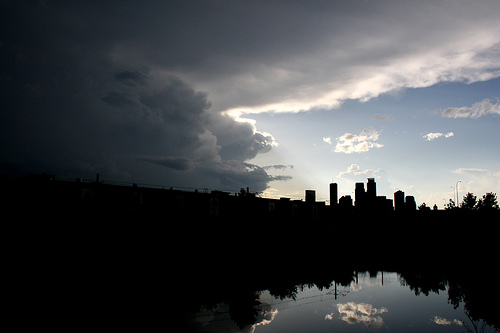 Climate change could be a boon for the Midwest’s urban centers, says UCLA economist Matthew Kahn, but regional climate experts do not share his optimistic outlook.

In his recent book Climatopolis – How Our Cities Will Thrive in a Hotter Future, Kahn argues that as the planet warms up, winters in cities in the Great Lakes region will become milder, while summers remain pleasant. Meanwhile, coastal and Southwestern metropolises like Miami, New York or Phoenix will face ever more frequent flooding and scorching heat.

The Midwest will boom as industries and skilled workers relocate away from danger zones along the coasts, Kahn argues.

“If climate change plays out the way it’s been predicted to – drought in the West, extreme heat, and coastal flooding – then I do predict that there will be migration back to the Midwest,” said Kahn.

But many climate scientists and government specialists are skeptical about Kahn’s claims. They doubt that the Midwest will be among climate change’s winners, or even that there would be winners at all.

“I don’t know that there will be benefits,” said David J. Thornton, the assistant commissioner for air policy at the Minnesota Pollution Control Agency. “I certainly wouldn’t want to dismiss that possibility. But everyone has the same limitations. We know where we’ve come from and where we are today, but it’s really hard to extrapolate that into some meaningful information about what the situation might look like in twenty or thirty years, and what you need to do to prepare for it.”

One area of uncertainty is what a warming atmosphere will mean for the region’s already unpredictable weather, and how government services will need to adapt in response.

Many climate experts predict the region will suffer more extreme heat waves and thunderstorms. Counter-intuitively, warmer winters may lead to more snow – and spring flooding – as well as dangerous ice storms and traffic accidents. Flooding may lead to raw sewage spills in lakes and waterways in cities such as Milwaukee, which has shared sanitary and storm water systems. Roads, bridges and other public infrastructure would have to be upgraded to withstand the water.

Energy use will also shift throughout the Midwest. While a warmer climate could reduce winter heating costs, cooling costs in summer would rise. According to regional studies by the Washington-based International Council for Local Environmental Initiatives (ICLEI), the extra energy would likely be generated by coal-fired power plants, causing a rise in fine particulate and ozone pollution in summer, when they are most likely to cause respiratory illnesses, in addition to pumping more greenhouse gases into the atmosphere.

Still, Kahn believes that there are substantial benefits to be reaped for the Midwest. Cities compete for the young and skilled, he said. And if quality of life along the coasts deteriorates due to climate change, the economic geography of the country may change profoundly.

“For years, cities like Detroit and Cleveland have been exporting their young and skilled to the coastal elite cities”, said Kahn. “This may reverse in the face of climate change. I think we’re going to get a more equal distribution of money and power.”

The Midwest could accommodate such climate migrants, said Karin Berkholtz, community planning manager for the City of Minneapolis.

“Our city, in the early 1950’s, had a much greater population than we do today. Through the advent of the interstate system and people moving out to the suburbs, we actually lost population,” said Berkholtz. “Our infrastructure systems are sized for 500,000 people living within the city of Minneapolis. We definitely have the ability to accommodate that.”

Kahn says he expects climate change to happen gradually, making it easier for Midwest cities to adapt, and accommodate newcomers. Nemet, however, shares the view of many scientists that the climate could change suddenly and disruptively, and that such optimistic projections are far from certain.

“The issue is how quickly they have to move,” he said. “If you move preemptively, looking for opportunities, that’s considered migration. You could have skilled knowledge workers doing that. But if you have to move quickly, without much choice, you’re considered a refugee. The more gradually things happen, the better the outcomes. If climate change is more disruptive, then it’s less likely you’ll see positive outcomes.”

An omen of things to come might be the aftermath of Hurricane Katrina in 2005, when tens of thousands of New Orleans residents sought shelter in Houston, Texas, straining that city’s public services, and causing crime rates to spike.

Climate migrants may have to leave places like New York or Miami under comparable emergency conditions, putting a similar strain on Midwestern host cities.

“What happens in other places affects the Midwest”, said Nemet. “The idea of other places suffering, and the Midwest remaining high and dry, is a pretty optimistic, unrealistic perspective on things.”

In any event, Midwestern cities are in the early stages of assessing climate change, said David Thornton, who is a member of Minnesota’s new Interagency Climate Adaptation Team, which will advise state and local governments on how to deal with its effects.

“There are some cities that have done quite a bit of work, but the ones that really stand out, are the ones that are most concerned about coastal flooding”, Thornton said. “I think it’s certainly time for us to begin thinking about how we’re going to prepare for it.”

“Everything is a matter of degree”, added Berkholtz. “Of course we would be impacted in some ways, too. So you have to make sure that you’re planning ahead and managing your resources well.”