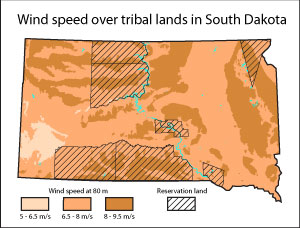 Michael Jandreau, tribal chairman of the Lower Brule Sioux Tribe in South Dakota, regularly looks out over the wind-swept land that stretches before the tribe’s headquarter west of the Missouri River and imagines the possibilities.

“The obvious potential is here – the open land, all the wind that could go into the system and create so much energy,” Jandreau said. “And yet as much as we might like it to, nothing gets done; there are too many obstacles in the way of allowing progress.”

Entrenched poverty, geographic isolation and unique legal issues tied to the tribes’ sovereign status have conspired to prevent notable movement toward developing wind energy enterprises in Indian Country in South Dakota, a state routinely ranked among the top five in the country for its sheer amount of wind.

Which of these culprits gets more of the blame? It depends upon whom you ask. But the tribes’ collective poverty stands between them and developing projects on their own. The other matters join to discourage private developers.

Nations within a nation

From Jandreau’s view, it boils down to the fact that tribes, as quasi-sovereign nations, must contend with a jangle of state and federal rules and regulations that make development of all kinds, including energy projects, slow to put together. So slow, in fact, that most businesses that Jandreau talks with end up losing patience and walking away, leaving the tribe nothing to show for its outreach efforts.

For instance, Jandreau said, federal rules that apply to tribal land prevent the construction of towers – including wind turbines, according to what Jandreau says federal authorities tell him – that could obstruct whooping crane flyways. This creates a potential deal-killer on Lower Brule land, but not on private land a few miles away, he said.

“That affects us, yet as the crow flies, just a few miles away, this is not an issue,” Jandreau said. “Any rational person would see that doesn’t make any sense.

“It makes it much more strenuous,” Jandreau added. “It binds our hands in terms of economic development.”

The Lower Brule reservation, along with the Rosebud, Pine Ridge, Cheyenne River and others – there are nine reservations in South Dakota – stretch out over wide swaths of open land in the state, area ripe with natural energy. The American Wind Energy Association ranks South Dakota 4th on a list of windiest states, behind only North Dakota, Texas and Kansas.

But those who have tracked their efforts on the wind energy front say the tribes, because they function as sovereign entities within the U.S., are more difficult to do business with.

Steve Wegman, executive director of the South Dakota Wind Energy Association and the state’s informal wind energy historian, blames the fact that the tribes do not have a uniform commercial code – something many states have in place to simplify terms of financial transactions and streamline how business deals get done across borders. Investors and developers interested in building on tribal land, Wegman said, ultimately get confused or frustrated because they cannot determine costs. A few miles away from tribal land, however, sorting out the details is simpler, and developers inevitably head that way, he said.

Moreover, Wegman said, Native American tribes have many of their own laws; they have their own police departments and tribal courts. Congress, when first establishing the reservation system, did not fully account for inevitable conflicts between tribal law and U.S. law, he said.

“There is no provision to handle bankruptcy, for example, among the tribes here,” Wegman said. “Indian tribes cannot go bankrupt, and that obviously makes financing a big wind energy project very difficult. … There is nothing to really mesh the Native American laws and U.S. laws. It’s very hard for corporations to do business on Indian reservations as a result. … This is a hell of a challenge.”

There is a small-scale wind farm on the Rosebud reservation, but it was built with federal grants. To date, it marks an isolated and small effort. Wegman said there have been various plans and discussions about larger wind projects on South Dakota’s reservations over the past several years, “but I don’t see any real movement. No project of any size or involving any private money has taken off. We’ve seen plenty of studies and plans, but nothing substantive has developed.”

Wegman estimated it costs roughly $2 million to build and open a fast-food restaurant, and yet they are few and far between on reservations. It costs about $100 million, he said, to build a 50-megawatt wind farm. “So you can get a sense of the odds of that happening,” he said.

What’s more, while wind energy has taken off in eastern South Dakota – with big projects near Brookings and Watertown to transmit power east to Minnesota and farther – western South Dakota is at a relative disadvantage.

Wegman said there are only about 100 megawatts of transmission capacity in western South Dakota, where the state’s largest reservations lie. Given the barriers to private investment, he said massive federal grants would be needed for grid upgrades. But that is not likely to happen any time soon, as Washington has its hands full with everything from financial reform to two ongoing war efforts.

“Just getting it out of South Dakota from the west, we don’t have the capacity. Without better transmission capability, I don’t see anything happening,” Wegman said.

“I’ve talked with all of the tribes over the past couple years,” he added, “and there is a tremendous amount of interest,” but the roadblocks are too immense.

Like tribes in other states, the Sioux in South Dakota own and operate casinos. And while the casinos have become important sources of revenue, tribal lands in central and western South Dakota are located off the beaten path, in areas far from other commercial development. As such, the casinos there have hardly proven cash cows, and would not be a reliable source of financing for major wind energy investment, according to Ralph Brown, an economist and professor emeritus at the University of South Dakota who has researched reservation economies in the state.

Other signs of economic life are hard to find in places such as Rosebud and Pine Ridge and Crow Creek. All three are in counties that, in the 2000 Census, were among the 10 poorest in the nation. Unemployment hovers around 70 percent. Crime and drug abuse is rampant.

“For the most part, the large reservations – including Rosebud, Pine Ridge and Crow Creek – they are genuinely impoverished,” Brown said in an interview. “The casinos, of course, have helped some, but they’ve never really taken off in terms of spurring other notable economic growth.”

The deeply rooted troubles, dating back to the creation of the reservation system in the 1800s, “make it difficult to drive private capital to the reservations,” Brown said. “It’s been a real problem.”
Jandreau acknowledges the long-running struggles. He notes that there are successful businesses on some reservations, including profitable farming operations on Lower Brule. But developers, Jandreau said, ultimately tell him they have little reason to patiently try to clear the myriad hurdles found on tribal land when they can go to a neighboring county, to land owned by private South Dakota residents, and move faster.

“We haven’t given up on the idea” of wind energy on Lower Brule, Jandreau said. “We see that it has great potential. But while for us, and more broadly the people’s energy needs, this may be about energy – a better energy – it’s still also about an industry filled with hard-nosed business people. It’s about the cash, and the fastest way to it.”