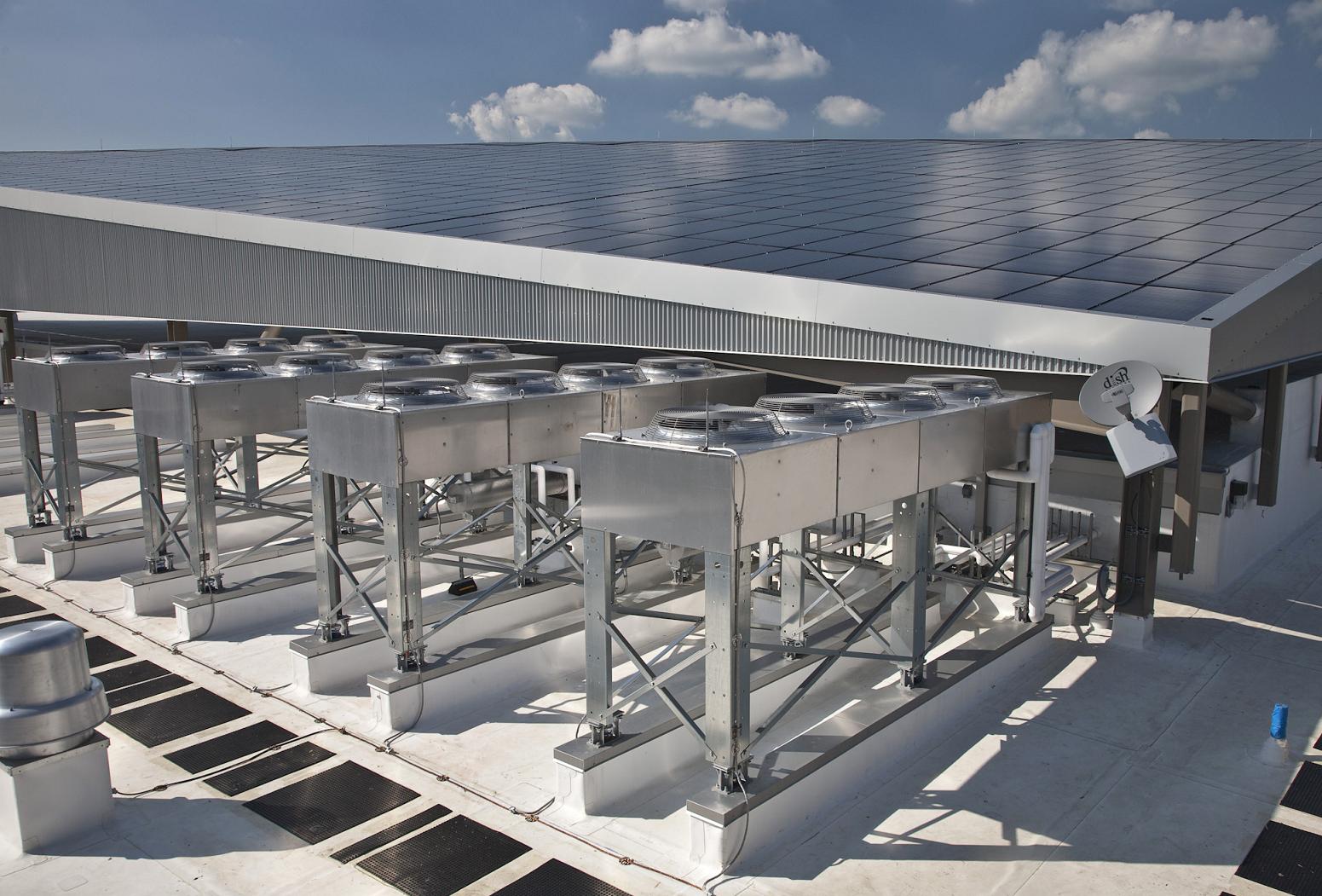 In St. Louis last summer, Emerson Network Power opened a new data center with a rooftop array with more than 550 solar panels. It’s the latest among several recent efforts by the industry to use renewable energy to help meet growing power demands.

Data center power consumption is increasing, driven by our ever-growing array of computers, laptops, smart phones and other devices. The Environmental Protection Agency estimates that utility costs for U.S. computer servers will be $7.4 billion this year, up from $4.5 billion only five years ago.

Though there have been some improvements in efficiency, typically, the more powerful the data server, the hotter it runs. So it needs not only additional power in order to run, but also additional power to cool the facility so the computer equipment doesn’t fail. Data centers can use anywhere from 10 to 100 times as much power as a similarly sized office building.

“Powering and cooling a data center costs about 1.5 times as much as the capital equipment,” adds Rob Davis, vice president of energy services at Greenhouse Holdings in San Diego.

James Coakley, president of Power Loft Services, LLC, McLean, Va., says his firm designs equipment today that needs only 28 percent of the power compared to data centers of only a few years ago for the same amount of processing, but the increasing processing demand is outstripping the power savings.

So the industry is using a combination of solar, wind power and some previously avoided methods to meet the growing demand, sometimes opting to pay more for the renewable energy than for energy from more commonly available sources, like coal.

“Solar power is incredibly expensive,” says Jack Pouchet, Emerson’s director of energy initiatives. “However, there are a lot of plans and programs to help mitigate that cost. If you use solar, you have depreciation benefits that consumers can’t get. Biodigester (which use manure) plants are more economical. But they require a fuel source. We don’t think people downwind would be very appreciative if we were bringing in a lot of manure here. Solar shows the community and our employees that we are committed to this stuff.”

Emerson had also looked at wind power for its St. Louis facility, but the heavily forested area surrounding the data center would have required towers that were much taller, and therefore much more expensive than the norm.

However, wind power was a factor in the company’s decision to locate a smaller data center in Marshalltown, Iowa. “You can drill down to the microgrid – the nine-digit ZIP code — to find out where wind power is prevalent,” Pouchet said.

And despite notoriously hot, sticky summers, natural air cooling is being used in the Midwest as well.

Natural air cooling, which data center managers had typically avoided for fear of particulate contamination, are now being embraced more fully as recommendations for operating temperatures have increased and filtering and monitoring systems have improved, according to Davis.

The natural air cooling systems, as the name implies, use outside air when the temperature is lower than that of the data center. So they are popular for data centers in the Midwest and other northern regions. But they are even used in the South as facilities try to combat the increasing cost of cooling.

Prior to 2004, data centers were kept at relatively low temperatures, around 68 degrees, according to Don Beaty, a consulting engineer who’s worked extensively on data center cooling standards. “The thought was that cold was better and there was no quotable source for operating temperatures other than each equipment manufacturer’s published requirements,” he said.

In 2004, the American Society of Heating, Refrigerating and Air Conditioning (ASHRAE) published guidelines with standardized operating temperature of anywhere between 68 and 77 degrees. After further study in 2008, the ASHRAE raised the recommendation to 81 degrees, and now is looking to raise the recommendation even higher.

Improved monitoring and filtering help facilities quickly recognize when the outside air is low enough to use and if a filter is failing, Davis says.

However, Pouchet cautions that natural air cooling systems, even with improved filtering and monitoring, are still more subject to failure than closed systems so any gain in energy efficiency has to be measured against increased risk of occasional outages.

Geothermal energy systems that rely on cooler temperatures deep underground have generally been considered an impractical solution. However, ACT, providers of the well-known college entrance exam, worked with project engineers to develop a geothermal system that helps cool their 10,000-square foot facility in Iowa City.

The data center uses a geothermal “bore field” – an array of vertical holes drilled into the ground that house a closed-loop, water-filled piping. The cool ground enables the underground piping system to serve as a heat exchanger. The ACT data center also has an exterior dry cooler as a backup to the geothermal system.

Tom Struve, ACT assistant vice president, estimates that the geothermal system saves 30 percent of the electrical cost for the facility.

Sometimes rather than concentrating on renewable energy, some data centers are finding innovative ways to use the excess heat from their facilities. For example, the University of Notre Dame Center for Research Computing is putting a rack of computer nodes at the local South Bend Greenhouse and Botanical Conservatory, which uses the excess heat from the computers to warm the facility.

Phil Britt is a veteran journalist based in suburban Chicago.