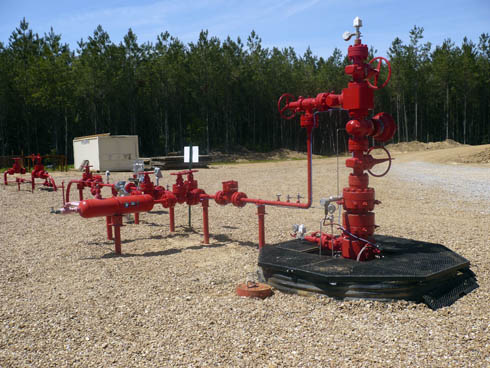 A carbon dioxide injection well in Mississippi. (Photo via Department of Energy)

A pipeline to carry carbon dioxide from Midwestern coal gasification plants to Gulf Coast oil fields – announced with much fanfare in 2009 – is currently in a holding pattern with no confirmed suppliers.

But developers and proponents continue to push the pipeline and gasification plants as a lynchpin of the Midwest’s energy future, while opponents call it a financially and environmentally irresponsible idea that will ultimately perpetuate our reliance on fossil fuels.

The pipeline would transport compressed carbon dioxide in liquid form from plants that burn high-sulfur Illinois basin coal and petroleum coke from oil refineries to make syngas and synthetic natural gas for sale to utilities. The carbon dioxide would then be injected into oil fields to increase production.

Denbury has signed conditional contracts with at least four proposed gasification plants and completed a feasibility study, but has no confirmed sources of carbon dioxide. It will need three to move forward, according to company spokeswoman Laurie Burkes, who declined to comment further.

‘Chicken or the egg’

“It is chicken or the egg,” said John Thompson, director of the Coal Transition Project of the Clean Air Task Force and a proponent of the pipeline and gasification plants. “All of these projects aren’t going to be able to finance without certainty for investors about the next step – having a solution for carbon dioxide. Investors want absolute certainty that they have a place to put it. Increasingly these projects are interconnected — they need to get the pipeline built, the pipeline needs them.”

Denbury has proposed two routes of 500 to 700 miles. Both would tap carbon sources in Illinois, Indiana and western Kentucky, with one possible route going south through Missouri and Arkansas, the other through Tennessee and Mississippi, to connect with the company’s existing Gulf Coast pipeline network. Denbury is also seeking the power of eminent domain for the pipeline, which some say it will need to make the project financially and pragmatically feasible.

A gasification plant near Rockport, Indiana, that has signed a contract with Denbury needs the carbon dioxide pipeline “or something similar” to justify a $2.7 billion investment, according to Donald Maley, vice president for energy investment for Leucadia National Corporation. Testifying before the Indiana Utility Regulatory Commission in January, Maley said, “we are very bullish that between ourselves and Denbury, we will find a way to build that pipeline.”

One of the projects that had signed a contract with Denbury, Tenaska’s Taylorville Energy Center, received a possible death blow in January when the Illinois Senate – for the second time – voted down a bill crucial to the project, largely because of concerns about utility rate increases for large industrial customers.

Project spokesman Dave Lundy said it is unclear if Tenaska will continue to push the plant, which would have moved about three million tons of carbon dioxide through the pipeline annually. Lundy noted that a plant Tenaska is hoping to develop in Texas could make more than $100 million a year selling carbon dioxide for nearby enhanced oil recovery operations.

“But building and maintaining a pipeline is also expensive, so you get a greatly diminishing financial benefit for Midwestern carbon dioxide shippers, where instead of becoming a revenue stream it could become closer to a wash,” Lundy said.

Another gasification plant with a Denbury contract, in Cash Creek in western Kentucky, has received permits but still needs to secure financing and pass other regulatory hurdles.

Final permits are likewise in place for a gasification project with a Denbury contract in southern Illinois, proposed by Power Holdings of Illinois LLC. Leucadia is also trying to build a gasification plant on the south side of Chicago, which could connect to the Denbury pipeline. But it’s unclear whether the Chicago site, in one of the nation’s most polluted neighborhoods, will get the necessary permits to move forward.

The Illinois legislature passed bills in January mandating utilities buy gas from these two plants at above current market rates, but opponents including the Sierra Club and the Illinois Citizens Utility Board are asking Gov. Pat Quinn not to sign the bills.

‘A pipeline to nowhere’

A gasification plant in Edwardsport, Indiana, being built by Duke Energy has also been mentioned as a carbon dioxide source for the Denbury pipeline. That plant is about 65 percent complete, according to spokeswoman Angeline Protogere, but the company is still undertaking a study on carbon capture and seeking government approval to study carbon sequestration. Opponents doubt significant carbon capture will ever occur at the plant, which is mired in an ethics scandal involving a former state regulator who was seeking employment at Duke at the same time he oversaw the permitting process.

“This is a pipeline to nowhere,” said Kerwin Olson, program director of the Indiana consumer and environmental advocacy group Citizens Action Coalition. “There’s no project under construction today to produce enough carbon to facilitate this. The four plants remain nothing more than PowerPoint presentations – they remain years away from becoming economically viable or even breaking ground.”

Denbury currently operates more than 400 miles of carbon dioxide pipelines concentrated in Mississippi, Louisiana and Texas, bringing carbon dioxide to its Gulf Coast enhanced oil recovery projects. It also has oil and pipeline operations in Wyoming. In the past decade the company produced more than 28 million barrels of oil from enhanced oil recovery, according to a presentation to a House joint committee in 2009. Pipeline proponents envision a network with auxiliary pipelines connecting carbon dioxide sources throughout the Midwest and Gulf Coast, potentially including oil refineries, ethanol plants and other carbon sources along with gasification plants.

The pipeline could find itself in competition with the federal government’s plans for a major carbon sequestration site in the Mt. Simon geologic formation in Illinois, to be built in connection with the FutureGen 2.0 “zero emissions” coal plant. Carbon dioxide from FutureGen would be piped to a carbon sequestration site somewhere else in central Illinois, where carbon dioxide from other sources would likely also be stored.

John Thompson of the Clean Air Task Force said that a federal price or tax on carbon could also help drive the pipeline and gasification projects, giving companies more motivation to avoid pumping carbon dioxide into the atmosphere. But a price on carbon could also increase expenses for gasification plants, which would still likely emit some carbon dioxide even with a pipeline or sequestration outlet. Brandon Seitz, director of Indiana’s Office of Energy Development, said the pipeline and related gasification plants would “create the ability for the state to prepare for future legislation” putting a price on carbon.

Gasification plants could also theoretically rely on both a sequestration site and a pipeline to dispose of their carbon. Companies can receive tax credits of $20 per metric ton of sequestered carbon dioxide and $10 per metric ton used in enhanced oil recovery, if projects meet certain qualifications.

Denbury says its oil operations have a net effect of reducing carbon emissions, with 24 to 52 percent more carbon sunk into the earth than is released from the oil that it helps extract. However, some major environmental and advocacy groups oppose government support for enhanced oil recovery, saying it is not a valid option for addressing climate change.

“We need to call this what it is,” said Zac Elliot, statewide organizer for the Citizens Action Coalition. “They want to use carbon to yield more carbon and call it sequestration. That’s ridiculous. They’re trying to turn carbon into a commodity, to pipe it around the country and make a lot of money off it.”