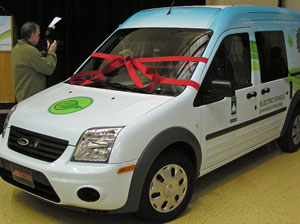 In a bid to catch up with their coastal counterparts, Midwestern cities are racing to acquire electric vehicles and build charging stations – steps backers say will save on gasoline, cut emissions, and show drivers that there is life after the internal combustion engine.

The city of Chicago just announced plans to build an extensive vehicle charging infrastructure reaching well into the surrounding suburbs. Chicagoland will be dotted with 280 fast-charging stations that will enable EV drivers to charge their batteries to 80 percent of capacity in under half an hour.

And officials in St. Paul, Minnesota, recently received the first of three battery-powered Ford Transit Connect vans they plan to add to the city fleet over the coming months. At the same time, the city plans to install thirty charging stations, most of which will be open to private electric vehicle owners as well.

St. Paul mayor Chris Coleman said the vans are part of a region-wide strategy “to have more electric vehicles, and have more charging stations, so that people can transition into a greener, cleaner technology.”

Coleman anticipates the city will be replacing more and more gasoline-powered vehicles with electric ones in the future.

Not just for the West Coast anymore

Adoption of electric vehicle infrastructure in the Midwest lags behind traditional green bastions like Portland, Seattle and San Francisco. But a number of cities, such as Minneapolis-St. Paul, Chicago, Madison and Indianapolis, are developing ambitious plans to make up for lost time.

Chicago does not have any full-size electric vehicles in its city fleet road yet, but plans to acquire them in the near future, said Joshua Milberg, the first deputy commissioner at the city’s environmental department.

“We are looking at what are the right options for electrification of the city fleet,” said Milberg.

Chicago already has a number of smaller, low speed EVs, and is currently looking into electric buses, cars and even trash trucks. Milberg expects that within the next decade, twenty percent of all vehicles on Chicago’s roads will be either hybrids or fully electric. But “We still have a lot to learn about electric vehicles and charging,” he said.

Eyes on the bottom line

Meanwhile, St. Paul is closely monitoring its first all-electric Ford Transit Connect, being used by the city’s park service to ferry supplies and equipment between facilities.

The vehicle – a boxy delivery van – can travel at highway speeds and has zero tailpipe emissions. Perhaps even more importantly for cash-strapped municipal governments, it is projected to be much cheaper to operate than its gasoline-powered competitors.

St. Paul currently spends $3 million annually on gasoline and diesel. The fuel cost for a gas-powered Ford Transit Connect is estimated at $10,000 over six years, compared to $2,600 for the electric model. With gas prices at their highest levels since 2008, and expected to rise further, mayor Coleman said overall savings would be “absolutely significant.”

EVs will also contribute to cleaner air – an estimated one-third of Minnesota’s air pollution is caused by cars and trucks.

The St. Paul EV project is the result of a public-private partnership between the city government, non-profit groups (including Fresh Energy, which publishes Midwest Energy News), Xcel Energy, the Ford Motor Company, and several other private enterprises.

The city is spending $286,000 in federal stimulus dollars on the project. At the vehicle’s recent formal introduction, local leaders said the stimulus plan is essential to renewable energy initiatives.

“Ten years from now, we’ll almost chuckle at the fact that we stood here and celebrated a couple of new cars,” said Minneapolis Mayor R.T. Rybak. “But it is critically important to have government lead the way on this, because we need to move forward faster, and in a period of time when the economy is slowed, we can both clean the environment and create new jobs.”

Similar private-public partnerships are underway in Chicago, which is working with car-sharing services i-Go and Zip Car to build new charging stations.

“We feel that’s a great way to introduce all electric vehicles to a broad range of consumers,” said Milberg.

In the Twin Cities, charging stations will initially be concentrated around the Central Corridor light rail line between St. Paul and Minneapolis, which is currently in the early stages of construction. The first units will be rolled out starting this spring, long before the rail line’s planned completion in 2014.

Recently, St. Paul has been getting questions from prospective private EV owners, who want to be able to charge their vehicles while parked downtown, said Anne Hunt, the city’s environmental policy director.

St. Paul plans to install thirty publicly available charging points over the coming months, said Hunt. “Most of them will be in parking ramps, but we’ll have a few that will be on the streets – like a parking meter, but it’s a charging station.”

“We’re trying to make sure the Twin Cities are EV ready” said Hunt. “If anything, we’re a little bit behind the curve.”