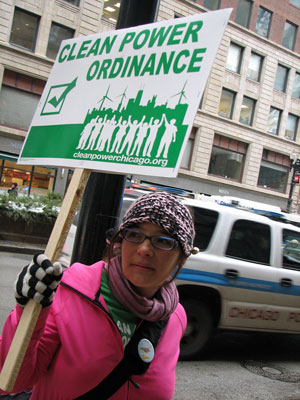 Chicago public health and environmental organizations and grassroots community groups thought they would be celebrating Valentine’s Day at a long-awaited city council committee hearing on the proposed Clean Power Ordinance, which would force the city’s two archaic coal-burning power plants to either shut down or convert to natural gas.

But the hearing, which is needed to move the ordinance to a full council vote, was abruptly canceled after a coalition put out a press release about it.

Advocates called the situation one more example of how, for the past decade, efforts to clean up the coal plants have repeatedly hit a political stone wall — in a city known worldwide as an environmentally innovative metropolis led by “Green Mayor” Richard M. Daley.

On Monday, the city councilman who proposed the ordinance, Joe Moore, instead chaired an ad hoc hearing in the council chambers where doctors, environmental leaders and activists testified about the effect of the Fisk and Crawford generating stations, owned by Midwest Generation and located in the southwest side Chicago neighborhoods of Pilsen and Little Village.

Proponents hope the event, which drew about 300 citizens, will help convince the city council to actually hold a committee hearing and pass the ordinance.

Midwest Generation spokesman Doug McFarlan said he was never told of a committee hearing and called the ad hoc hearing “a carefully staged and choreographed rally organized and attended by the people who have been trying to shut down the plants.”

“We have been very open with aldermen and the mayor’s office that we do not believe a hearing on this ordinance is warranted by the facts and our record,” McFarlan said. “We feel strongly that anyone who takes a thoughtful look at our record and at state and federal regulations that are already in place or under development will see that there is no need for a city ordinance which would only serve to eliminate good union jobs and risk the reliability of the city’s electricity grid.”

In 2002 powerful city councilman Ed Burke introduced an ordinance that would have forced the plants to drastically reduce their sulfur dioxide and nitrogen oxide emissions, but the ordinance was never brought to a committee hearing, and it was never backed by Daley, a virtual requirement for any ordinance to pass in Chicago. In April, Moore introduced a new ordinance demanding the plants reduce their particulate matter and carbon dioxide emissions to levels attainable only by switching to natural gas.

Midwest Generation officials have said it would not be financially feasible to make that conversion and called it a “shut-down ordinance.” Company spokesmen said if the ordinance passes they would likely challenge the city’s authority to regulate power plants in court.

Environmental organizations say the Chicago ordinance could be a national model for other municipalities with aging coal-burning plants within city limits.

“If this passes it will be a domino effect,” said Sierra Club field organizer Christine Nannicelli, noting that “phase two” of the Sierra Club’s national coal campaign involves targeting existing coal plants, since proposals for more than 100 new coal plants have been taken off the table in recent years.

Four of Chicago’s 52 city councilmen attended the ad hoc hearing, and Reps. Mike Quigley and Jan Schakowsky, who represent Chicago districts, sent statements in support. Sixteen city councilmen have co-sponsored the ordinance, which needs 26 votes to pass. But even if a majority of councilmen support the ordinance, a committee hearing must be called for it to progress to a vote.

“If citizens are demanding a (committee) hearing and if the normal procedure is to have a hearing, there should be one,” said Faith Bugel, senior attorney at the Environmental Law and Policy Center, which last year released a study saying the two coal plants cause $127 million in public health costs per year. “Obviously some members of government don’t want this. As to why is baffling.”

Midwest Generation has donated generously to city and state politicians, including city councilman Danny Solis, who has not supported the ordinance and who represents the Pilsen neighborhood where the Fisk plant is located. The company, a subsidiary of Edison International, donated more than $50,000 to Solis’s campaigns over the past decade. His office did not return a call.

Advocates say James Balcer, a long-time councilman who had recently been named head of the health committee, in meetings with them had promised to schedule a committee hearing on Feb. 14. Balcer did not return calls for this story.

On Feb. 22, a new mayor and city council will be elected, a major political shift which proponents say could potentially clear the way for the Clean Power Ordinance. Three of the four major mayoral candidates have endorsed the proposal. The front-runner, former White House Chief of Staff Rahm Emanuel, has not, but said on a questionnaire that “Midwest Generation must clean up these two plants, either by installing the necessary infrastructure to dramatically reduce the pollution they emit, or by converting to natural gas or another clean fuel.”

A neighborhood struggle gets the world’s attention

Two neighborhood groups – the Pilsen Environmental Rights and Reform Organization (PERRO) and the Little Village Environmental Justice Organization (LVEJO) have gained international attention for their efforts, largely volunteer, to force the coal plants to reduce emissions or shut down. In 2003 they collected enough signatures to place non-binding referenda on the city ballot in two precincts asking whether people supported massive emissions reductions; more than 90 percent did.

Activists have held funeral marches on Dia de los Muertos (Day of the Dead), a traditional Mexican holiday, commemorating premature deaths likely caused by the plants. During Chicago’s bid to hold the 2016 Olympics, they held a “Coal Olympics” where youth jumped “hurdles” of cardboard coal-fired plants and mountains with the tops removed. During the Chicago Marathon activists dropped a banner along the course near the Pilsen coal plant. They’ve protested numerous times at City Hall, setting up dioramas of strip mines and coal plants, wearing gas masks or shrouded in body bags.

In the past few years, environmental groups including Greenpeace, the Sierra Club and the Natural Resources Defense Council have also made the Chicago coal plants a focal point of their national campaigns against coal, highlighting the health, environmental and climate change impacts of coal mining, coal-fired generation and coal ash disposal. Chicago youth who live near the power plants have visited West Virginia towns torn apart by strip mining, and in January, West Virginia activist Larry Gibson spoke to residents in a café near the Crawford plant.

LVEJO youth organizer Ian Viteri said locals see the canceled committee hearing as another example of how they feel their neighborhood is disregarded by those in power.

“We’re always getting jerked around — we take two steps forward and then get pushed one step back,” he said. “We got really excited that there was a hearing scheduled, and then it was taken away.”

Until the new mayor takes over May 16, advocates have a two-fold strategy of both garnering support from the incoming administration and trying to push the ordinance through in Daley’s final days.

“The mayor still has the potential to do this as a green legacy issue ,” said Brian Urbaszewski, director of environmental health programs for the Respiratory Health Association of Metropolitan Chicago. “But there’s no indication yet that he will.”

“A green city cannot have black lungs, it’s just incompatible,” added Dave Kraft, director of the Nuclear Energy Information Service, in the ad hoc hearing. “If the mayor wants to make sure he has a green legacy, he needs to get this passed.”