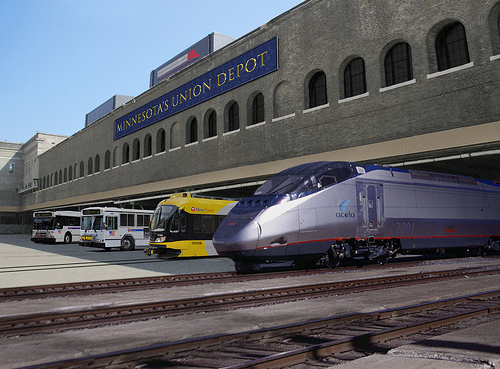 President Barack Obama recently announced a six-year, $53 billion high-speed rail plan that would connect the nation and give 80 percent of Americans access to high-speed rail by 2035.

Meanwhile, plans for Minnesota’s high-speed rail system — connecting St. Paul to Chicago, with links to Duluth, Fargo, and other cities — have come to a halt.

The St. Paul-Chicago rail line suffered a major setback when Wisconsin Gov. Scott Walker rejected $810 million in federal funds dedicated for a 70-mile line from Milwaukee to Madison, a key portion of the route.

But the biggest obstacle for high-speed rail in Minnesota might be that other states have already sped far ahead in generating state funding and plans. Proponents admit Minnesota has years of catching up to do if it wants to win a portion of the federal pot dedicated to rail.

“Our project is not at a state of readiness,” says Dan Krom, director of the Minnesota Department of Transportation’s (MnDOT) Passenger Rail Office. “We are already five or six years behind where Wisconsin was when they applied for the Milwaukee-to-Madison money. And we’re getting further behind.”

In December, a total of $1.2 billion in high-speed rail money was reallocated to 12 other states after Walker and incoming Gov. John Kasich of Ohio turned down the funds that had been awarded, in part, due to their states’ previous support.

And on Wednesday, Florida Gov. Rick Scott announced his state will send back $2 billion in federal funding after canceling a Tampa-to-Orlando line.

But Minnesota has yet to receive any of the windfall.

So far, Minnesota has only received $600,000 in direct federal high-speed rail funds, for a study to be started in summer 2012, years behind its Midwest counterparts. The $1.2 million study (matched by $300,000 from MnDOT and Wisconsin DOT) will explore the current infrastructure used by passenger and freight lines to determine additional needs and costs for high-speed rail. Krom says the study will also look at environmental issues, such as where wetlands lie along the line. The Environmental Impact Statement should be available in late 2013.

The state’s political environment has changed as well. U.S. Rep. James Oberstar, a strong supporter of high-speed rail who served as chairman of the House Transportation and Infrastructure Committee, was defeated in the 2010 election. And for the first time in nearly 40 years, Republicans – most of whom are opposed to high-speed rail — control both the Minnesota House and Senate.

Rep. Mike Beard, the Republican chair of the Minnesota House Transportation and Finance Committee, is an outspoken opponent of high-speed rail.

“I think our first goal should be mobility,” he says. “But at the end of the day, individual people with their own set of wheels going about their own lives seems to be the most American thing we can do.”

Beard says his job over the next two years will be to give proponents a platform, but that’s all the representative from Shakopee (a Twin Cities suburb) promises to relinquish.

“I’d like to hear the report once it is wrapped up,” he says. “And that’s as far as this chairman plans to take it.”

Krom says Minnesota has at least four years of work to do if it wants to catch up to its neighbors in the high-speed rail track.

For starters, Minnesota has yet to outline a state source for rail funding. By contrast, the “Illinois First” program, approved by the Illinois General Assembly in 1999, dedicated a $100 million supplement to continue preparing existing rail lines for the advent of high-speed passenger and freight service.

In Minnesota, similar bills to introduce a funding source and improve existing infrastructure were vetoed by then-Gov. Tim Pawlenty. Krom says MnDOT is in the process of completing a study that can identify possible funding sources. But for now, the state funding is not enough to snare Minnesota a significant portion of federal funds.

Late last year, Minnesota was able to score a $40 million federal grant to go toward the $237 million renovation of St. Paul’s Union Depot, which is targeted to be Minnesota’s high-speed rail hub and will also be a stop on a new light rail line between St. Paul and Minneapolis.

The 2009 legislature identified bonding funds for rail transportation projects, including $9.6 million for Union Depot and $10 million for the Northern Lights Express, which would connect the Twin Cities to Duluth. (Beard voted against the bonding bill.)

From the Capitol to the Chamber

Despite the significant roadblocks, Democratic lawmakers say they still have a plan for bringing high-speed rail to Minnesota. Instead of doing battle for taxpayer dollars and bonding bills, proponents are taking their platform out of the corridors of the Capitol and straight to the Chamber of Commerce.

“If something doesn’t happen soon, we are going to be like the Wild West town where the train doesn’t stop,” says Rep Alice Hausman, who serves on the Transportation and Finance committee. “But the minute the business community starts supporting us, we will turn this thing around.”

Hausman says high-speed rail will improve on the current freight infrastructure, which she says will not only be good for reducing cost of freight and increasing the flow of product, but it will make the entire state more flexible and mobile.

“The business community has to be the one taking the leadership role in this,” she says. “It’s essential to our economic competitiveness.”

Sen. Scott Dibble, who serves on the Senate transportation committee, says businesses need to embrace the idea that high-speed rail serves as a major network providing mobility and access all over the Midwest.

“It’s not about serving major cities,” he says. “It’s about serving what’s in between. It has an economic benefit for everyone in the state.”

Krom adds: “If the money isn’t directed to the Midwest corridor, it will go to other projects that are moving ahead with support,” he says. “This has become a serious economic issue for us.”

According to OnBoard Midwest, a consortium of pro-rail individuals, organizations and businesses, high-speed rail will directly create 15,000 construction jobs and 57,000 permanent jobs in the Midwest. Minnesota alone will benefit from the creation of 1,600 permanent jobs and $2.3 billion in economic impact, the organization says.

However, Beard says he’s not convinced rail investment is good for economics or job creation.

“It’s always been the ‘green’ argument,” he says. “Let’s built things less labor-efficiently, then we can put people to work. I don’t buy any of it.”

Beard also says that public transit should be handled by private bus companies.

“We already have highways,” he says. “Let bus companies use them and compete for dollars.”

A new mixed-use development in a former parking lot near the Hiawatha light rail line in Minneapolis. (Zach K. via Creative Commons)

Krom says various studies have shown that every dollar spent on high-speed rail yields between $1.40 and $1.70 in return.

According to Metropolitan Council, real estate sales prices along the Hiawatha corridor, which connects downtown Minneapolis to the airport and the Mall of America, rose 83 percent between 2000 and 2004, while real estate values in Minneapolis as a whole climbed 61 percent. And a survey prepared by McComb Group Ltd. for Hennepin County in 2008 found that 37 percent of the 114 retail businesses along the corridor that responded had experienced sales increases ranging from one to more than 50 percent since 2002.

Beard, however, still remains unconvinced. “I’m not certain that the economics adds up, particularly when the existing infrastructure allows us to do it with a bus,” he says.

“You need to really convince me. It is about my thinking and my values,” Beard says. “I’m the chair.”

For their parts, Dibble and Hausman remain optimistic. “This goes beyond one election cycle,” Dibble says. “This is a long-term initiative with huge economic impact. The important thing is that we continue to engage all the stakeholders who will share its benefits.”

Krom, who has been working on high-speed rail in various incarnations since 1996, also remains undeterred. “We live in a political environment,” he says. “Despite that, we have adopted a state rail plan that sets a vision from now to 2030. And as the technicians, it’s our job to move forward with it.”

Molly Priesmeyer is a Minneapolis-based writer and reporter whose stories have appeared in the Star Tribune, Pioneer Press, Rolling Stone, Twin Cities Daily Planet, and others.