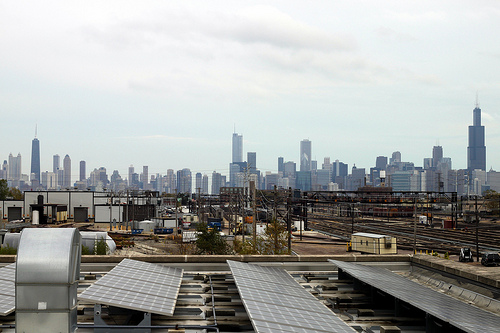 Solar panels at the Chicago Center for Green Technology. (Photo by Josh Koonce via Creative Commons)

From the looks of it, Michigan and Wisconsin have the two lowest renewable energy standards in the Midwest. The states have committed to ramping up their renewable use to 10 percent by 2015, while other states in the region, like Minnesota and Illinois, are shooting for more than 20 percent by 2025.

But there’s more to Renewable Portfolio Standards, or RPS, than just straight percentages. And while some states are aiming higher than others, there are ongoing battles in places like Missouri and Ohio over various methods that utilities can use to meet the marks — from buying out-of-state Renewable Energy Credits to producing solar power at in-state locations.

Still, some advocates say Michigan and Wisconsin should be shooting higher, or at least looking past 2015, based on successes in other states. Various studies show that renewable energy mandates have helped decrease the use of finite fossil fuels and increase economic development and jobs across the U.S. And the costs for renewable sources, like wind and solar, are becoming competitive with mainstays like coal.

“It’s not like you can just look at percentages and figure this out. There’s a lot of small print, said Galen Barbose, a staff research associate at Lawrence Berkeley National Laboratory, an arm of U.S. Department of Energy.

The RPS in Ohio, for instance, can fool some people. The standard is for 25 percent “alternative energy resources” by 2024.

But only half of that has to be met with renewables, Barbose explains. The other half can be met with everything from “clean coal“ to advanced nuclear technologies. Compared to Ohio, Michigan and Wisconsin will have a higher percentage of renewable energy by 2015 if the standards are met.

Irene Dimitry is director of energy efficiency and renewables for DTE Energy in Detroit. Her utility spent time researching rules in other states before the 2008 passage of Michigan’s 10 percent by 2015 standard.

“We found that it was very difficult to compare across states,” Dimitry said, “because different things qualified and just looking at the straight percentage requirement doesn’t tell you the whole story.

“Michigan’s 10 percent requirement doesn’t sound like so much as a percentage, but in terms of megawatt hours and what we actually have to build and produce, it’s an awful lot, and it’s more than most other states.”

Dimitry quotes a July 2009 report by SNL Financial that ranks Michigan fifth in the nation based on megawatt hours produced under 2014 benchmarks. Minnesota was No. 3, Illinois was No. 7, and Wisconsin was No. 13.

Barbose sees the Midwest RPS goals as ambitious, but typical of other states.

“In the early stages of an RPS, the challenges usually lie in the policies themselves,” he said. “The policies are imperfectly designed.”

Barbose said Midwest states are in different stages of compliance with their RPS policies, so some are experiencing “growing pains” while others haven’t gotten that far.

Minnesota utilities are on track to meet a 25 percent by 2025 standard, which applies to most utilities there, according to the state’s Office of Energy Security.

While Wisconsin and Minnesota have been able to successfully implement their RPS programs, Barbose said, “some of the other states are maybe struggling a little bit.”

There’s a fight over Missouri’s 15 percent by 2021 Renewable Electricity Standard, or RES, which was approved by voters in 2008.

The ballot initiative in Missouri required the drafting of administrative rules following the vote. When those rules were later adopted by the state Legislature, key provisions were eliminated, says Josh Jones, clean energy organizer with Renew Missouri, a nonprofit that helped gather 175,000 signatures for the ballot initiative.

The “deal-breaker” was the removal of geographic sourcing, Jones said. The standard sold to voters would have required power companies to buy renewable energy from in-state facilities, or at least neighboring states that supplied electricity to Missouri.

Jones said a University of Missouri-St. Louis study, done before the vote and the redrafted rules, estimated 9,500 jobs and almost $3 billion in economic development from 3,500 megawatts of in-state or neighboring-state renewable generation.

“The utilities now will be able to fully comply by purchasing the cheapest (Renewable Energy Credits) from anywhere on the open market,” he said.

In Ohio, First Energy Corp. has been chided for failing to meet a solar power benchmarks in 2009 and 2010,  according to The Toledo Blade. At least 0.5 percent of that is supposed to come from in-state solar power, but First Energy has said there aren’t enough solar projects in Ohio to meet the standard.

Michigan has been able to ramp up renewable energy use at a lower cost than conventional coal-fired power.

About 3.6 percent of Michigan’s electricity is produced by renewable sources, according to the latest data from the Michigan Public Service Commission. That’s up from 2.9 percent in 2007. The data show the cost of power from a conventional coal plant is at $133 per megawatt hour, while average costs for renewable energy are coming in at about $102 for wind and $99 for biomass.

Nationwide, there have been mixed results in the costs for renewables, according to Barbose. Some states, like California, have been able to install renewable generation at a lower price than conventional, coal-fired power, he said. In other states, green power is costing more.

But the Renewable Portfolio Standards are still weak in Michigan and Wisconsin, argues Becky Stanfield, senior energy advocate for the Natural Resources Defense Council in Chicago.

“They should follow Minnesota’s and Illinois’ lead,” Stanfield said. “That’s certainly doable given the capacity in the Midwest for wind and other renewables.”

Justin Barnes, a policy analyst at the North Carolina Solar Center, said Midwest utilities haven’t had problems meeting state renewable standards, based on compliance reports. The center runs the DSIRE project, which stands for Database of State Incentives for Renewables and Efficiency.

“Michigan’s (policy) is notable in that it basically applies to every single utility in the state,” he said. “In a lot of states, it may not apply to cooperatives and municipalities.” Conversely, Michigan’s standard doesn’t extend nearly as far as a lot of other states, Barnes added.

Stanfield believes in-state standards and out-of-state purchases will continue to be controversial ways of increasing renewable energy generation in the Midwest.

Just as problematic for the future is the need for new transmission lines in the Midwest to bring wind power to the market, Stanfield said.

“How will consumers across multiple states pay for the transmission? How will we make sure transmission lines are not built through pristine, scenic areas, and how do we compensate farmers and other land owners for use of their land?

“We want to make sure transmission lines aren’t simply getting built to put more coal in the system. How do you enable wind without making coal generation cheaper?

“All those things are going to have to be deal within the next five to 10 years if we’re going to keep on pace to meet these standards.”

Jeff Kart is a freelance environmental writer based in Bay City, Michigan. He spent 16 years in newspapers, most recently as the environmental reporter at The Bay City Times.