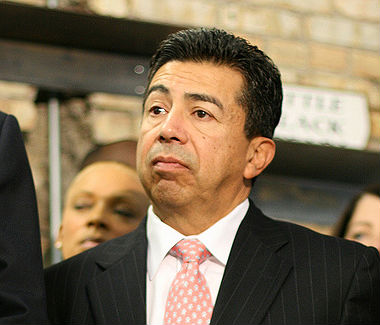 The powerful city councilman who represents the ward where the Fisk Generating Station is located this week for the first time voiced his support for a year-old proposed ordinance that would force the plants to shut down or convert to natural gas.

In the city’s primary election Feb. 22, Danny Solis narrowly failed to get a majority of the vote, so on April 5 he faces a run-off with community activist Cuahutemoc Morfin, an outspoken backer of the proposed Clean Power Ordinance. Many locals and environmental groups say the coal plant was a significant factor in the Feb. 22 election, where Solis and Morfin also faced candidate Ambrosio Medrano Jr., the son of a former city councilman. Solis got 48.9 percent of the vote, Morfin 27.9 percent.

On Monday, the political website Early and Often reported that Solis announced he will re-introduce the ordinance if he is re-elected, a decision he reportedly made after meeting with officials from the Service Employees International Union (SEIU) Illinois Council, whose PAC had sent out glossy, full-color bilingual election mailings depicting the coal plant’s smokestack in ominous sallow tones with the words: “Despite the health problems the plant is causing in our community, Danny Solis won’t stand up to the company causing them.”

The mailing also showed money being stuffed in a pocket and said, “There’s something in the air,” and Solis “has $50,000 in his pocket from the company putting it there.”

The SEIU is now endorsing Solis, and a coalition of national and local environmental and health groups has called off actions targeting Solis in the lead-up to the run-off election, according to Jerry Mead Lucero, a coalition member with the grassroots group Pilsen Environmental Rights and Reform Organization (PERRO).

The SEIU Illinois Council, whose spokesperson declined to comment, had backed Medrano Jr. in the election. Local environmentalists say they see Solis’ announcement as a victory, but they are not convinced he will keep his promise if re-elected.

“It’s about time,” Morfin said. “But his main concern is to get re-elected. Whether he’ll follow through is questionable. I’m not sure it’s a genuine gesture on his part, but the heat is on, and we’ll hold him accountable.”

In recent months local activists and national and local environment and public health groups had blasted Solis for refusing to co-sponsor the ordinance, which would demand cuts in carbon dioxide and particulate matter emissions that could only be achieved by converting the plants to natural gas.

Over the past decade local activists had likewise criticized Solis for not pushing Midwest Generation, a subsidiary of Edison International, to install greater pollution controls on the plants. A week before the election, about 40 people protested outside an upscale fundraiser Solis was holding in a converted industrial building across the street from the coal plant.

Mead Lucero said PERRO will in the next few days demand Solis schedule a committee hearing on the ordinance, before the new city council is seated in May. Ordinance supporters said they were promised an official committee hearing on Feb. 14, but it didn’t happen and instead the ordinance’s sponsor, city councilman Joe Moore, presided over an ad hoc hearing, with no official weight, in the council chambers.

Midwest Generation is currently being sued by the state of Illinois and the U.S. government for alleged violations of the Clean Air Act; and several studies have linked the Chicago plants to significant increases in premature death and respiratory and cardiac problems.

Solis in the past has said he thinks the coal plants are a matter for federal regulators, and that the city would open itself up to legal action if the ordinance were passed.

Midwest Generation officials contend they have reduced emissions significantly in recent years, and last month released a study concluding “impacts of two Chicago power plants on local air quality are a fraction of what has been claimed by those seeking to close them,” according to a company press release, and saying the two plants account for one half of one percent of particulate matter county-wide.

Advocates are hopeful the overall political shift resulting from Chicago’s recent elections will increase the chances of the ordinance passing. Mayor Richard M. Daley, who is known worldwide as a “green mayor” but declined to take a position on the coal plants, announced last fall he would not run for re-election.

Mayor-elect Rahm Emanuel was the only candidate in the February election who did not explicitly back the Clean Power Ordinance; but he said in response to a questionnaire that “Midwest Generation must clean up these two plants, either by installing the necessary infrastructure to dramatically reduce the pollution they emit, or by converting to natural gas or another clean fuel. I will work closely with State and Federal regulators and the City Council to make sure it happens.”

Emanuel’s office did not respond to requests for comment.

Moore said he’s hopeful that with Solis’ support the ordinance might actually pass during this city council (before the new one takes over in May.) The energy and environment committee is meeting April 13, and Moore said they could have a hearing on the ordinance then — a needed step to a full vote.

“I was gratified to see Alderman Solis finally jumped on board,” Moore said. “It’s good for his community and obviously good for his political career. It’s one of those times where doing the right thing is also good politically.”

Morfin, 39, who grew up in the neighborhood and formerly owned a gym, said he continues to make it one of his major campaign platforms while door-knocking, though he finds many residents are still unaware of the plant’s effects.

“A lot of people don’t know the statistics, the harm it causes,” he said. “Like when I was a kid, you think it’s just a big chimney blowing smoke. It has to be a top priority for the health of this neighborhood.”