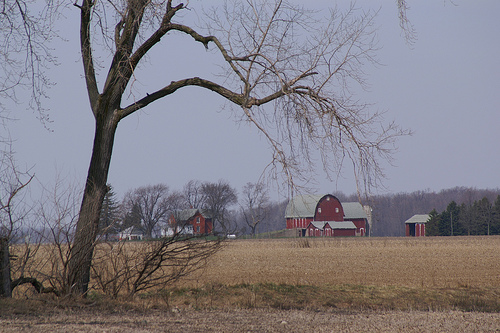 More than 92 percent of the land in Gratiot County, Michigan is zoned agricultural. (Photo by Julie Falk via Creative Commons)

While many communities are imposing moratoria on commercial wind farms, one mid-Michigan county is putting out the welcome mat to not one but potentially three major wind developments.

The first wind farm, a $440 million project with more than 125 turbines, will be up and spinning in Gratiot County by the end of 2011. Close on its heels are two more projects that are in different stages of development and could bring several hundred additional turbines within the next few years.

Gratiot County is a bucolic rural setting where farming is the primary occupation and barns and silos dot the flat landscape for miles. And for the most part, these farmers are welcoming the wind development as a means of income, a way to sustain family farms and as a boon to both the local economic and natural environments.

The first stage of the project will provide 150 skilled construction jobs, 15 full-time technician jobs, and $1.2 million in annual revenue for the county and municipalities. Landowners will get $80 per acre for leasing space for a turbine and a percentage of gross royalties. The project is expected to generate enough electricity to power 54,000 homes annually.

An energy legacy lives on

Somewhat ironically, the oil industry of the past had a hand in making the county desirable to renewable energy developers today. Because a now-closed refinery in Gratiot County was once Consumers Energy’s seventh largest customer, the electric grid capacity is already in place, although now power will be moving in the opposite direction.

But what sets Gratiot apart from other potential wind farm sites is how county officials and residents proactively went about understanding how the project will impact them.

From the beginning, says Donald Schurr, president of the local economic development organization, the goal was to educate and get everyone up to speed on all aspects of a potential wind farm, “good, bad or indifferent.”

“I went to Michigan State University to gather information and I was also familiar with turbines because I grew up in California,” Schurr said. “But when I investigated it here, I realized planning and accommodating a viable wind farm required we do things differently. At our first meeting of officials and landowners we had speakers come in to teach us what we needed to know.”

Schurr said he also visited wind farms elsewhere in Michigan as well as in the Baltic region of Germany.

“We have a sister city in Germany, so we went up to the Baltic and talked to people on farms (with turbines),” he said. “I asked one woman if she experienced problems with shadow flicker and she said, ‘Once in a while.’ So I asked her what she did about it and she said, ‘I closed the blinds.’”

County residents were also offered the opportunity to experience wind turbines up close. One such trip, to Indiana, was organized by MSU’s local extension director, Dan Rossman.

“We all got off the bus and were able to walk right up to the turbines,” Rossman said. “Everyone’s fears totally subsided and they were able to make an informed judgment for themselves.”

After months of educating and sharing experiences, another public meeting drew more than 300 people, but only three negative comments.

“The angriest calls I get now are from people who want to know why they can’t have a turbine on their property,” Schurr said.

As stakeholders began to understand the possibilities and the benefits, they also realized the need for comprehensive wind siting regulations.

At that time, Schurr was developing a master plan for two cities and one township. With interest in the potential project growing, others signed on, creating a seamless plan for the entire county except one southern township — likely the first of its kind in the state.

The county’s wind energy ordinance was written to cover the same area with one set of rules and regulations, relieving wind farm developers of the need to address a patchwork quilt of ordinances across the county. Without this cooperative ordinance, the first wind farm, involving 30,000 acres in four townships and 240 landowners, might not be on the horizon at all.

Throughout the process, he said developers spoke with and listened to a broad range of people from Future Farmers of America to educators, local, state and federal officials, MSU Cooperative Extension, and the Michigan Farm Bureau.

“In a county where 92.5 percent of the land is zoned agricultural and there are only 42,000 people, we wanted to appreciate the culture and the community values,” he said. “In the end we are helping move the county forward in a progressive way to keep family farms in families.”

“We know that you don’t just get consensus, you have to earn it,” he added.

Rossman, with the county extension office, said there has been no organized resistance to the project.

“Even in the beginning we did not experience serious opposition. People had the typical questions and when their questions were answered, their fears just evaporated,” he said. “They were very open-minded.”

“No one has called my office to complain,” Rossman said. “There are people who chose not to have a turbine on their farm, but they did it because they didn’t need the financial help or didn’t want to lose acreage or deal with the construction or have their view changed.”

Vander Veen said that when it came to the “kitchen table” lease discussions with individual landowners, negativity was often related to the past poor practices of the oil and gas industry, not the wind farm.

“It almost always wasn’t about the turbines but rather it was about past oil and gas leases gone bad,” he said. “Situations where companies came in, tore up the property and left a mess behind.”

One landowner who will have a turbine on her 40-acre family farm is Gratiot County Treasurer Mary Sullivan. She said she is confident the wind farm will be an asset, not a liability.

“We have a cottage near McBain, Michigan, where there are turbines. We took the time to visit one and we listened and we simply didn’t hear anything but a swoosh sound.”

“I have no misgivings, none whatsoever,” she said. “We absolutely have to get away from non-renewable energy. But this is something I never thought I would see in my lifetime.”