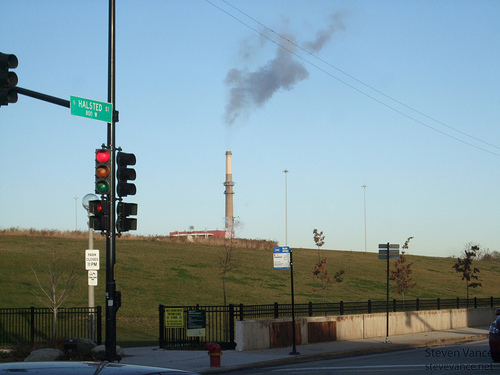 The Fisk Generating Station in Chicago could close if a new city ordinance is approved. (Photo by Steven Vance via Creative Commons)

CHICAGO — A long-stalled Chicago ordinance that could force the city’s two aging coal-burning power plants to greatly reduce emissions or shut down now has enough backing to pass at the city council’s next meeting. But proponents aren’t declaring victory yet.

The ordinance must first pass a joint committee hearing Thursday. And if the full city council does vote it into law when it meets May 4, it would likely face a legal challenge which even its most important council backer says could render it “largely symbolic.”

It also remains to be seen whether the ordinance will force the plants to close down, convert to burning natural gas, or if negotiations will set aside climate provisions and allow Midwest Generation, which operates the plants, to comply by installing modern pollution control equipment.

Environmental and public health groups are calling on outgoing Mayor Richard M. Daley to shepherd the ordinance through before he leaves office May 5. But if it doesn’t pass this time, they say they are still hopeful it will be passed by the new city council and Mayor-elect Rahm Emanuel.

A legacy of pollution

Local activists, national environmental groups and some city council members have for more than a decade been demanding Midwest Generation reduce emissions from the Fisk and Crawford power plants, which were built in 1903 and 1924 respectively, and are exempt from the strictest provisions of the Clean Air Act. A city ordinance mandating extreme cuts in sulfur dioxide and nitrogen oxide emissions was introduced in 2001, but never made it out of committee.

In April 2010, city councilman Joe Moore introduced the current proposal – the Chicago Clean Power ordinance — mandating the coal plants reduce particulate matter and carbon dioxide emissions. The particulate matter reductions could likely be achieved by installing modern pollution control equipment. But slashing carbon dioxide emissions would likely only be possible by burning natural gas instead of coal, since there are no commercial-scale carbon sequestration options available.

Midwest Generation officials have said converting to natural gas would not be economically feasible, and that closing the plants will put 200 people out of work.

Black stain for a ‘green’ mayor

Many activists say the mayor’s lack of support is to blame for the failure of either ordinance to so far reach a full vote.

The plants have become an increasingly prominent stain on Daley’s reputation as an internationally known “Green Mayor,” since national environmental groups have made the plants centerpieces of their clean energy campaigns.

Mayor Daley’s office did not respond to interview requests. Incoming Mayor Emanuel said in response to a pre-election questionnaire that he wants the coal plants to reduce pollution, though he declined to specifically support the ordinance.

The coal plants were a key factor in city council elections held in February and April. Incumbent city councilman Danny Solis, who represents the Pilsen neighborhood where the Fisk Generating Station is located, had until recently declined to support the ordinance, but changed his position after facing a run-off with neighborhood activist Cuauhtemoc Morfin, an outspoken critic of the coal plants.

Solis, who ultimately won the run-off election, said some long-time supporters told him they didn’t vote for him in February because of the coal plants.

Now, 26 out of the city’s 50 council members have signed on as ordinance co-sponsors, and the committees meeting April 21 also include a majority of supporters. But the ordinance still could fail to move to a full council vote, if more time is needed for testimony, the committees don’t draw a quorum or members don’t vote as expected.

“Nothing’s a certainty in this world, particularly with the Chicago City Council,” said Moore, who introduced the ordinance after visiting coal strip mines in Appalachia. “If it doesn’t pass this time, we’ll definitely come back in the new council. But every day we waste is another day that tons of pollutants are spewed into the air and the health of city residents is threatened.”

Moore, Solis and some members of the coalition backing the ordinance said they would consider renegotiating the carbon dioxide component of the ordinance – possibly by allowing the purchase of emissions offsets — if that’s what it takes to enforce the provisions dealing with immediate threats to public health. Several studies have linked particulate matter and other emissions from the two plants to premature deaths, heart attacks and asthma attacks among local residents.

Howard Learner, executive director of the Environmental Law and Policy Center, said the particulate matter reductions are “the bread and butter of this ordinance.” Learner’s group did a study finding the two coal plants cause $127 million per year in public health costs.

“If this ordinance gets out of committee, I think we’ll see some serious negotiations with Midwest Generation related to the public health impacts,” Learner said, “and later we can have conversations about the different ways to comply with the carbon dioxide requirements.”

Other activists have demanded the ordinance be voted upon in its current form, with carbon dioxide limits intact.

“We want to see it pass as is – both the particulate matter and the carbon dioxide components are extremely important,” said Edyta Sitko, a Greenpeace regional field organizer. “Greenpeace’s stance has always been that these plants are just not necessary for Chicago in the first place.”

A spokesman for Midwest Generation said even a compromise approach “would simply burden our plants with a unique cost disadvantage that would make them uncompetitive and still risk their closure.”

Midwest Generation officials have said if the ordinance passes, they will take legal action challenging the city’s right to regulate the coal plants. The Environmental Law and Policy Center has said Illinois’ constitutional Home Rule provision gives the city government the power to enforce the ordinance.

Solis had previously cited legal concerns in explaining his refusal to back the ordinance.

“Our corporation counsel didn’t believe it would hold up in court,” he said. “That might still be an issue. There could be litigation and then the courts will have to decide. The ordinance might be more symbolic than anything else.”

Chicago doesn’t actually need the electricity from the plants, though if the plants go offline before ongoing upgrades to local transmission infrastructure are completed it could cause instability on the grid including possible blackouts, according to a spokesman for the utility ComEd.

‘The furthest we’ve ever come’

The Chicago plants, and another nearby one on the shore of Lake Michigan just across the Indiana state line, are among a number of aging coal-fired power plants in cities nationwide that advocates say cause an inordinate health risk, since they are in densely populated areas and don’t have to meet the same pollution control requirements as newer plants.

But critics say Midwest Generation’s improvements have not been stringent or quick enough. In 2009 the Department of Justice and the state of Illinois sued the company, alleging these and its four other Illinois plants had violated the Clean Air Act.

Members of PERRO, the Pilsen Environmental Rights and Reform Organization, said they are optimistic the ordinance will pass in coming months, though they are concerned it may be watered down in the process.

“Any concession now to the interest of the coal plant and coal plant shareholders is simply putting money in the form of increased profits and decreased expenses ahead of the lives and health of local residents,” said PERRO co-founder Dorian Breuer. “Keeping the ordinance as-is is critical to us, anything else would devalue the whole effort.”

“We feel very confident it is going to pass,” Breuer added. “This is the furthest we’ve ever come, we’re in an excellent position.”

EDITOR’S NOTE: An earlier version of this story included a quote that misstated the scope of the ordinance.