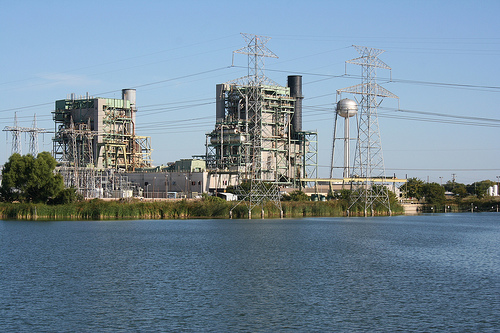 Older power plants often draw cooling water from reservoirs and discharge it back into the lake, killing billions of fish in the process.

The Environmental Protection Agency is proposing new steps to reduce the number of fish killed by power plant cooling systems, but critics say the plan, which relies on state-level enforcement, will be ineffective.

Every year billions of fish are killed by coal-fired and nuclear power plants across the Midwest. As these plants suck in water from lakes and rivers, adult fish perish pressed against the intake screens, while juvenile fish, larva and eggs are sucked right into the system.

Many of these systems also expel water at up to 30 degrees warmer than it was taken in, which contributes to blooms of toxic and oxygen-depleting algae that can kill fish and foul water.

On April 20, the EPA proposed a new rule meant to reduce the number of fish killed by older power plants with open cooling systems (as opposed to the closed cooling systems that reuse the same water and have been the industry standard for new plants for several decades).

Critics say the proposed rule does little to change the status quo, since it largely delegates authority to resource-strapped state agencies to come up with specific requirements for individual plants and to enforce those requirements.

Natural Resources Defense Council attorney Thom Cmar called the rule “a big punt by the EPA to the states,” opening the door for a loose patchwork of approaches rather than stricter, streamlined requirements.

The proposed rule, open for public comment until July 19, changes the way section 316b of the Clean Water Act is implemented. It applies to any plants that take in more than 2 million gallons of water per day and uses at least a quarter of it for cooling. Paper mills, textile mills, metal manufacturers and other industries fall in this category, but power plants are by far the largest such water users.

Half of all the water withdrawn each day in the U.S. – about 200 billion gallons – is for cooling power plants, according to the U.S. Geological Survey.

Environmental groups have long pressed for stricter standards, with many advocating that all plants be required to convert to closed-cycle cooling systems. The new rule was sparked in part by a lawsuit filed by the New York organization Riverkeeper and the NRDC.

The rule deals with impingement, or fish caught against intake screens and structures; and entrainment, or fish sucked into the cooling system. A separate part of the Clean Water Act (section 316a) regulates the temperature of water released from power plants.

For entrainment, the proposed rule basically leaves it up to most state governments to decide what regulations, if any, to impose. The rule lays out standards for determining best technology available to reduce entrainment as part of the state permitting process.

Regarding impingement, the proposed rule says plants can either reduce the speed of the water being sucked into their system, or they must prove that no more than 12 percent, annually, of fish that are impinged on intake structures die. If power plants reduce the water speed, they don’t have to meet any numerical fish mortality limits, since it is assumed fish will then be able to swim away.

Cmar and other advocates are skeptical the rule will result in meaningful changes.

“Experience has shown that the Midwestern states lack both the political will and the expertise to evaluate the engineering details of a plant’s cooling water intake and require changes that will minimize their environmental impact – even though that’s what the Clean Water Act requires,” Cmar said. “And the EPA has failed to step in and enforce the Clean Water Act in the states’ absence. It’s taken decades of litigation by environmental groups just to get the EPA to make the woefully inadequate proposal that’s currently on the table.”

“If you have one state doing one thing, it lowers the bar,” he said. “Most of the time what you end up getting is, ‘We’re not going to do any more than what anyone else is going to do.’”

Technology options described in the rule include fabric walls or nets blocking off the water intake area, and structures to divert fish. The EPA says the best technology may be screens outfitted with hoses that spray fish into buckets to return them to the water unharmed. Cmar called it a “Rube Goldberg-esque contraption developed so companies can continue to make this massive, massive withdrawal of water.”

The EPA estimates the proposed rule will prevent the deaths of 615 million fish (or their ecological equivalent) each year. Two other options the EPA considered would have saved about three times as many fish, but were not deemed economically or practically viable.

A controversial U.S. Supreme Court ruling found that a cost-benefit analysis can be considered in deciding how to implement 316b, meaning that the technology that saves the most fish won’t necessarily be mandated, but rather the one that saves fish the most “efficiently” considering costs.

Cmar said this is problematic since such analyses might not adequately account for the cumulative economic value of smaller “forage” fish and other organisms that aren’t prized by anglers but are key to the food chain.

“How do you capture all the benefits of not killing massive numbers of those fish that are supporting more valuable fish?” asked Cmar.

The NRDC studied the effects of the cooling system at FirstEnergy’s Bay Shore coal-fired power on Lake Erie’s Maumee Bay near Toledo. The NRDC dubbed the plant the “bass-o-matic” for the high number of fish killed: about 50 million adult fish through impingement, and almost 14 million juvenile fish, two billion larval fish and 200 million fish eggs sucked into the system.

The Ohio EPA has ordered the Bayshore plant to reduce the number of fish killed, though the NRDC and other critics said its requirements still aren’t strict enough. The plant is located in one of the Great Lakes most fertile spawning areas, and the NRDC estimated the economic impact of the Bay Shore plant’s cooling system on fisheries at $30 million a year.

Are cooling towers the best option?

New plants are already required to have a closed cooling system, which usually entails a cooling tower. Environmental groups including the NRDC, the Sierra Club and Riverkeeper want the EPA to impose strict limits on the number of fish impinged and entrained at existing plants, limits that might only be obtainable by converting to a closed cooling system.

In the proposed rule, the EPA says it decided not to require closed cooling systems because they would not be feasible at all locations. Some plants lack space to build a cooling tower, the EPA said, and running a closed cooling system requires burning more fuel which increases air emissions and could violate a facility’s air permit. It might not make financial sense to invest in new cooling towers at older plants, the EPA added, and the requirement might affect the reliability of local power supplies.

“The fact that we have built new facilities with closed-cycle cooling may be true, but what doesn’t transpose is that therefore…we can do it at all other existing facilities,” said Rich McMahon of Edison Electric Institute. He said the monitoring requirements in the rule are “excessive,” especially measuring the mortality rates of fish caught on screens.

“There’s a difference between monitoring a pollutant that’s coming out of a facility and trying to accurately and precisely monitor the interaction between living critters and an intake structure,” McMahon said. “The facilities covered by this aren’t in the business of raising and tending fish. But here they are supposed to capture the ones impinged, babysit them for two days, and see how many survive.”