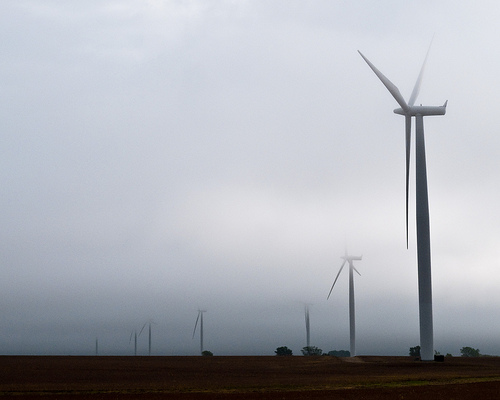 Photo by ninjawil via Creative Commons.

When Minnesota passed one of the nation’s most aggressive renewable portfolio standards in 2007, Minnkota Power wasted no time in ramping up its wind capacity. Believing the cost of wind power would go up, the Grand Forks, N.D., generation and transmission co-op locked in long-term contracts to cover its needs for the next 25 years.

Then the economy went south, dragging electricity demand and wholesale prices down with it. Minnkota, along with the 11 rural electric distributors it serves in North Dakota and northwestern Minnesota, suddenly found itself stuck with more wind power than it needed. It’s been selling the excess at a loss ever since, making up the difference with a half-cent per kilowatt-hour surcharge on its customers.

The fees have helped fuel the perception, particularly among rural electric co-ops, that Minnesota’s renewable energy policy is driving up the price of electricity. Others, though, including state energy officials, point to the utility’s unusually large and early hedge on wind prices as a primary cause of its recent losses.

The Minnkota case illustrates just how complicated it can be to calculate the impact of state renewable mandates on electricity rates. Variables such as fuel prices, wholesale rates and energy demand are in constant flux, and decisions about what and when to buy can affect the return on capital investments.

With many states’ renewable targets ramping up right as their economies struggle to rebound from the recession, politicians are scrutinizing the costs of renewable policies and requesting information about how they affect electricity rates.

They’re not likely to find a simple answer.

However, the most comprehensive studies to date and the experience of utilities so far suggest that, by and large, renewable portfolio standards haven’t had a significant impact on customers’ bills. Still, there’s room for more study, and in some states, including Minnesota, there remains relatively little data about the ratepayer impact of renewable policies.

The Minnesota Chamber of Commerce has been pushing for legislation that would require utilities to include data in their biennial resource plans about costs incurred from complying with the state’s renewable standard, which calls for 25 percent of electricity to come from renewable sources by 2025.

The legislation appears likely to pass with little opposition because both supporters and critics of the state’s renewable policy believe a study of costs will result in evidence that supports their position. The Chamber says it is neutral on the issue.

“We get folks who call us and say: hey, my utility rate is going up. How much of this is [because of] the renewable energy standard?” said Bride Seifert, the chamber’s energy policy manager. “We’d like to know the answer, because there’s 20 studies on each side of the table.”

One of the larger reviews of renewable portfolio standards was a 2008 report (PDF) from the Lawrence Berkeley National Laboratory. The study looked at data on a dozen state renewable policies enacted before 2007. The estimated impact on electricity rates varied by state, but it was a fraction of a percent in most cases and just over 1 percent in two states, Connecticut and Massachusetts. “There is little evidence of a sizable impact on average retail electricity rates so far,” the report concluded.

One of the report’s co-authors, Galen Barbose, said in an interview that they are collecting data for an updated version of the report. So far he said he hasn’t seen any new information to suggest their conclusion about rate impacts will change significantly in the next edition.

A 2009 study by the U.S. Energy Information Administration modeled the potential impact of a 25 percent nationwide renewable electricity standard. It, too, noted that rate impacts would vary by state, with renewable-rich regions like the Great Plains and Northwest meeting the targets more easily. Overall, though, it projected no impact on rates through 2020, followed by a less than 3 percent increase by 2025. By 2030, however, it projected little difference in rates with or without a national renewable mandate.

The Minnesota Free Market Institute and American Tradition Institute reached a very different conclusion in an April 2011 report (PDF), which claims Minnesota’s renewable electricity standard is going to cause rates in the state to skyrocket by as much as 37 percent by 2025.

Xcel Energy, the state’s largest utility, has come up with a much smaller number: $0.003. That’s the difference Xcel forecasts between its projected per-kilowatt-hour energy price in 2025 under its proposed wind expansion plan compared to a hypothetical scenario in which it stopped adding new wind capacity after 2012.

Asked to comment on the Free Market Institute’s study, Xcel Energy spokesman Steve Roalstad said, “It doesn’t seem to be moving in that direction.” The cost of adding renewable energy sources, especially wind, continues to fall and has become very competitive with traditional generating sources, he said.

The utility already files information about the impact of renewables on its rates as part of its regular resource planning documents. Roalstad said the company would be happy to provide any additional information to comply with the Chamber’s proposed legislation. But the ratepayer impact so far, he said, is insignificant.

Otter Tail Power, which serves about 130,000 customers in the Dakotas and western Minnesota, has had a similar experience. Todd Wahlund, Otter Tail’s vice president for renewable energy development, said the company would have added wind capacity regardless of Minnesota’s renewable standard. That’s because it’s been the most economical option.

Duluth-based Minnesota Power was among the first utilities to cite complying with the state’s renewable standard as a factor in a rate increase case with state utility regulators. Spokeswoman Amy Rutledge said, however, that renewables accounted for only a small portion of the increase.

“Our rate increases have been largely the result of large environmental retrofit projects to reduce emissions at our largest generating facilities,” Rutledge said.

Xcel says adding renewable energy sources to its system has reduced its environmental regulatory risk, and that diversifying its power sources is a good way to protect customers against rate increases in the event that natural gas prices go up again. “Wind power can be a very effective hedge against the volatile nature of natural gas prices, even taking into account wind’s intermittent nature,” Roalstad said.

Warren Leon, project director for States Advancing RPS, an association for state policy people who work on renewable mandates, says the cost of complying with them should be fairly straightforward for utilities to calculate. But states should also be asking: “Are there benefits to the thing produced that also deserve to be studied, even though they are harder to pin down?”

Supporters say there are environmental and job-creation benefits (which, as the legislation is currently written, wouldn’t be a part of the reporting process proposed by the Minnesota Chamber.) But there are also benefits that specifically relate to keeping down electricity rates, Leon said.

Minnesota State Rep. Bill Hilty, one of the architects of Minnesota’s renewable policy, said some critics have exaggerated the financial impact by attributing the full cost of transmission upgrades as a cost of wind power. In reality, he said, many of those upgrades would have needed to happen anyway, and distributing more renewable power across the grid reduces the need for even greater upgrades.

A bet on wind

That doesn’t mean utilities haven’t encountered costs in trying to achieve those longer-term benefits. In a brief written statement, Great River Energy blamed its wind energy purchases for increasing retail customer bills by about 1.6 percent, or about $18 per year for an average homeowner. The generation and transmission co-op serves about 645,000 customers in Minnesota and Wisconsin.

Minnkota Power’s predicament stems from locking in big, long-term wind contracts immediately following the passage of the Minnesota renewable legislation, which required utilities to generate 7 percent of electricity from renewables in 2010. By 2012, they’re expected to be at 12 percent, and it gradually ramps up to 25 percent in 2025.

Minnkota Power has sailed past all of those milestones already. By 2009 it had signed contracts for 357 megawatts of wind power from two North Dakota wind farms. Today it’s already generating more than 30 percent of its electricity from renewable sources.

The company made a bet that wind contracts would cost more in the future. That might still end up being the case, but for now Minnkota is paying a premium it can’t recoup through sales. The cost of new wind generation has continued to go down. The real hurt has been the decline in electricity demand and wholesale electricity prices due to the recession. Minnkota is now selling its wind power for 2 cents less per kwh than it’s paying for it, and it’s assessed the loss to customers in the form of a surcharge.

A December report from the Minnesota Office of Energy Security said Minnkota’s “dilemma” should serve as a caution about the risks of overbuilding renewable capacity. “It remains to be seen how Minnkota’s customer-owners ultimately will be affected,” the report notes.

“In the long run, we think it’s going to pay off,” said Fee.