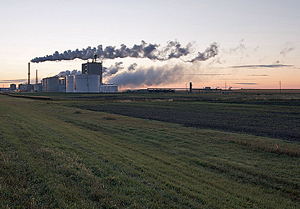 An ethanol plant near Winthrop, Minnesota.

SIOUX FALLS, South Dakota — Jeff Broin, the chief executive of ethanol production giant Poet LLC, says that if one looks out 20 years and envisions a U.S. market permeated with ethanol-blended fuel products, the country’s dependence on imported oil “could easily go away.”

And while the ethanol industry is moving toward a position that seems to accept an inevitable end to direct tax credits, government support in other forms, Broin and others say, remains necessary to foster that vision of the future.

Broin spoke June 1 to an audience of business leaders at Augustana College in Sioux Falls. Fielding questions afterward, Broin focused the bulk of his attention on what he views as excessive regulation and layers of government bureaucracy that stunt the advancement of new products and technologies.

“We change too slow in this country,” he said. “The government stands in the way of everything.”

Yet Broin, whose company is a leading lobbying force for the ethanol industry, is simultaneously “working” presidential candidates, as he put it, to ensure they recognize the importance of the industry and the need for government to provide continued financial support.

A key test of that support will take place in the U.S. Senate today. A vote is scheduled on an amendment by Sen. Tom Coburn of Oklahoma, added to an economic development bill, which would end a special 45-cent credit for every gallon of ethanol blended into fuel at the pumps. The tax credit costs about $6 billion annually and is set to expire this year if Congress does not extend it. (Update: The Coburn amendment was defeated 40-59, but similar proposals will be voted on next week.)

Speaking to the Des Moines Register, a spokesman for Poet-backed Growth Energy called Coburn’s amendment “an American job killer” that “allows foreign strongmen to exert their control over the U.S. economy.”

Iowa Sen. Chuck Grassley, an ethanol proponent, has introduced a bill that would steadily trim the current 45-cents-a-gallon credit to 20 cents in 2012 and to 15 cents the following year. From 2014 through 2016, the credit would top out at 30 cents if the price of oil were no more than $50 a barrel; if more, the subsidy would fall.

Broin has said that the industry might support lifting the credit in exchange for government investments in infrastructure – including incentives for flex-fuel vehicles and more blender pumps at gas stations, which could dispense far more ethanol than the 10 percent that is now used.

If such rules were changed in the industry’s favor – and if taxpayers front the money necessary to deliver more ethanol to the masses – the road to a better energy future would get paved, he argues. Broin said would-be Republican candidates for the White House, including former Minnesota Gov. Tim Pawlenty, are “pretty excited” about ethanol’s ongoing role. But he stopped short of characterizing their policy stances, and perhaps for good reason.

For all of ethanol’s purported values, the pool of its critics continues to deepen. Despite its long run, it has yet to do much to contain fuel costs, and in the meantime, while creating jobs and benefiting farmers with higher corn prices, it has driven up other costs, which have been passed along to consumers, analyst Darin Newsom of Telvent DTN notes.

For example, according to the U.S. Department of Agriculture, in part because of high costs of corn used to feed livestock, ground beef prices were up about 20 percent in April of this year when compared with the same month in 2009.

It is also not clear whether there is enough corn to support significantly greater ethanol production. The ethanol industry uses about 40 percent of the nation’s corn crop, according to the USDA, but produces less than 10 percent of the fuel supply.

What’s more, critics say, growing corn en masse and distilling it for ethanol in itself is a process that consumes vast amounts of energy and stresses land and water supplies.

Broin, for one, dismisses the criticism. “There’s been such a smear campaign out there to mislead people about our industry,” he said at Augustana.

Broin champions a transition from corn to cellulosic ethanol, which can be made from non-food crops like switchgrass, as the next generation product for the industry. But it remains in its early stages, and it is not clear if there is enough material to supply a robust cellulosic biofuel market without creating environmental trouble. Moreover, innovation on that front, as Broin has previously acknowledged, depends in part on government support.

In the coming months, politicians, most notably presidential hopefuls, will be pressed to take sides. But that will put many, particularly those from farm states that have benefited economically from ethanol production, in a tough spot as they balance the nation’s long-running need for more energy independence with a growing political imperative to scale back government spending.

Pawlenty, for one, appears ready to wind down the government’s backing of ethanol.

Photo by snoman_mn via Creative Commons