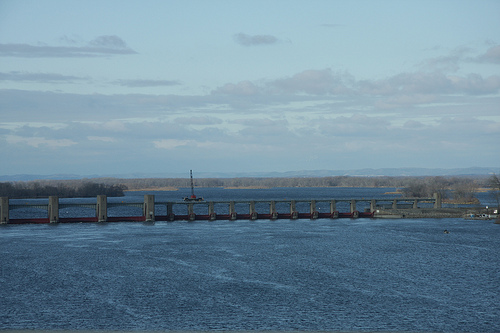 Mississippi River Lock and Dam #7 north of LaCrosse, Wisconsin, is one of the sites targeted for hydropower. (Photo by Andrew Pritchard via Creative Commons)

One of the nation’s untapped reservoirs of energy may turn out to be the Mississippi River.

Energy developers have filed 19 “pre-application” documents proposing hydro projects on locks and dams on the northern Mississippi — from Hastings, Minnesota to Cairo, Illinois — with the Federal Energy Regulatory Commission (FERC).

Proposals also have been developed for conventional hydropower on rivers with locks and dams in Wisconsin, Indiana, Ohio and Iowa, as well as in other parts of the country.

In addition, more than 74 pre-application proposals have been filed for hydrokinetic energy projects in the southern Mississippi, which call for underwater turbines to be secured with pilings attached to the river’s floor. The southern section is more suited to hydrokinetic due to the depth of the water, the swiftness of currents and the lack of dams.

The proposals represent a larger effort by energy developers to seize the opportunity to use hydro in all its forms, from tidal power on coastal rivers to wave energy in the sea, to provide a new source of clean power. Energy Secretary Steven Chu has suggested hydropower could add 70,000 megawatts (MW) to the grid, the equivalent of 70 nuclear power plants, by using improved turbines at current dams and adding capacity to those which produce no energy.

In the northern states, two small energy development companies — Boston-based Free Flow Power, Inc. and Houston-based Hydro Green Energy LLC — have submitted all the applications to produce hydropower on the U.S. Army Corps of Engineers’ lock and dam system. Formed within the last five years, both companies have plans in other states as well.

Only around 2,000 of the nation’s 79,000 dams are equipped with generators, leaving a great deal of potential on the table, say hydropower advocates. Most of the locks and dams offer “low head” hydropower where the differential between the height of river before and after the dam is 30 feet or less. They are sometimes called “run of the river” power plants because they do not stop flows or create pooling upstream.

In the past, exploiting the energy potential of small dams was not thought possible or worth the trouble of dealing with FERC. However, affordable technology, a simpler approach to licensing small hydropower projects and the availability of tax credits have all helped bolster the industry.

The lock and dam projects on the Mississippi would generate 321 MW of electricity, more than double the amount the river’s 20 hydroelectric plants currently generate, according to Rupak Thapaliya, national coordinator for the Hydropower Reform Coalition in Washington, D.C., an organization that lobbies for the removal of dams that have proven detrimental to the environment.

Much larger is the downriver activity where hydrokinetic developers, including FFP, want to add 6,000 MW, Thapaliya said.

While those numbers may seem impressive, they’re quite small compared to the output of dams in the Pacific Northwest, which provide the majority of that region’s electricity. Washington state’s Grand Coulee Dam, for instance, produces 6,800 MW, more than all the proposed projects on the Mississippi combined.

And while the projects, if built, would roughly double the hydropower output of the nine states along the Mississippi they would still only amount to slightly more than 6 percent of region’s energy capacity, Thapaliya said.

“If every single project was built entirely the total contribution to the energy portfolio would not be very great,” he noted. “That tells us we need to diversity our energy sources. Hydro alone is not going to meet our energy challenges.”

Still, he’s not opposed to lock and dam projects, calling them “less controversial” and “relatively benign.” His major concern is water quality and the other potential impact from hydrokinetic plants.

“The river is always heavily stressed by other human uses and because these projects are so widely dispersed over such a large stretch of river, the need to proceed carefully is especially important,” he said.

Why hydro, why now?

Mark Stover, corporate vice president of Hydro Green, added, “you can tell by the amount of activity that the Mississippi has great hydro and times have changed enough, and there’s been enough technological innovation, that people feel confident they can develop these projects in an economic fashion.”

Stover’s pretty familiar with the tax breaks for hydro and streamlining of FERC permit processing that passed in 2005. He helped write that legislation as the then Washington lobbyist for the National Hydropower Association.

FERC’s quicker process for dam projects and hydrokinetic has boosted applications, said Celeste Miller, spokeswoman for the agency. In testimony before Congress in 2010, FERC’s office of energy projects director, Jeff Wright, said the agency “has seen increased interest in small hydropower in recent years,” granting 50 permits in 2009, up from 15 just two years earlier.

And if tax breaks and simpler permitting isn’t enough, perhaps renewable energy mandates are. Hydro from dams producing 100 kilowatts or less count toward quotas in Minnesota, Wisconsin and Iowa, making power produced from them an attractive option for utilities looking for green energy.

FERC gives hydro developers 36 months to file all the materials necessary for a license. Nearly every state and government agency with oversight duties on rivers, from fish and game departments to the Environmental Protection Agency, will have input into the FERC applications being submitted by both companies.

FERC’s Miller said companies holding hydropower licenses will sometimes sell them to other developers, as happened when a license holder for a LaCrosse, Wisconsin, lock and dam merged with a competitor. And a company holding the FERC license for a potential plant on the Lower St. Anthony Falls near downtown Minneapolis sold it to Brookfield Power.

That doesn’t appear to be a strategy, however, of either Hydro Green or FFP, who have hired staff with strong backgrounds in hydroelectricity and knowledge of both the river and federal government policy. FFP has filed nine lock and dam pre-applications with FERC for projects on the upper Mississippi, while Hydro Green has 10 in the works.

Initially, Hydro Green was aggressively pursuing hydrokinetic energy, building the nation’s first hydrokinetic power facility at Lock and Dam No. 2 in Hastings, Minnesota. Stover said the experimental project served the company well as a test site where it could tweak the company’s turbine design and conduct a $500,000 study of its impact on fish.

Less than one percent of the fish who entered the plant died, said Stover, but he saw a greater problem in power production: the facility didn’t produce enough energy.

“We realized as we ventured into the hydrokinetic space that the industry is many years off,” he said. “It is inherently a low-power technology that was costlier than we would have liked at the time.”

Instead, Stover and Hydro Green embarked upon a plan to install its own turbines on locks and dams in the Mississippi and several other rivers. “We went back to the well, so to speak, with the Hastings model and poured that into the low-head technology,” Stover said.

For its part, FFP plans to use turbines built by other companies for the lock and dam projects while using its own airplane-engine style hydrokinetic models for downriver sites, Guidroz said.

Both companies have raised capital within the past year to begin potentially building projects if they receive FERC approvals. Hydro Green, which has a total of 34 low head dam projects in the pipeline totaling 1,000 MW, raised $5.5 million in corporate financing. FFP brought in $5.7 million this year from investors.

Despite the interest, there are plenty of challenges for energy developers. Nanette M. Bischoff, FERC coordinator at the St. Paul District U.S. Army Corps of Engineers, said a recent proposal at Lock and Dam 7 at La Crescent, Minnesota, which involved Hydro Green was withdrawn.

“It’s usually an economic decision, there’s not enough power there to invest the time and money,” she said.

If money is an issue on the upper Mississippi, the river itself may be the deciding factor further south. Fotis Sotiropoulos, director of the University of Minnesota’s St. Anthony Falls Laboratory, said little is known how the hydrokinetic turbines at the river’s bottom will react to rocks, sediment, sticks, debris, aquatic life and flooding, all common on the Mississippi.

Still, even Thapaliya believes further hydro could play a role in creating power in the future. Since the best sites for hydro in the country have been taken, what’s left are hydrokinetic and lock and dam projects.

“The recent talk about existing dams and hydrokinetic is because of that,” he said, “and I do think responsible hydro development should be a part of an energy solution.”