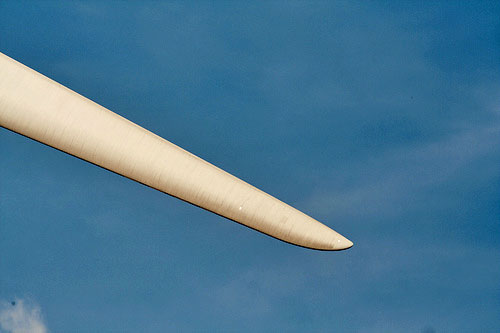 Two fronts have collided before Minnesota utility regulators, and now, observers on both sides are waiting to see which way the wind will blow in what’s been the state’s highest-profile and hardest-fought battle over wind turbine placement.

The proposed $179 million, 78-megawatt Goodhue Wind project would consist of 50 turbines spanning about 32,000 acres of farm land an hour drive southeast of the Twin Cities. The developer is a subsidiary of Mesa Power Group, which is owned by Texas oil-and-gas tycoon T. Boone Pickens.

Last October, about a year after the developer applied for site permits, Goodhue County adopted a setback ordinance that bans wind turbines within 10 rotor diameters, or about half a mile in this case, of any non-participating neighboring home. That’s in stark contrast with state law in Minnesota, which generally requires setbacks between 750 and 1,500 feet based on noise and other factors.

The local ordinance grew out of grassroots opposition from a group of county residents who fear the turbines will upset their quality of life. The developer, which has partnered with about 200 other local property owners, says the project can’t go through under the local setback rules.

Minnesota’s Public Utilities Commission is likely to give its final say on the matter Thursday after months of testimony and discussion. Its decision will be the first major test of a 2007 amendment that gave counties limited authority to adopt more stringent wind setbacks than those spelled out in state law.

Thursday’s hearing will be webcast live on Midwest Energy News, starting at 9:30 a.m.

“It’s certainly something every wind developer is paying close attention to, because one way or another it affects how they’re going to propose their next project,” said Sarah Johnson Phillips, a renewable energy attorney with Stoel Rives in Minneapolis.

What the law says

Under the 1995 Minnesota Wind Siting Act, state regulators have permitting authority over large-scale wind energy developments, defined as any with 5 megawatts capacity or more. Local governments can set rules for any projects smaller than 5 megawatts.

In 2007, the same legislation that created the state’s renewable energy portfolio standard also amended the state’s wind siting act. It gave county boards an option to assume responsibility for wind applications and permits for projects less than 25 megawatts, assuming they follow certain guidelines from the utilities commission. Six counties have since chosen to take on that role, including Stearns, Lyon and Freeborn.

Goodhue County is not among the six counties that has assumed administrative and decision-making responsibility for those wind projects up to 25 megawatts, which is one of the reasons an administrative law judge in April ruled that the amendment doesn’t apply in the case and that the utilities commission has no obligation to consider the county’s setback ordinance.

“This is a test of how far the public utilities commission is willing to go to follow a county ordinance that doesn’t necessarily apply to the project in question,” Johnson Phillips said.

‘It definitely won’t be the same’

The McNamaras own a small organic dairy farm within the proposed wind development. The nearest turbine would be on a neighbor’s property about half a mile from their home, according to the administrative law judge’s report. The McNamaras formed Goodhue Wind Truth to oppose the project and promote their concerns through flyers, newspaper ads and billboards.

The group and its allies have raised a number of complaints. They allege noise, shadows and transmission lines related to the project will lead to lost sleep, sick cattle, dead birds, spoiled views, and depressed home values. They’ve questioned the financial fairness and whether enough of the profits will stay in the community. And they’ve criticized the effectiveness of wind power in general. “It’s not reliable,” said Bruce McNamara. “You don’t know when the wind is going to be blowing.”

McNamara said he is most concerned about the potential health impacts he believes will accompany the turbines, ticking off a list of conditions that include tinnitus, heart palpitations and sleep deprivation. He said he knows this from reading about and talking to people who have lived near turbines in other parts of the world. However, there is no peer-reviewed scientific evidence that turbines have any adverse health effects on humans.

“It definitely won’t be the same as it was before,” McNamara said.

On that last point, Lisa Daniels, founder and executive director of Windustry will agree.

“There is an impact. There is development where there was not development. It changes things,” Daniels said. “But is it in the public interest? Is it for the greater good?”

In this case, the Goodhue Wind development will generate enough clean electricity to provide power to about 23,000 households. That will help the state get closer to its goal of generating 25 percent of its electricity from renewable sources by 2025.

The wind farm would also generate about $6 million local tax revenue over its first two decades, during which it would also pay out about $20 million in land leases and turbine payments to local property owners, about 200 of whom have signed agreements. The developer would employ between 100 and 150 people during construction, and about five employees after that. At least 51 percent of the development’s total revenue would go to Minnesota residents.

Daniels said it’s critical for Minnesota to keep making progress on its renewable energy goals. When it comes to wind, much of the “low-hanging fruit” — sparsely populated agricultural land located near transmission lines — has already been developed. That’s pushing wind developers into more populated areas, which is generating conflicts like the one in Goodhue County, she said.

“It could happen to any wind developer, so every wind developer is watching,” Daniels said. What they’re looking for is potential lessons that might help them better sell the community benefits of wind power. Developers are already approaching site permitting more broadly. “It’s not just wildlife and environmental issues. It’s the community aspects, the people aspects.”

Up next: PUC decision

The developer, AWA Goodhue, declined an interview, but in public filings and testimony it’s made it clear that the project cannot go through under the county’s proposed setback, which would strike 43 of its 50 planned sites. Installing fewer, larger turbines wouldn’t be possible because the county setbacks are based on the size of turbine, and with smaller turbines it could only generate 36 megawatts. Acquiring enough additional land would also be too costly, it said.

The public utilities commission first heard testimony on the Goodhue project in October. Instead of making a decision then, it referred the case to an administrative law judge to settle some of the legal and factual questions around the new county ordinance. Judge Kathleen Sheehy was highly dismissive of the county and opponents claims in her final report (PDF), which was issued April 29.

Sheehy was critical of the lack of evidence to support health and safety claims by project opponents. She noted that three of the most vocal opponents, McNamara and the Coalition for Sensible Siting directors Steve Groth and Ann Buck, live half a mile or more from the nearest proposed turbine. And she said their legal interpretation that the utilities commission must consider any local ordinance “makes no practical sense.”

Overland, the attorney for Goodhue Wind Truth, said the judge “overreached” in her report and that she remains optimistic that the commission will decide in favor of the local setback rules.

Johnson Phillips, who has written about the case on Stoel Rives’ Renewable + Law blog, said that while the utility commission decision should lend some clarity, it’s doubtful that it’s the end of the discussion about state-versus-local wind siting. She said she expects the debate will continue in the Legislature and possibly at the commission.

“The decision itself will be very important to the fate of this particular project, but for the wind industry in Minnesota, I think this is just a focusing event to figure out what the next step is going to be in the conversation about how this process could be improved.”

Dan Haugen is a Minneapolis freelance journalist who writes about business, technology and environmental issues. Contact him at dan@danhaugen.com.

Photo by Mulad via Creative Commons