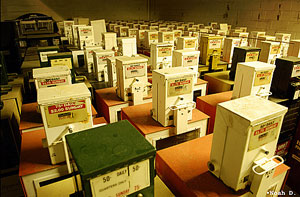 When it comes to reporting on climate change, European media are from hothouse Venus, and their American counterparts are from considerably more frigid Mars. The divide between them may be having a profound impact on climate and energy policy in either part of the world.

European journalists accuse their American counterparts of maintaining a false balance in their reporting, pretending climate science is still in doubt, and offering politicians cover for inaction.

But while that may have been true just a few years ago, it is changing now, say American editors.

For Peter Vandermeersch, editor-in chief at the traditionally conservative daily NRC Handelsblad in Rotterdam, The Netherlands, there is no debate about climate change.

“Absolutely, that’s a given”, he said. “The conviction has grown that climate change does exist, and that humans play a major role in how it evolves.”

“There’s almost no discussion about it”, agreed Wouter Verschelden, editor-in-chief at the progressive daily De Morgen in Brussels, Belgium. “The nonbelievers have been marginalized, and they aren’t taken seriously anymore. We don’t have to convince our readers anymore of the fact that there is climate change, and that it’s caused by humans.”

‘He said, she said’ journalism

According to Vandermeersch and Verschelden, who are both alumni of Columbia University’s vaunted Journalism School in New York, American news media still make the mistake of giving climate skeptics a disproportionate voice, and perpetuating a debate that has long been settled among scientists.

“In a sense, you’re lying to your readers,” says Verschelden. “You’re creating a ‘he said, she said’ story, and looking for an argument that just doesn’t always exist.”

“Journalism in 2011, in Europe, but also in America, ought to be saying, ‘These are the facts, they all point in the same direction, and therefore it’s our job to say that’s how it is,’” said Vandermeersch. “Doing that in a thorough, well-founded, and well-argued manner, is better journalism than just giving equal time to both sides.”

Cristi Kempf, the national foreign editor at the Chicago Tribune, disputes that characterization.

“We don’t have set policy on climate change,” she said. “You have to remember that most European newspapers are papers with point of view, maybe liberal or right wing. Most U.S. papers still do try to retain that objectivity. We will print stories that bring both sides of the view.”

Still, the Europeans’ position has merit, says Max Boykoff, a professor at the University of Colorado’s Center for Science and Technology Policy Research in Boulder, who has done extensive research on the issue.

“Within the top U.S. daily print media there has been this reliance on the journalistic norm of balanced reporting that worked to the detriment of accurately reporting whether or not humans contribute to climate change”, he said. “I found over in the U.K. press, that hasn’t been as much of an influence – in fact, that they’ve been reporting it quite accurately.”

“I think the objectivity standard that U.S. newspapers apply has probably outlived its usefulness on this particular issue”, said Mark Neuzil, a professor of environmental communication at the University of St. Thomas in St. Paul, Minnesota. “At some point you’re not being a decent and good journalist when you’re giving equal weight when 97 percent say one thing, and 3 percent say the other, unless you point that out really clearly.”

“You can’t say there’s a false sense of balance”, said Kempf. “American papers still have that wall between an editorial page and a news page. It’s naïve to believe that a journalist doesn’t have a point of view, but you try to not insult your readers. You’ve got readers who are, of course, members of the Tea Party, or who believe climate change isn’t real. But we also just ran a story about scientists who are getting tons of funding to prove climate change isn’t real.”

According to Boykoff, a number of factors contribute to the difference. Firewalls between opinion and news are more impenetrable in U.S. newsrooms. State-owned media such as the BBC in the U.K., and similar broadcasters in other European countries, have agenda-setting clout that American media lack. Most major U.S. media outlets are corporate owned, leading to a different newsroom culture.

Many American papers are owned by national chains, such as Gannett, the New York Times Company, and the Chicago-based Tribune Company. Few do their own climate reporting, relying instead on syndicated content.

“We use wire service coverage, we don’t have anybody covering climate change”, said Jenny Green, managing editor at the Gannett-owned Indianapolis Star, which has a daily circulation of 180,000 and a newsroom staff of almost 90.

By comparison, the Belgian paper De Morgen, with its newsroom staff of 50 and circulation of 52,000, does employ a full-time climate writer.

“I feel like a lot of North American journalists that I’ve talked to over the years feel constrained by some of these things”, said Boykoff. “These are smart folks that oftentimes are swimming upstream against the current. The journalists themselves are just as savvy as the ones over in Europe, but the way that they can do their reporting over there is different.”

While in Europe the media consensus about climate change coincides with political plans to reshape climate and energy policy dramatically, coverage in the U.S. reflects a much more polarized – and paralyzed – political landscape.

The EU plans to reduce its carbon emissions, lower its energy consumption and raise its renewable energy production all by 20 per cent by 2020. Britain recently launched a massive push to insulate private homes and businesses, and Germany has decided to double its renewable energy generating capacity by 2022.

Meanwhile, in the U.S., climate policy remains mired in partisan squabbles. A federal cap-and-trade plan is a non-starter in ideologically polarized Washington D.C., where any meaningful action on the issue during President Obama’s first term in office seems unlikely.

To what extent are these policy differences a consequence of media coverage?

“The media play a part in shaping public perception, and policy-maker perception and actions on climate change”, said Boykoff. “It’s not insignificant, but to really understand how significant it is – it’s difficult. It hasn’t been done yet.”

“As a consequence of the way papers in Western Europe assess that climate change is real, the public debate in Europe, in my opinion, goes more in the right direction”, said Vandermeersch, who also pointed out that ideologically slanted newsrooms in his part of the world are increasingly a thing of the past. “I think we have a better educated public in Europe than in the U.S., where fake arguments are still on the table, because of that kind of journalism.”

But things are changing stateside, said Neuzil. “The journalists that I know in the mainstream media have more actively reflected the scientific consensus in recent years. They’re not as worried about finding a denier quote every time they do a story.”

The tipping point came in 2005, said Boykoff, with hurricane Katrina, and the release of former Vice-President Al Gore’s documentary “An Inconvenient Truth.”

“There were a number of important events around that time that changed the landscape for that kind of reporting. But meanwhile in television news, it continued. That could be partly just because television news isn’t able to go into the specifics and the contours of complex issues like print journalism can. It became less about U.S. anomalies versus the rest of the world and more about what medium we’re talking about.”

The same is true of the Chicago Tribune, said Kempf. “When people say they are disbelievers of climate change, you have to point out that most of this has been debunked. I would say most of our stories – 75 percent – are overwhelmingly showing that climate change exists. Ice is melting, animals are dying – that kind of thing. And then every once in a while, you get something else.”

Photo by haonavy via Creative Commons