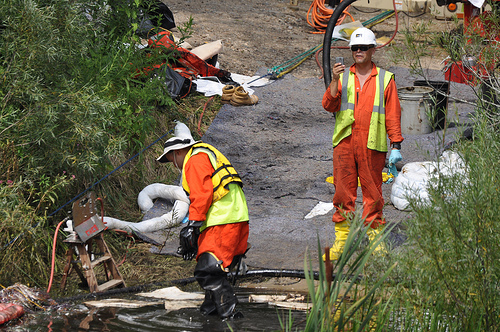 Workers clean up from the 2010 Kalamazoo River oil spill. (Photo by mic stolz via Creative Commons)

Nearly a year after 20,000 barrels of oil spilled into Michigan’s Kalamazoo River from a pipeline owned by the Canadian company Enbridge, Environmental Protection Agency experts and contractors are still working long days to remove deposits of oil that have sunk to the river bottom and mixed with sediment.

The cleanup has been much lengthier and more complicated than most oil spills because the oil is so heavy, according to EPA on-scene coordinator Ralph Dollhopf. The pipeline carried Canadian crude oil that was apparently mostly thick, viscous oil sands bitumen mixed with natural gas-derived diluent to make it liquid enough to transport, a combination known as DilBit. After the spill the volatile diluent quickly separated, releasing benzene into the air, then the heavy remaining oil sands sunk.

The Michigan incident involved about 20 times as much oil as the July 1 spill into the Yellowstone River from an Exxon Mobil pipeline. Environmental and watchdog groups say both spills show the substantial risks posed not just by the Keystone XL pipeline that TransCanada wants to build from the Alberta oil sands to the Texas Gulf Coast, but also of the aging network of existing pipelines that currently carry the bulk of oil sands crude to refineries in the Midwest.

A report released by the Sierra Club, Natural Resources Defense Council and Pipeline Safety Trust in January says the DilBit that would likely make up much of the Keystone XL’s product is especially prone to spill and dangerous to the environment once it does. The groups say much more research on how to prevent and deal with spills is needed before more pipelines are built to carry crude from the oil sands.

The Michigan spill was contained before it reached Lake Michigan or a downstream Superfund site where it could have sparked dangerous chemical reactions with contaminated sediment, but critics say the disaster is evidence of just how damaging inland spills can be. Six weeks after the Michigan spill, nearly 6,000 barrels of oil spilled from a ruptured Enbridge pipeline in the Chicago suburb of Romeoville, causing a spike in gas prices regionally and costing Enbridge $45 million. The Kalamazoo cleanup has so far cost Enbridge $550 million, with more in fines and liability payments to come.

Analysts and environmental groups say transporting oil sands crude is becoming increasingly risky as DilBit, rather than bitumen upgraded to a form closer to conventional crude, makes up an increasing portion of the oil being shipped. They say Canadian refineries are near capacity, and as oil sands production continues to expand companies find it cheaper to ship DilBit rather than upgrading it to synthetic crude before shipping. TransCanada and Enbridge spokespeople did not respond to questions about this assertion.

DilBit now accounts for two-thirds of all Canadian oil sands exports to the U.S. – about 600,000 barrels a year, according to the Canadian Association of Petroleum Producers, a six-fold increase in the past decade. By 2019 Alberta’s Energy Resources Conservation Board expects to export 1.5 million barrels of DilBit to the U.S. annually.

Compared to conventional or synthetic crude oil, DilBit is rich with caustic and toxic components and also thought to be more abrasive. In testimony before the House Committee on Energy and Commerce on June 16, NRDC policy analyst Anthony Swift described DilBit as a “corrosive, acidic and potentially unstable blend of thick raw bitumen and volatile natural gas liquid condensate.”

In May TransCanada’s Keystone pipeline — a precursor to the Keystone XL — spilled 500 barrels in North Dakota, after a break at a pumping station caused oil to reportedly shoot 60 feet into the air. TransCanada spokesperson Terry Cunha said the oil landed on gravel and was quickly cleaned up.

However, Cunha, and Enbridge spokesperson Lorraine Grymala, said that there is no evidence oil sands crude is more likely to cause spills or weaken pipelines.

“We have been transporting Western Canadian crude oil since 1999 and we have seen no evidence that DilBit is more corrosive or that it poses more risk than transporting any other grade of crude oil,” Grymala said by email. “Oil from the Canadian oil sands has been produced since 1978 and is not significantly different from oil transported by other crude oil pipelines. It is also not that different than other heavy oils that come from places like California, Mexico, Nigeria and Russia. After decades of transportation on the Enbridge system, there is no evidence that internal corrosion is caused by transporting oil from the Canadian oil sands”

“Oil is oil,” Cunha said by email. “The oil that is already being delivered on Keystone is no different than other crude oils. The same is true for oil that would be shipped on Keystone XL.”

But environmental groups say the risks of oil sands DilBit are two-fold. On one hand they think the mixture’s properties are more likely to cause corrosion and hence leak or spill from pipelines. It has more corrosive sulfur and chloride salt, and more abrasive particles including quartz and pyrite. Along with its corrosive characteristics, DilBit must be pumped at higher pressure and higher temperatures – about 150 degrees Fahrenheit — than conventional oil, potentially putting more stress on pipelines.

Then when DilBit does spill, it is believed to be more harmful to the environment – because of higher levels of heavy metals and other toxics – and the volatile properties of the gas used for dilution also pose an explosion risk. DilBit includes relatively high concentrations of carcinogenic polycyclic aromatic hydrocarbons (PAHs) and benzene and a highly flammable natural gas compound called pentane. And as the Kalamazoo spill showed, DilBit spills in water are harder to clean up since the heavy oil sands oil sinks after the lighter components have separated, hence it can’t be easily skimmed off the top like conventional oil.

Carl Weimer, executive director of the Pipeline Safety Trust, said he is not convinced DilBit increases the risk of spills, but the possibility is “the big gorilla in the room that hasn’t been answered.”

“All the research shows it certainly could be more corrosive and more abrasive,” he said. “What the companies are doing to mitigate that before it goes into the pipeline is unclear to me, and it also seems unclear to the federal regulators…These companies aren’t forthcoming about what they are using to move the oil with.”

The National Transportation Safety Board is still investigating the Kalamazoo and Romeoville spills on the Enbridge system. Damon Hill, a spokesman for the federal Pipeline and Hazardous Materials Safety Administration (PHMSA), said the agency is currently reviewing the safety of Enbridge pipelines, as a routine matter, not because of the spills.

“PHMSA maintains stringent federal pipeline safety regulations requiring operators that transport hazardous liquids to demonstrate that their pipeline system is compatible with the type of product being transported to ensure its ability to operate safely without incident,” Hill said.

Last October Enbridge opened a new pipeline, the Alberta Clipper, taking oil sands from Canada to Superior, Wisconsin; and the company has proposed expanding its existing Southern Access pipeline by hundreds of miles in Wisconsin and Illinois. Last summer the CEO of Enbridge’s U.S. subsidiary, Pat Daniels, said the Southern Access project is on hold for economic reasons. Grymala did not respond to queries about its status.

The Keystone XL proposal is currently undergoing a mandated review under the National Environmental Protection Act (NEPA), and U.S. legislators including Rep. Henry Waxman (D-Calif.) and Sen. Mike Johanns (R-Neb.) have spoken out against it. Sen. Ron Wyden has called for a Federal Trade Commission investigation of claims the pipeline will drive up oil prices.

But Cunha said TransCanada is confident about the prospects of the Keystone XL.

“We believe that the Keystone XL Pipeline will be approved and built,” she said by email. “Keystone XL will help replace unstable crude oil from regions like Libya and the Middle East with stable, secure supplies from both the U.S. and Canada. This $7 billion project will spur more than $20 billion in new spending for the U.S. economy and directly create 20,000 high-wage manufacturing and construction jobs across the U.S.”

Swift said U.S. residents should be worried not only about the potential problems from Keystone XL, but with existing risks from the pipelines carrying oil sands, including a sprawling network underlying the Chicago area.

“You have a lot of older pipelines that may have additional risk factors in the Midwest – if you’re running this kind of stuff in a pipeline that already has 40 years use, you’re basically dealing with a very abrasive product that is moving in a pipeline that may already be weakened,” said Swift. “This issue is not going away for the Midwest. It’s absolutely critical that we get a handle on it.”