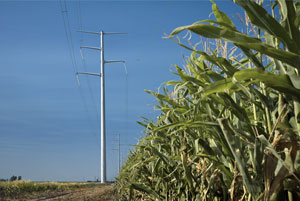 CapX2020, the coalition of Midwest utilities already working on one of the largest transmission build-outs in the country, is now looking out even further at a plan to develop a second set of power lines.

New rules recently issued by the Federal Energy Regulatory Commission (FERC) create a class of “multi-value projects” – those that support public policy requirements or bolster reliability – for which energy customers across the region pay for. Many future projects championed by CapX2020 are likely to have the multi-value designation.

CapX2020 is currently navigating the gauntlet of regulatory approval hurdles for lines already planned out, projects that amount to a nearly $1.9 billion investment.

As those projects march forward, planners are eager to get a jumpstart on a future build-out, one several years from actual work but one that CapX2020 members say will eventually be needed to serve growing local economies and increasing energy needs.

Given that it takes several years to get local government and state regulators to approve plans, owing to inevitable environmental and aesthetic concerns, it is necessary to constantly be looking out to the next decade, said Tim Carlsgaard, a spokesman for Xcel Energy, which is among the utilities spearheading the CapX2020 efforts.

“It can take seven to 10 years from the planning stages to actually clearing” all the regulatory requirements, Carlsgaard said. For the second set of lines, “we are only very early on. Everybody is doing the analysis work now, assessing what the needs are, what needs to be prioritized.”

Carlsgaard emphasized that second-stage ideas are only at a point of spitballing for possibilities, not formally planned projects, but some early focus has centered on these potential future lines:

— A line running from Ellendale, N.D., in southeastern North Dakota, to the Big Stone station near Milbank, S.D.

— A line running from Big Stone to rural Brookings, S.D.

— And a line running from La Crosse County, Wis., to the Madison, Wis., area.

Another project might include upgrading a line that runs from Granite Falls, Minn., to the Twin Cities area, Carlsgaard said.

Such projects would span several hundred miles in all, and Jared Alholinna, a transmission planning engineer at Great River Energy and a planner for CapX2020, said the cost of 345-kV lines is about $3 million per mile, meaning future build-outs would cost hundreds of millions of dollars.

The projects in the Dakotas and Wisconsin noted above are being reviewed by the Midwest Independent Transmission System Operator’s (MISO) board of directors for status as “multi-value projects,” meaning they would add widespread benefit to the region’s needs and be eligible for regional cost recovery. Under such cost recovery, customers throughout the Midwest chip in to pay for the project.

Having that funding as a backdrop helps explain why the possible future projects CapX2020 is eyeing align with MISO’s goals, but Alholinna said it is also because companies involved in planning transmission lines need to work on a region-wide basis to make sure that lines are not redundant.

“We don’t want transmission lines running parallel to each other,” Alholinna said. “So you have to coordinate with your adjacent utilities.”

And, when projects eventually move forward, planners have to coordinate extensively with landowners, environmental groups, regulators and others to both get their approval and determine which areas of the region need to be prioritized.

“It has to be vetted by a wide variety of stakeholders,” Alholinna said. “It can take up to 10 years from concept to construction, so that’s why we need to be looking way out.”