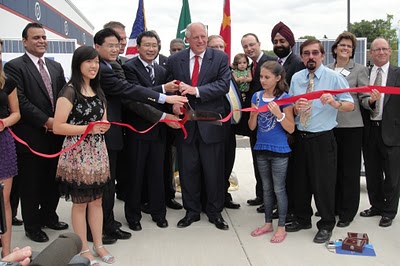 Illinois Gov. Pat Quinn at a ribbon-cutting ceremony for the Wanxiang solar farm in Rockford, Illinois, in August 2010. The project, announced to much fanfare, has languished due to lack of funds. (Photo courtesy Illinois Governor's Office)

A solar project heralded a year ago by Illinois Gov. Pat Quinn as helping create “hundreds of sustainable, green-collar jobs and providing an economic boost to the entire state,” has had trouble getting financing, and has drastically scaled back its short-term ambitions.

At the time, the proposed Rockford Solar Project in Rockford, Ill., was to have been the Midwest’s largest solar farm, but Pin Ni, the chief executive of Wanxiang America, a leading partner in the joint venture building the facility, told Midwest Energy News that in terms of financing, “we’re in the middle of nowhere.”

The difficulty experienced by even Wanxiang, a company known in the business world for having deep pockets, may illustrate just how tough solar developers will find the Midwest, especially as the economy continues to struggle.

Some say the government should follow the lead of China and Germany and invest heavily in the industry. “Nuclear power, natural gas, petrol and coal are all subsidized,” said Everton Walters, president of Naperville, Ill.-based WCP Solar Services LLC., which is not involved with the Rockford project.

But while the federal stimulus package pumped billions into renewable energy, that money has largely been allocated, leaving entrepreneurs like Walters scrambling to patch together start-up funding. Like other states, he added, “Illinois is at low ebb” in available funding.

Still, Wanxiang did get some money from the state, enough to at least get a smaller version of the solar farm started. And Walters believes that may be enough. Once it’s up and producing power, more private investors in the region “will understand that solar does indeed work; that it’s not a fad.”

Located on the banks of the Rock River about 80 miles northwest of Chicago, Rockford is like many small Midwestern cities. A generation ago, it was a blue-collar powerhouse filled with machine shops and factories. Today, many of those workplaces have vanished, taking away thousands of jobs, and the city now looks to green industries for help.

In April 2010, Rockford got a boost when Wanxiang, an Elgin, Ill.-based subsidiary of one of China’s largest privately-owned companies, opened a 40,000 square-foot solar panel factory. And in August 2010, Gov. Quinn announced with great fanfare that the state was giving Wanxiang a $4 million grant to kick-start the development of a 62-megawatt solar farm at the city’s airport.

The Wanxiang proposal was an appealing vision. If fulfilled, Wanxiang would provide the city of 152,000 with power for 10,000 homes. The only other major solar farm proposed for the state was a 10 megawatt facility in Chicago owned by Exelon Corp., the parent company of ComEd, a public utility in northern Illinois. But what made Wanxiang’s proposal especially effective was the company’s plan to manufacture the farm’s solar panels at their new Rockford plant.

“That’s the real cycle we’re [trying] to support,” said Jonathan Feipel, deputy director of the Illinois Energy Office at the Illinois Department of Commerce and Economic Opportunity, which awarded the grant. “It’s the perfect win-win for the state.” City officials were once hopeful that the solar panel factory would employ as many as 240 workers.

But Ni has dashed a bit of cold water on those expectations. “Financially, [getting to 62 megawatts] is going to be a challenge,” he said. In fact, right now, he says he does not see how it can be done.

The new plan, if the project receives approval this fall from federal environmental and aviation officials, is to build an approximately 3 megawatt demonstration project and then search for private investment to expand the farm.

“We can’t just depend on the government,” Ni said, and explained that even a 20 megawatt farm could cost $80 million.

Currently, the solar plant only employs between 10 and 15 people and many of its products go to out-of-state customers.

Since 2009, Illinois has received over $100 million from the U.S. Department of Energy’s State Energy program. The money originated with the 2009 federal stimulus package, and has been committed to over 100 energy projects with $67 million going to wind, solar and other green businesses. Feipel said that while the Wanxiang grant might seem relatively small, it will cover much of the project’s initial equipment costs. In fact, without state funding, it was just one of many proposals that would have remained completely dormant.

Ni said the grant was crucial, even if the money only covers less than 2 percent of the total cost of the project. “I won’t say [government subsidies are] the solution, but it’s a very big part. It shows significant support from the state,” and that’s still important to banks and other private investors.

Feipel admitted that developing renewable energy will get even tougher without the stimulus money. “This kind of public funding is much maligned these days,” and from now on Illinois will fund green energy projects with a smaller state program set up in 1997 that can provide about $5 million per year.

Other Midwestern experts agree. “We had this influx of stimulus dollars,” which the DOE targeted in a strategic way, said Skip Pruss, the former director of Michigan’s Department of Energy, Labor and Economic Growth. Now, “what we have is a patchwork of programs and incentives that does not represent a cohesive national strategy. We need something to fill that space; otherwise the U.S. will lose ground to the rest of the world.”

Illinois and 35 other states have passed mandates or goals meant to push investment into renewable energy. In 2007, Illinois legislators voted to mandate that by 2025, 25 percent of the state’s energy had to come from renewable sources, including a small portion from solar (Fresh Energy, which publishes Midwest Energy News, is among a coalition of groups pushing for a solar-specific mandate in Minnesota).

Critics say such mandates force ratepayers to subsidize costly new technology. Solar power is typically more expensive than coal or natural gas, but solar costs are declining while costs associated with fossil fuel generation are expected to increase over time.

Utility executives say the mandates are a powerful tool to encourage the construction of solar and wind farms. The mandates get utilities to sign purchase agreements with wind and solar providers, and with these contracts, builders can attract additional investment.

“The investors and lenders want to see you’ll have an income stream,” before they finance construction, said David Ronk, the director of transactions and resource planning for Consumers Energy, a Michigan utility that supplies power to nearly 7 million people. Ronk added that Consumers Energy began issuing requests for proposals to provide the utility with solar and wind power once they saw that the 2008 law would be enacted. Currently, about 5 percent of the utility’s electricity comes from renewable sources, and they plan to double that by 2015.

Ni, however, is not convinced the state of Illinois has done enough to make solar power viable. Wanxiang and several other renewable energy producers were selected last December to supply Illinois utilities with power, but Wanxiang’s purchasing agreement was only for 3.5 megawatts, he said. He maintains that the state needs to approve larger power purchasing agreements before private investors will even consider sinking the amount of capital needed to build the 62 megawatt farm that was presented to the public last year.

He said he remains deeply committed in the long-term to both the Rockford community and solar power. “I don’t mind if we don’t make money, but I do mind if we lose money.”