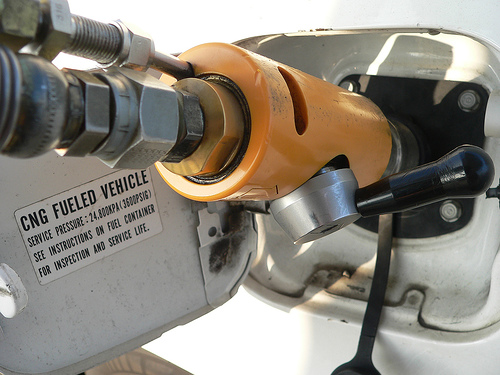 Electric vehicles are on a roll, with charging stations popping up in cities nationwide, federal subsidies for car buyers and much anticipation around the rollout of new cars.

But proponents of another type of vehicle say they are quietly laying the groundwork for an alternative to the electric car, and they wish they were getting more attention and federal support.

Vehicles that run on compressed natural gas (CNG) fuel emit about a quarter less carbon dioxide than gasoline engines and very low levels of compounds harmful to public health. Filling up on natural gas currently costs about one fourth to one half as much as traditional gasoline per mile driven. Fueling a natural gas vehicle can take only five to 10 minutes, compared to up to eight hours to recharge an electric car, and vehicles can go much farther on a tank of CNG than an electric battery.

So natural gas companies and other proponents – including energy mogul T. Boone Pickens — are calling for a “level playing field” in terms of government subsidies and urging consumers and automakers to consider natural gas vehicles.

But while the fuel for CNG vehicles may be cheap, the infrastructure is not. It can cost more than $1 million to install a commercial natural gas fueling station, whereas an electric car can plug into a standard household outlet. Even a 480-volt fast-charging station, which can charge a Nissan Leaf’s battery in under an hour, costs about $20,000.

There is only one consumer vehicle on the market that runs solely on natural gas – the Honda Civic GX. It costs about $25,000, comparable to the all-electric Nissan Leaf, which the company advertises at $27,700 after incentives.

Many cars can be converted to run on both natural gas and traditional gasoline, and natural gas proponents say these are becoming increasingly popular with consumers. However, only certain vehicles – mostly American-made pickups and SUVs – can be legally converted, and the aftermarket conversions can cost around $10,000-$12,000.

Little federal support exists for natural gas vehicles. A $30,000 federal tax break for fueling stations expires at the end of the year, and given the cost of stations, proponents say it is relatively insignificant.

Various municipalities have also converted part or all of their fleets of transit buses, garbage trucks and other heavy vehicles to CNG, as have private companies including United Parcel Service, AT&T and Waste Management.

“They say they are doing it for environmental reasons, but when it comes down to it it’s really economic,” said David Hill, vice president of natural gas economy for Encana, the Denver-based natural gas company.

Economies of scale mean it is more efficient for owners of numerous large vehicles to invest in the technology and their own fueling stations, since the more fuel they use the more quickly they can recoup their investment. The cost of filling a vehicle with CNG varies by location, as low as 78 cents for the mileage equivalent of a gallon of gasoline in Oklahoma City and around $2.50 in the Chicago area.

Kathryn Clay represents natural gas producers and distributors as executive director of the joint American Gas Association and America’s Natural Gas Alliance (AGA-ANGA). She also formerly specialized in electric vehicles in her role as vice president of research and technology policy for the Alliance of Automobile Manufacturers and also working for U.S. Senate and House committees on energy and alternative fuels. Clay sees natural gas vehicles becoming increasingly common in the next decade as more natural gas stations are set up to fuel long-haul trucks and even barges.

Tractor-trailer trucks can efficiently burn liquefied natural gas (LNG), which involves separate fueling stations and which is not considered an option for smaller vehicles since it is more expensive to produce and has to be kept cold -– to maintain its liquid state — in cryogenic tanks. But Clay said it makes sense to build LNG and CNG stations in tandem. She sees such stations on trucking or shipping routes as forming a “trunk” of natural gas fueling stations, increasing the motivation for other companies to build stations on “branches” near those routes.

Natural gas industry leaders, including Encana and Oklahoma-based Chesapeake, are in the process of converting their own fleets to natural gas, building their own fueling stations and making the stations available to the public in an effort to build consumer interest.

Chesapeake has converted all its light duty trucks to natural gas and plans to convert about 5,000 vehicles within the next five years, according to director of market development Norman Herrera. Encana has built one station north of Denver, one in Shreveport, two in Canada and it has one under construction in Wyoming. The company also worked with the city of Grand Junction, Colorado, to build two fueling stations there.

“We’re building in the communities we’re operating in, so government fleets and the public can have access to fueling stations,” said Hill. He noted that the company also plans to convert its drilling rigs to operate on natural gas – currently 15 of their North American rigs do so.

Natural gas companies have also invested in or partnered with convenience stores and other gas stations to add natural gas fueling stations – a proposition which isn’t always easy since the infrastructure takes up a lot of space. Chesapeake has helped create 14 public fueling stations in Oklahoma and is planning more in other states, according to Herrera, who drives a bi-fuel Chevy Tahoe that runs on both gasoline and natural gas.

Also, natural gas companies note that when a home is already heated with natural gas, it is relatively simple to install an at-home fueling station for a vehicle.

The price of natural gas has plummeted in recent years because vast new deposits have become accessible because of new hydraulic fracturing (or fracking) techniques. While environmentalists and others criticize the process as potentially harmful to water supplies, natural gas industry spokespeople maintain that fracking is generally environmentally safe when done right, and they also point to the environmental issues involved with extracting oil for traditional gasoline and coal, which provides about half the nation’s electricity.

‘There’s room for all of us’

Natural gas vehicles are much more popular outside the U.S., with about 13 million in operation worldwide. In the U.S. there are about 110,000 to 125,000 natural gas vehicles on the roads, the majority of them buses, garbage trucks and other large vehicles in government or private fleets.

Natural gas proponents say that natural gas vehicles should be getting as much government support as electric vehicles.

“You want to have parity in alternative vehicles,” said Herrera. “You want both fuels to be to be treated equally.”

A House bill introduced last spring, the New Alternative Transportation to Give Americans Solutions (NAT GAS) Act, would create incentives for natural gas vehicles, including increasing the tax break for fueling stations more than three-fold to $100,000 and offering incentives for purchasing natural gas and bi-fuel natural gas vehicles. It would provide tax credits of up to $7,500 for light duty passenger vehicles and up to $64,000 for heavy trucks.

But Clay said that given the lower price of natural gas, even without government support she thinks some consumers will eventually think it is worth their while to buy natural gas vehicles.

“The market will decide, and it will naturally segment,” said Clay, whose doctorate focused on the physics of battery technology. “Given today’s technology it’s going to be challenging to design a battery that can go 100 miles on one charge. Where range is important, natural gas would clearly have an advantage. In urban areas, maybe more people will go electric.”

Hill said he’d like to see more and equal subsidies for various types of alternative vehicles including propane, hydrogen and biofuel in addition to natural gas and electric.

“We need a portfolio of different fuels for different applications,” he said. “There’s room for all of us and we have room to grow.”