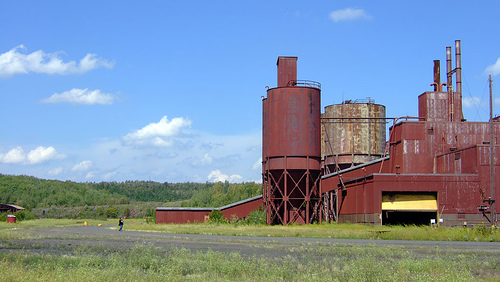 Part of the former LTV mining facility near Hoyt Lakes, Minnesota, that will now be used to process nickel ore.

Part of the former LTV mining facility near Hoyt Lakes, Minnesota, that will now be used to process nickel ore.

Two projects that in particular are drawing attention – one near Minnesota’s Boundary Waters, and another in Michigan’s Upper Peninsula – are projected to produce more than 23,000 tons of nickel, along with other materials.

The projects have won support from politicians eager to create jobs, but the newly proposed projects use sulfide mining, a process that could have a catastrophic impact on nearby waterways.

Because the concentration of nickel in the surrounding rock is often less than 1 percent, the mining process produces a large amount of waste rock, or tailings, that are stored on the mine site. Sulfides remaining in these tailings can react with surface water and oxygen in the air to produce sulfuric acid, the same as is used as battery acid. The highly corrosive acid must be contained with impermeable plastic barriers to prevent it from escaping the tailings fields entering streams and rivers and ultimately into nearby Lake Superior.

Nickel is one of those workhorse metals, like iron, copper, lead and aluminum, that is critical for modern society. While used in batteries and fuel cells, it is nickel’s ability to resist corrosion and greatly improve the high temperature strength of steels that makes the dull silver metal most valuable, particularly in power plants.

The majority of the world’s nickel comes from Russia, Canada, Indonesia and Australia, with Canada supplying about 30 percent of the demand. The United States has nickel deposits that are often co-located with copper deposits, many of which are located near the shores of Lake Superior.

In northern Minnesota, Polymet Mining Corporation plans to create two open pit mines on a 4,300 acre site to extract nickel and copper from an area better known for its decades of taconite iron mining.

With broad bipartisan political support, Polymet, a Canadian company, plans to remove more than 32,000 tons of ore per day from its pit mines and transport it 8 miles by rail to a processing plant. The company’s goal is to annually produce 7,700 tons of nickel, along with 36,000 tons of copper, 360 tons of cobalt and 7,200 pounds of precious metals, including platinum, palladium, and gold.

Polymet’s location, not far from Hoyt Lakes, Minnesota, is the site of the bankrupt LTV taconite mining company. Polymet plans to dig its two pit mines six miles to the northeast, on a forested tract of land owned by the U.S. Forest Service. A deal, supported by both of Minnesota’s main political parties, would require Polymet to transfer a comparably–sized piece of land to the Superior National Forest in exchange for the 4,300 acre tract it wants to mine.

The land Polymet wants is protected by a 1911 federal law that prohibits strip mining on national forest lands, a technicality that will need to be overcome by special legislation to allow the plans to move forward. Another stumbling block for Polymet is an “Environmentally Unsatisfactory- Inadequate” (the lowest rating possible) review of the first draft of their Environmental Impact Study by the EPA.

Minnesota lawmakers have also proposed an increase in the allowable levels of sulfate levels in rivers and lakes that feed areas growing wild rice from 10 milligrams per liter to 250 milligrams per liter to accommodate the mining plans, but the bill did not pass. The Minnesota Pollution Control Agency has been tasked with researching how sulfate levels affect wild rice.

In July, the Swiss company Glencore, Polymet’s biggest investor, announced that it had hired Tony Hayward, BP’s CEO during the Gulf of Mexico oil spill to be the “executive expert in charge of environment and safety” for projects such as the Polymet mine, further outraging critics of the project.

Polymet spokeswoman LaTisha Gietzen said that mining operations would begin “about a year” after the permits have been issued with a current target date of 2013.

Elsewhere in the Great Lakes

Meanwhile, Kennecott Eagle Minerals, a subsidiary of the mammoth London-based Rio Tinto, has begun construction of a subsurface mine in Michigan’s upper Peninsula, about 9 miles from the shore of Lake Superior. The mine is supposed to begin operation in 2013 producing 16,000 tons of nickel and 10,000 tons of copper annually. The Kennecott Eagle mine will be subsurface, requiring a smaller land footprint (about 120 acres) than Polymet’s open pit mine. Tailings will eventually be returned below the surface reducing, but not eliminating, the potential for acid rock drainage into Lake Superior’s watershed.

It won’t be Kennecott’s first efforts at sulfide mining in the Midwest. The company operated the Flambeau facility, an open pit copper and precious metals mine near Ladysmith, Wisconsin from 1993 through 1997. Reclamation took place in 1997 through 1999 when the 32-acre, 220 foot deep pit was backfilled with waste rock mixed with limestone and the ground-water level was raised to cover the sulfide minerals in the mine to reduce the possibility of oxidation through exposure to the atmosphere.

In December 2010, Duluth Metals Minnesota (a Canadian company) acquired Franconia Minerals Corporation (another Canadian company) to create a combined holding of 56,000 acres in mineral rights along a ten-mile stretch of the Kawishiwi River and Birch Lake, south of Ely, Minnesota. The company plans to operate a subsurface sulfide nickel and copper mine there in cooperation with Chilean mining giant Anotfagasta in a joint venture called Twin Metals Minnesota.

Minnesota has never before permitted a sulfide mine. Wisconsin enacted legislation on sulfide ore mining in 1997, requiring potential mine operators to “present evidence that sulfide mines have been operated and closed without causing pollution to ground or surface water.” Although the law’s intent was not to create a moratorium on sulfide mining in the state, since then, no sulfide mining permits have been issued in Wisconsin. A 2004 Michigan law allows sulfide mining, but with a list of environmental safeguards.

Lawmakers in Minnesota and Michigan are balancing that environmental risk against the need to create jobs in the states’ economically hard-hit mining regions.

Between 1979 and 2005, employment in Minnesota’s iron mining industry declined by 73 percent. Polymet plans on hiring more than 360 permanent employees with an annual $36 million payroll, and estimates an additional 500 spinoff jobs will results from its project. This is irresistible to Minnesota legislators, just as it has been for Michigan’s politicians, who approved the Kennecott Eagle Mine near the shores of Lake Superior. Both regions have similar histories of iron mining and strong support for the creation of new mining jobs. Iron mining however, does not have the problem of sulfuric acid rock drainage from which sulfide mining suffers.

Polymet’s Gietzen notes that the level of sulfur in the region of the company’s proposed Minnesota mine is about 1 percent, much lower than the more problematic 30 percent levels found in typical sulfide mines.

Critics of Polymet claim that the company has never actually operated a mine before and that it could be woefully underfunded should an accident occur that requires significant environmental cleanup.

In the event of closure, Minnesota law requires that before mining begins the company must set aside bankruptcy-proof financial resources to pay for shutdown costs.