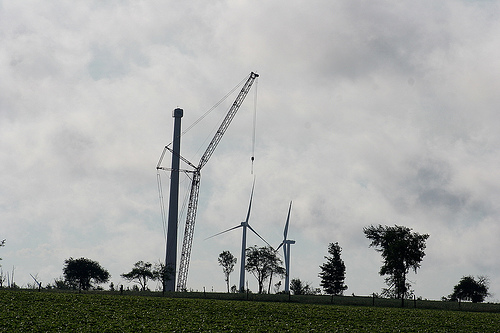 Minnesota wind developer Dan Juhl has seen the scenario before.

The wind production tax credit – seen as a key incentive to bringing new wind energy projects online – nears its expiration date, expires without legislative action and then comes barreling back, reviving the industry after a period of stagnation.

It’s a sequence of events that has played out three times in the last decade, most recently in 2003, and is unfolding again today. The current tax credit, which provides developers with 2.2 cents per kilowatt-hour for electricity produced from utility-scale wind turbines, is set to expire at the end of 2012.

Industry officials have called for a long-term extension, but so far no action has been taken. Senate Majority Leader Harry Reid, D-Nev., recently said he was “not confident” it would pass given the mood in Washington, and wind energy proponents said they would not hazard to guess at its fate.

You would think that Juhl, the chairman and chief executive at Juhl Wind Inc., would be carefully tracking the issue. His company is behind four of the 15 new wind energy projects expected to come online in Minnesota before 2012, and has longer-term ambitions.

But Juhl said he no longer relies on the whims of Congress when thinking about the future. The need for alternative energy, he said, is simply too strong to be tempered by tax policy, he said. And besides, the tax credit has always returned.

“The tax credit has been extended many times, and many times it’s at the very last minute or a month after,” Juhl said. “You can’t really throw in the towel; you just have to keep moving ahead.”

Others aren’t so confident, however.

Around the Midwest, wind energy proponents are making the case that the credit needs to be extended for a decade or more. The issue has risen to the top of the wind energy agenda, and urgency grows with each month that passes without action.

“Without a doubt, the expiration of the production tax credit is of great concern to our industry,” said Jeff Anthony, the director of businesses development at the American Wind Energy Association. “It has expired three times in the past, and each time it has resulted in major disruption.”

“It puts a big hiccup in the industry and just continues the boom and bust cycle that we’re trying to break,” he said.

According to AWEA, 35 percent of all new generating capacity added in the United States over the last four years has come from wind turbines.The organization reported in August that there had been 2,151 megawatts of new wind energy capacity installed in the first half of 2011, up 72 percent from the same time period a year before.

Officials are forecasting continued growth, too. In Minnesota, now the country’s fourth-largest wind-energy-producing state, wind power is seen as the primary way to meet the state’s renewable energy standard.

Minnesota’s wind farms currently have a load capacity of 2,518 megawatts, enough to power 700,000 homes at a given time. The capacity will need to more than double for the state to obtain a quarter of its energy supply from renewable resources by 2020, according to a 2006 report (PDF) by the EnerNex Corporation. The model assumes energy consumption will increase 1 percent annually. The state aims to get a quarter of its energy from renewable resources by 2025.

In Iowa – which now leads the country in wind energy consumption – officials hope to get 30 percent of the state’s energy from wind by the end of 2012. Companies around the state are scrambling to get their projects completed by the end of next year, a rush that is playing out around the country as the tax credit deadline looms.

“There’s a huge rush to get every project in the ground right now,” said Harold Prior, the executive director of the Iowa Wind Energy Association, which is pushing for a ten-year extension of the tax credit.

But the momentum that has been building could come to an abrupt halt if the production tax credit is allowed to expire, industry officials say.

They point to previous instances when the tax credit was allowed to expire as evidence. In 2004, the last year after the production tax credit lapsed, just 389 new megawatts were installed nationally – a 76 percent drop from the year before.

Such a drop-off hurts manufacturers who make component parts, leads to job losses in the construction field and could slow progress for several years as companies adjust, officials say.

“Any smart business is going to have a plan for multiple scenarios, and most companies probably have a plan in place, but there is still likely to be a downturn as companies adjust,” said Josh Gackle, a policy manager at Wind on the Wires.

“That (adjusting) will be harder for some companies, easier for others,” he said.

State renewable energy standards, which require utilities to buy a set amount of energy from renewable resources, have helped support much of the wind industry’s growth in recent years. The standards are designed to create a market incentive for renewable resources, making them competitive with traditional energy supplies such as coal.

But the standards only work if alternative sources are reasonably priced, officials say, and losing the tax credit is almost certain to make buying wind energy more expensive. If allowed to lapse, the costs for new projects could be pushed to ratepayers, which could in some cases trigger cost-containment measures that would relieve utilities of their renewable-energy requirements.

But rates can increase no more than 0.5 percent above the previous year – a limit officials say could be exceeded if the production tax credit disappears, and costs are pushed on to consumers.

“If the PTC were to go away would the cost of complying go beyond that? Probably,” said Kevin Borgia, the co-founder and executive director at the Illinois Wind Energy Association.

Borgia and others say such a scenario is all the more frustrating given that fossil fuels have enjoyed near-permanent subsidies, making it difficult for renewables to compete on costs.

A recent report by DBL Investors, for example, found that the oil, gas and nuclear industries received substantially larger subsidies than renewables in the early years of their development, as measured as a percentage of federal spending.

“This (uncertainty) doesn’t happen with oil and gas industries, where the tax incentives have been permanent for 100 years,” Borgia said. “That provides clear, consistent signals for an industry. If we want to boost renewable energy, we need to provide stable signals to the market, and the current situation has really been this start-stop, constant uncertainty, and that needs to stop.”

Strong enough to stand on its own?

Whether or not the industry is capable of standing on its own without the tax credit is a question that only time will tell.

Prior, of the Iowa Wind Energy Association, said favorable purchase agreements, uncertainties over coal, nuclear and natural gas energy supplies, and the prospect of stable long-term wind energy costs are all working in the industry’s favor, with or without the tax incentives in place.

“There will be a point with this industry where we won’t be dependent on the production tax credit, and I think we’re getting close,” he said. “If it doesn’t get renewed, we’re going to learn a lot about whether we’ve reached that tipping point or not.”

Given the growth of the industry, Prior said, the money could more appropriately be used to upgrade infrastructure. Deficiencies in the country’s transmission system, he said, is one of the biggest obstacles to new development, he said.

“If they wanted to redirect the money, it should be directed to transmission projects,” Prior said. “There haven’t been a lot of upgrades in 50 or 60 years, and as more sources of generation come up, that’s something that really needs to happen.”

Others say there may be more effective incentive structures than tax credits.

John Farrell, a senior researcher with the Institute for Local Self-Reliance, advocates for a cash grant system that would allow investors with less capital, non-profits, and governments to participate in the wind energy build out, and a feed-in tariff system that ensures stable purchase prices.

Cash grants were approved as part of the stimulus package but are set to expire at the end of this year. And the tariff system, while popular in Europe, has been a non-starter in the United States. The tariffs would guarantee developers a set rate per kilowatt hour, paid by utilities under a regulated, long-term contract.

“We have advocated for that because it takes a lot of the risk and red tape out of the wind energy process,” Farell said. “The tax credit is probably the most difficult incentive to use.”

Still, Farell and others say extending the production tax credit remains the most politically acceptable means of supporting the industry, and that they would like to see it extended before tackling the larger, structural issues that exist.

Juhl, the Minnesota wind developer, says wind is the only energy supply that offers a long-term fixed cost, can be generated domestically and does not rely on fossil fuels.

“Hopefully our country is smart enough to realize we need to do everything we can to develop our own domestic resources of energy, and that wind is a part of that.”

EDITOR’S NOTE: An earlier version of this story misstated the increase in installed wind capacity from 2010 to 2011.