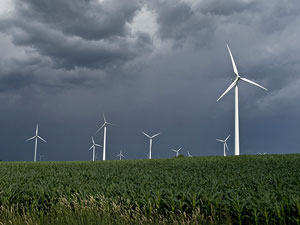 If the weather report says it’s supposed to be sunny and breezy tomorrow, do you trust that forecast enough to plan a picnic or hike?

But what if instead of a soggy lunch or wet boots, the efficiency and reliability of the region’s electricity grid was at risk?

Those are the stakes that grid operators face around the clock as they incorporate wind power into the system.

Wind is a variable energy source, which means, unlike coal or gas plants, grid operators never know precisely how much power wind farms will generate at a given time. They depend on weather forecasts to estimate how much power turbines will produce in the hours and days ahead.

Those forecasts are critical for getting the most value — economic and environmental — out of wind energy. A grid operator needs to trust a forecast before it will shut down or reduce generation at more expensive and polluting fossil fuel plants.

That’s why NOAA recently partnered with the U.S. Department of Energy on a study called the Wind Forecast Improvement Project, which will attempt to measure the economic value of improved forecasting to the energy industry.

There’s reason to believe that it’s significant. Marquis is co-author of a report published in the September issue of the Bulletin of American Meteorological Society that pegs the number somewhere between $1 billion and $4 billion annually, based on previously published studies.

In the past several weeks, the agencies have deployed more than a dozen new wind detection instruments across a 300-square-mile rectangle over the Upper Midwest, including parts of Minnesota, Iowa, Wisconsin, Nebraska, Missouri, and most of North and South Dakota. NOAA is also making a next-generation weather modeling service available to its research partners, which include St. Paul forecasting firm WindLogics.

“We’re determining — how much does that stuff help improve the wind power forecast?” says WindLogics CEO Mark Ahlstrom. The company will compare the accuracy of its forecasts over the next year with and without the new government tools. It will then work with its customers to determine how their decisions would have been different with the new data. “What we’re trying to say is: is there enough of a cost savings to build a business case” for broader deployment of these radar and modeling tools.

Wind’s variability complicates the process. Grid operators, such as MISO (formerly the Midwest Independent Transmission System Operator), are used to dealing with variability in electricity use, which is fairly predictable based on time of day and temperature. But predicting wind generation requires a whole new set of data.

WindLogics has been developing wind forecasting models for more than two decades. The company was founded in St. Paul in 1989 by supercomputer architects, who teamed up with a group of meteorologists to work on various government projects.

As the wind energy industry grew, so did its need for better forecasting data. About a decade ago, WindLogics decided to shift its focus from government to business customers. Today, it’s one of several private firms that supplies tailored forecasts to the industry.

The process starts by pulling in weather forecast models from the National Weather Service and other sources. WindLogics then uses supercomputers to combine all of these forecasts into a single “ensemble,” says Ahlstrom. This aggregated forecast is then run through another set of computer models that contains information about the size and position of its customers’ wind farms.

“They’re down in the range where they’re very valuable when you are trying to operate the grid, even though they are not perfect,” says Ahlstrom.

The methods and technology behind wind forecasting have improved greatly in just the last five to ten years. In the past, someone in a grid control room would simply pull up a weather forecast on the Internet and run a spreadsheet calculation based on wind speed, direction and the number of turbines.

Today, the variables go well beyond wind speed and direction. They include complex factors such as wind “wakes,” the zones immediately behind a spinning turbine where wind speeds dissipate, potentially reducing generation from other turbines. Other atmospheric conditions can predict whether a wind gust will go over or around a hill.

MISO, which manages the grid for the Upper Midwest, started purchasing wind forecasts from a German company in 2008, says Mike McMullen, MISO’s St. Paul regional director. Before then, there just wasn’t enough wind on the system for it to affect generation decisions.

But with nearly 10,000 megawatts of wind capacity installed in MISO’s territory, it’s now a critical piece to track and plan around. At its 24-hour control center in St. Paul, McMullen’s team works facing a 30-foot-wide video board that displays, among other things, a line graph charting recent and forecasted wind generation for a 72-hour period.

“We use that to look ahead so we know what other generation to take offline or put online,” says McMullen. Every five minutes, MISO operators can “re-dispatch,” or adjust the flow of electricity on the grid. Its computers can remotely turn generation up or down at certain plants and re-route electricity to transmission lines where it is needed.

On an afternoon in August, the wind-forecast graph showed that generation had fallen off to about 500 megawatts from 2,500 megawatts the day before. Overnight, however, it was expected to ramp up to about 4,000 megawatts. MISO might hypothetically take that information and ask utilities to turn off a few thousand megawatts worth of fossil fuel generation during those peak wind hours.

The more accurate wind forecasts become, the more comfortable grid operators will be in taking other generation offline. They’ll never be perfect, says Ahlstrom, but even incremental improvements should result in savings for utilities and their customers.

WindLogics received a $1.2 million grant from the Department of Energy last year to work with NOAA on calculating the value of those improvements. Another forecasting firm received a similar grant to study data from an area over Texas, where NOAA has also deployed new models and instruments.

The new technology isn’t cheap — a single radar installation can cost $1 million. In this era of constrained budgets, officials will need all the evidence they can get to support funding. The results of this study will help determine whether there’s a business case for rolling out the improvements nationwide.

“If we can prove that investing in these better weather models and weather data actually saves money on incorporating renewables, then that becomes a good justification for improving the whole weather system,” says Ahlstrom. And those improvements could then benefit a whole range of industries, such as aviation and agriculture.

They might even help keep you dry during your next picnic.