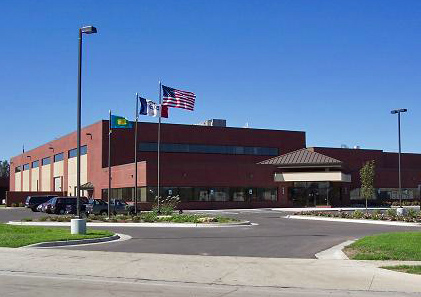 The city of Dubuque, Iowa, wants to install more than 800 solar panels atop its public works building. (Photo via City of Dubuque)

Dubuque, Iowa, prides itself on sustainability and being green, so city leaders thought it would be a great idea to build one of the state’s largest rooftop solar photovoltaic systems on the public works building where they repair city snowplows, garbage trucks and other vehicles.

But the plan was interrupted by a regulatory complication that renewable energy proponents fear could chill solar development in Iowa –- a national leader in wind energy which has so far been slow to embrace solar power — as well as in other states.

Since the city of Dubuque — like all municipalities — is exempt from taxes, it could not utilize the federal and state tax incentives that are crucial to making renewable energy projects financially viable.

So city officials planned to pay a local company, Eagle Point Solar, to install 806 photovoltaic solar panels and basically serve as the middleman with an investor -– a local bank -– which would essentially own the panels and collect the tax credits. Dubuque would then pay Eagle Point for electricity from the solar panels, which would supply about a third of the public works building’s energy needs.

Dubuque officials planned to enter a Power Purchase Agreement, or PPA, with Eagle Point, in which they would pay a set price per kilowatt hour for the electricity from the solar panels. The PPA was approved by the city council after a public comment period. The deal would save Dubuque money, according to city assistant economic development manager Aaron DeJong, and also further its mission of sustainability, especially since it would theoretically be replacing energy generated by nearby coal-fired power plants.

“This was certainly saving on carbon dioxide emissions by buying green power, and it’s good for the community because it’s creating jobs from a local company,” DeJong said.

But Alliant Energy — the investor-owned utility company that serves Dubuque and other parts of Iowa, Minnesota and Wisconsin -– said not so fast.

Lack of clarity in law

As in most states, Iowa utilities are basically guaranteed monopoly rights in their service areas to protect their investments in transmission lines and other infrastructure. But customers are allowed to generate electricity for their own use.

In late August, as installation of the solar panels was set to begin, an Alliant regulatory attorney contacted Dubuque officials saying the PPA with Eagle Point would violate the state law guaranteeing Alliant’s monopoly. Alliant claimed that Eagle Point should be considered a public utility, since the electricity it was selling was not for the company’s own use.

The Database of State Incentives for Renewables and Efficiency (DSIRE) says that at least 21 states and Puerto Rico authorize or allow “third-party solar PV PPAs” of the type Dubuque had planned, including Illinois, Michigan and Ohio. Four states (Georgia, Florida, Kentucky and North Carolina) prohibit or restrict the practice, according to DSIRE, while in other states, including Iowa, there is no clear position.

The Environmental Law and Policy Center (ELPC) wrote a memo outlining why they think Dubuque’s PPA would have complied with Iowa regulations, and more generally why they think third-party PPAs do not violate utilities’ exclusivity rights.

ELPC attorney Bradley Klein, lead author of the memo, said the public works building’s solar panels would be “behind the meter,” meaning they would supply electricity only to that building and would simply reduce the amount of energy it would buy from Alliant, similar to the impact of installing energy-efficient appliances.

Alliant spokesman Justin Foss said the utility supports the idea of solar power in general, and if the city of Dubuque owned the solar panels there would be no problem. But he said the utility considers a PPA between Eagle Point and Dubuque a violation of state regulations, since Eagle Point would technically be selling electricity to the city.

“If someone else is providing electricity, that undermines what we do,” he said. “If they (Eagle Point) supply power to one of our customers, they in fact become the utility. It’s a slippery slope…We can’t support different rules for different customers, it has to be a level playing field.”

Shear said he founded his company about a year ago in hopes of meeting what he sees as growing interest in solar energy in Iowa. Like the ELPC, he hopes regulators or the state legislature make it clear that third-party PPA arrangements are legal and that Alliant agrees to support such arrangements.

“I’m not selling power to the public –- I’m selling power to one user, one building,” said Shear, who said he had to lay off six of his 11 employees after the Dubuque project was stalled. “The renewable energy incentives are critical to reducing the capital cost of the projects. That’s what they were put in there for, to make green energy price-competitive with burning coal or spending billions building nuclear reactors or hundreds of millions on clean coal technology. This is a multi-billion dollar issue in Iowa. It’s an economic development issue, it’s a jobs issue.”

Foss said Alliant wasn’t aware of the pending PPA agreement “until it had started down the path…and we felt like we had to step in.” He said in the future customers should contact their utility before considering such deals.

“We’re kind of the experts on this,” he said.

So far no official legal or administrative action has been taken regarding Dubuque’s project, so the state utility board is not involved in the matter. Klein said future legal action is possible, but for now the ELPC is hoping to “work with Alliant and the (Iowa utility) board in order to resolve this and have a clear pathway for other businesses to grow and develop solar.” His memo cites Iowa State Supreme Court cases and other rulings which he says indicate third party PPAs are legal under existing Iowa regulations and do not make a company such as Eagle Point a “utility.”

“We think third-party PPA financing is an important option for customers to have to finance rooftop solar systems, especially for municipal projects or non-profits or others who don’t have tax liability,” Klein said.

“These PPAs are very popular in states where the solar market is booming -– more and more companies are emerging to take advantage of the financing model, putting more people to work, bringing in more business. We think it’s very important in a state like Iowa that has a lot of solar potential and is at the early stages of solar development to have all the tools available.”

By November, the solar panels will be installed on the Dubuque public works building, Shear said, under a revised plan in which Eagle Point will lease the panels to the city. In this way the electricity generated by the panels will be considered “customer-owned.”

DeJong said the city is satisfied with the leasing arrangement. But Shear said that in general, leasing panels is a much harder sell for tax-exempt customers, since they must agree to a fixed lease rate before they know exactly how much electricity the panels will generate. Under a PPA, the non-profit isn’t significantly affected by fluctuations in generation –- for example during a cloudy month — since they are paying per kilowatt hour of energy received. Shear said the deal with Dubuque would have been 11 cents per kilowatt hour with 3 percent annual increases for 25 years.

“If you can’t do a PPA, the municipalities don’t have the ability to take advantage of the renewable energy incentives and no municipality is going to pay 65 percent more for renewable energy because everyone is under budget crunches,” he said. “Whereas with these incentives, it makes it very affordable and extremely competitive with conventional energy.”