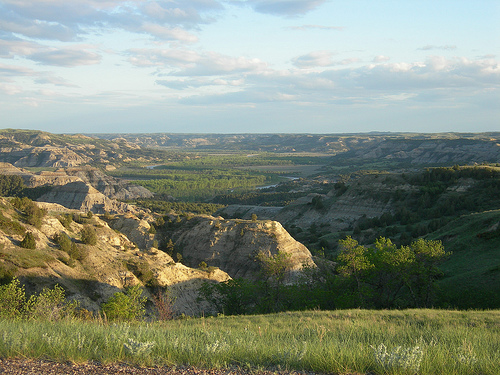 Officials in North Dakota are mounting an increasingly vocal campaign against the Environmental Protection Agency, which they say is pushing air quality controls that won’t work and will burden consumers with higher electricity rates.

At issue is the EPA’s effort to get coal-fired power plants in the state to install new emission controlling technology they say would capture more nitrogen oxide emissions and improve visibility at national parks and other wilderness areas.

Visibility has been reduced by one-half to two-thirds what it would be under natural conditions at national parks and forests in the western United States because of haze-forming particulate matter such as nitrogen oxide and sulfur dioxide, federal officials say. At Theodore Roosevelt National Park, in western North Dakota, the National Park Service says visibility can be reduced from 120 miles in clear conditions to as little as 40 miles.

So, in 1999, the EPA launched the Regional Haze Program, which established a timeline for states to develop plans to improve air quality and restore natural visibility in the country’s national parks and forests by 2064.

Yet as the EPA moves forward with its plans, top North Dakota officials, utility executives and coal industry supporters say the agency is infringing on states’ rights and pushing unproven technology that will drive up utility costs at a time consumers can ill afford it.

While both sides say they hope a resolution can still be found, neither side appears willing to yield ground, and the rhetoric is intensifying.

A difference of opinion

The EPA is pushing the plants to install the former, which they say would reduce nitrogen oxide emissions by up to 90 percent and are common at most new coal-fired power plants.

Officials with the North Dakota Department of Health –- who are in charge of helping the state meet the federal goals –- say they do not believe the systems are compatible with the lignite coal used in North Dakota. The sodium-rich, low-quality coal is damaging to the equipment, and vendors will not guarantee it will work, they say.

State and industry officials also say the air quality in the state is already among the best in the nation -– receiving high marks from the American Lung Association earlier this year –- and that the federal plans will make insignificant improvements compared to the state’s preferred technology, selective non-catalytic reduction systems.

The difference in opinion is also a matter of cost.

Meeting the EPA’s goals could drive up utility retail rates by 20 to 30 percent, according to Kevin Fee, a company spokesman.

Officials at Basin Electric Power Cooperative, which has two units near Stanton, North Dakota, say the EPA’s plans would add another $200 million to the $410 million the company is already spending to meet the state’s emission control plans.

While they say it remains unclear exactly how ratepayers could be impacted, they too anticipate higher energy costs and say such increases could have a devastating impact on the state’s economy.

“Why would we put a cost on consumers, particularly now when we have such economic hardship in the country, when we’re looking at it and saying it’s not going to do anything?” said Mary Klecker-Green, Basin’s supervisor of public and member communications.

EPA officials and their supporters have held firm despite the mounting opposition, saying the emission-control systems North Dakota officials are fighting against will work if properly calibrated and have been proven to work elsewhere, including at three Texas plants. They also say that the costs have been overstated by industry officials.

They are being supported by groups such as the Sierra Club and the National Parks Conservation Association, which have involved themselves in similar debates around the country.

Stephanie Kodish, a Tennessee attorney who works on coal litigation for the NPCA, said industry officials are using scare tactics to make their case. The real issue, she said, is complacency.

“It is improper to think that polluting facilities can operate in an unregulated environment,” she said. “Installing modern pollution controls is simply the cost of doing business.”

Who takes the lead?

The fight taking place in North Dakota is not unique. Officials in Oklahoma, New Mexico and other states have also objected to the EPA’s plans, citing high costs and disagreements about what emission-control technology should be used.

States were to have put forward and had plans to meet the EPA’s air quality goals by 2007, but North Dakota was found to be among 37 states that failed to submit plans addressing the EPA’s requirements in 2009.

Though progress has been made –- state and federal officials now agree on around 75 percent of North Dakota’s plans –- the question over how to limit nitrogen oxide emissions is proving to be a sticking point.

Dave Glatt, the chief of the state Department of Health’s Environmental Health Section, said the state spent four years and more than $1 million studying the issue before coming to the conclusion that the plants should use selective non-catalytic reduction systems.

The EPA, he said, doesn’t understand the nuances of North Dakota’s coal and is pushing a one-size-fits-all approach that will be fought in court if necessary.

For Glatt and other state officials –- the governor and state attorney general have also spoken out against the EPA’s plans –- the issue is as much about states’ rights as it is the technical details of compliance.

“When you look at the Clean Air Act, the intent was that federal government should be in the position to set the standard,” Glatt said. “But they also acknowledged that states were in a position to better understand their local conditions.”

“If we’re not allowed to decide on this issue, what decisions will we be allowed to make?” he said. “This is a state deference issue.”

EPA officials –- who will continue to accept public comments on the issue through the end of November -– say there is clear statutory authority for them to intervene if the state’s plans do not appear to go far enough, however.

They too are willing to do whatever it takes to implement the law, they say.

Officials say it is too soon to predict what will ultimately happen, and that coal is likely to remain a fixture of the state’s energy supply regardless of the cost. North Dakota gets nearly 82 percent of its power from coal, and officials say there aren’t any other baseload alternatives to turn to right now.

Whatever happens, though, coal supporters say their industry is operating in an increasingly hostile regulatory environment.

Steve Van Dyke, a spokesman for the Lignite Energy Council, which represents the state’s mining industry, said that’s unfortunate given the progress the industry has made over the years to improve its environmental record.

The state’s coal production tax –- which brings in about $3 million a year from coal companies –- has helped fund research and development that has improved the industry’s pollution controls, he said.

“I think the industry as a whole feels it’s been a kind of an evolutionary thing, that the plants that were built and came online in the 1970s and ’80s have been improved and modernized,” he said. “So far, it’s something that’s been workable. But this technology just doesn’t work.”

Glatt, of the state Department of Health, remains optimistic despite the disparity between the state and the EPA.

“My hope is that we will come to a resolution with the EPA,” he said. “Obviously we feel that we have a good record, that we have taken a very well thought out and reasoned approach here and that the science backs us up, as does the law.”