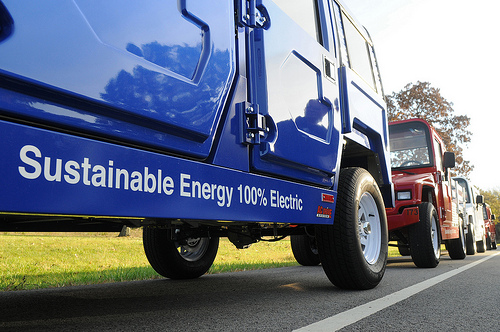 Manufactured by e-Ride Industries in Princeton, the low-speed vehicles can travel between 40 and 45 miles on a single charge and have the same power as a gasoline-powered small pickup.

E-Ride is among the many Midwest firms vying for business from the Department of Defense for good reason. The DOD has become a major federal funder of green projects, with $1.2 billion spent in 2010 alone. It’s also funding research through other initiatives, such as a collaboration with the Department of Energy called the Advanced Research Projects Agency, or ARPA-e.

In fact, the military set up a website, DoD Goes Green, just to track all the activity.

Every service branch is participating in green energy procurement and research, according to Phyllis Cuttino of the Pew Project on National Security Energy and Climate.

The Pentagon’s continued support of greener energy is a potential game-changer because of its enormity. The military spends more than $400 billion on goods and services every year, a good portion of it on new technology.

And it has an enviable record of invention ranging from electronics to computing (the Internet was originally a military project), space technology to to satellites, nuclear energy to GPS. Could it do for sustainability what it did space and cyberspace?

“Innovation is not all located in California or Massachusetts,” she said.

The DoD uses a lot of energy, and its leaders know it. The military consumes 300,000 barrels of oil a day, much of it transported by convoys vulnerable to attack –- more than 1,100 were attacked last year alone in Iraq and Afghanistan, leading to more 3,000 injuries and deaths, said Cuttino.

A typical soldier in battle uses 22 gallons of oil a day, a 174 percent increase over the Vietnam War.

“They have all these problems with costs, with volatility, with operational risks,” she said. “What DoD has said to itself is we have to re-examine the way we approach energy.”

The sheer magnitude of the DoD’s operations begs for more energy conservation. The military has 500 sites containing 500,000 buildings, three times as many structures as Walmart manages. Many large bases had one power meter that would collectively measure all energy use rather than metering individual buildings, she said.

The military buys most of its electricity from utility companies today but the Pew report suggests in the future, bases could become self-sustaining “microgrids” powered by renewable energy.

In all, the military has more than 450 projects involving wind, geothermal, biomass and solar energy, the report noted. Those projects helped the military draw 9.6 percent of its power from renewable sources.

The Midwest steps up

To that end, retired U.S. Navy officer Chip Laingen runs the Small Business Administration’s Advanced Power and Energy Cluster (APEC) in Minneapolis. He’s has been working in Minnesota and the Dakotas with a number of small companies looking to land military contracts.

The APEC is part of the Defense Alliance, which focuses on attracting DoD contracts in a variety of fields, not just energy. So far the APEC has helped companies land $6.6 million in contracts, creating more than 140 full- and part-time positions.

A couple of roadblocks Laingen sees for the Upper Midwest is the reality of being in “flyover territory” and a general apprehension with being involved in military projects.

“Some people don’t believe the military cares about this (renewable energy) stuff, but the smart ones look at the military’s investment and say ‘wow, there’s that much money there?'” he says.

The DoD will spend $3 billion on renewables by 2015 and $10 billion by 2030. Meanwhile, the money has flown steadily to improving bases throughout the country and in the Midwest.

In Minneapolis, the 934th Airlift Wing retrofitted its entire base to reduce carbon emissions and save energy. The 148th Fighter Wing in Duluth installed five wind turbine generators and the Arden Hills Army Training Site set a goal to reduce energy use by 30 percent through district heating, solar thermal and solar electric systems.

Similar projects have been undertaken at bases in Ohio, Indiana and Michigan.

In Wisconsin, Eaton Corp., along with the University of Wisconsin and ZBB Energy Corp., is working on a microgrid project for the Fort Sill, Okla. Army base. ZBB is also involved in an energy storage system to be installed at a naval base near Los Angeles.

Virent, a 110-person firm in Madison, has a good chance at landing a contract with the Navy to help build $510 million of biorefineries for biofuel production. Helios Solar Works, Inc., based in Milwaukee, will be supplying solar panels to the Army under a contract with Arista Power of New York.

The battery company Dow Kokam -– a partnership of Dow Chemical, TK Advanced Battery, LLC and Groupe Industriel Marcel Dassault (Dassault) -– is building a plant that will employ 800 people in Midland, Michigan, funded in part by a $161 million Department of Energy grant. Batteries produced there and in Lee’s Summit, Missouri, will be used by the military for aerospace and land-based operations.

At e-Ride there’s a sense of optimism based on the potential for more sales as the entire federal government — and not just the DoD — goes green. Erik Crawford, who leads up federal sales, said the U.S. Postal Service is doing a pilot with e-Ride now that could result in significant sales.

The reason for the interest of the postal service and the DoD is that e-Ride’s vehicles are not simply glorified golf carts but instead have the characteristics of small pickup trucks.  Kevin Bauerly, e-Ride’s general manager, said that e-Ride “is in general cheaper than traditional small pickups” and cost less to operate over the lifecycle of the vehicles.

The vehicles have even been used at the McMurdo research station in Antarctica.

So far federal sales have been a small part of e-Ride’s revenue, an issue that could change dramatically, and quickly.

“Our concern is growing too quickly, because the deals we’re in the running for pale compared to the company’s previous sales by quite a bit,” Crawford pointed out. “They could double the size of the company very rapidly.”