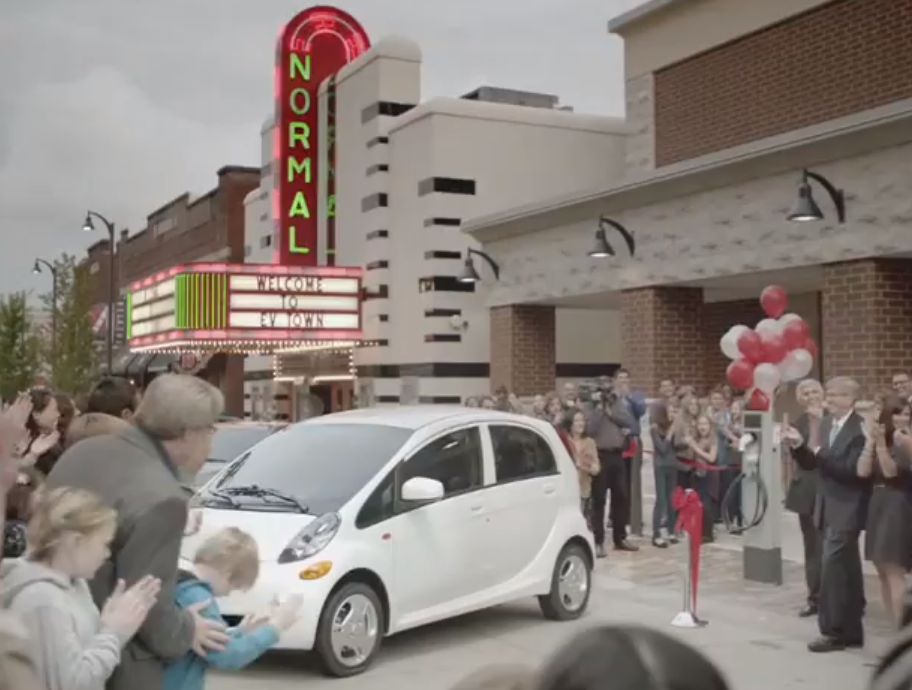 Normal, Illinois, is home to Mitsubishi’s only U.S. manufacturing plant, and residents of the town 130 miles southwest of Chicago are known for embracing sustainability and renewable energy. Many families have two incomes and two cars, and “are very educated and early adopters of technology,” in the words of Mayor Chris Koos.

So about a year ago, Koos and other civic leaders decided to dub Normal and its adjacent “sister city,” Bloomington, “EVTown” and ask Mitsubishi to make it among the early destinations for its new all-electric car, the i-MiEV.

As typically happens with electric and hybrid cars, Mistubishi will roll out the i-MiEV in larger coastal markets first. Drivers in smaller towns, especially in the Midwest, will have to wait many months longer than urbanites to buy an electric vehicle or hybrid from their local dealer. Normal town planner Mercy Davison said locals were disappointed in how long they had to wait for the Nissan Leaf.

So Mitsubishi agreed to dedicate up to 1,000 i-MiEVs for Bloomington-Normal drivers. With a combined population of about 130,000, that would mean a considerably high proportion of families buying new i-MiEVs.

Since January, Normal has been leasing two i-MiEVs made for the European market, which differ somewhat from the U.S. version to be released in 2012. Davison and other staff began driving the cars – decorated with the EVTown logo — in parades and taking them to public events to stoke enthusiasm “and show people it’s a real car, not a golf cart,” as Davison said. On a recent evening she was headed to a meeting of the renewable energy club at Illinois State University, where students were eager to test drive the car. She’s also showed the i-MiEV off at antique car clubs, schools and civic federations.

“It’s been all over the place,” she said, noting that the EVTown campaign promotes electric and hybrid vehicles in general, not solely the i-MiEV.

One of them is Gregory Rackauskas, a dentist who had been admiring the city’s demo i-MiEV from his office next to city hall.

“They gave me the keys for a few days and said, ‘Have a good time,’” said Rackauskas, who expects his pearl i-MiEV with “all the amenities” to arrive in March.

“I’ll never have to stand at a gas station in the middle of winter with my feet in the snow again,” he said. “Or getting an oil change, sitting there looking at the dirty coffee pot and the stained chairs – guess what, I’ll never have to do that again!”

So far about 50 residents have ordered the i-MiEV, according to Mitsubishi spokesman Dan Irvin, and the town is getting six or seven for its fleet, including a mayoral car for Koos and vehicles for parking enforcement and other departments. The town vehicles are slated to arrive in January and the private ones in the spring.

Though Mitsubishi has not announced exactly where and when i-MiEVs will be released nationwide, Irvin said the EVTown program means locals will be able to get the cars about three to six months earlier than residents of similar-sized Midwestern towns.

The city has already installed five charging stations – two at city hall and three on a public parking deck. The headquarters of a local bank has also installed a station, and Davison expects to see more businesses follow suit. Mitsubishi is not involved in locating charging stations in Bloomington-Normal, though Irvin said they plan to install one at the manufacturing plant.

The public charging stations will be free for the near future, with a fee possible later on. The EVTown website notes that even when people pay for charging, compared to gasoline, one could expect to save $5,400 over eight years driving a total of 64,000 miles. Koos also expects the city to save money thanks to lower maintenance costs on its fleet.

Along with meeting town sustainability goals and demand from local residents, Davison said civic leaders ultimately hope Mitsubishi will eventually manufacture electric cars in Bloomington-Normal, where the existing plant employs about 1,200 local residents. Irvin said demand for i-MiEVs can be met by the company’s Japanese operations, and they don’t have any plans for making the car in the U.S.

Despite its name, Normal is not exactly a typical “Anytown.” Due in part to the Mitsubishi plant along with two local universities and hospitals, its residents have more education and higher incomes than those in many small cities and towns. But Koos said the enthusiasm over electric vehicles in Bloomington-Normal shows people across the country – “not just in Madison or Boulder or Austin” — are likely to embrace electric vehicles.

“As much as we like to think we’re very much into sustainability in this community, and we probably are compared to a lot of Midwestern places, it’s not like Berkeley where people will buy a car purely because it’s good for the planet,” Davison said. “People love the technology, it’s cool, it’s a great ride, and you’re not blowing a ton of money on gas.  You show people the numbers – that’s why they will buy it.”
Kari Lydersen is a Chicago-based freelancer and author whose work appears in The Washington Post, The New York Times and other outlets.