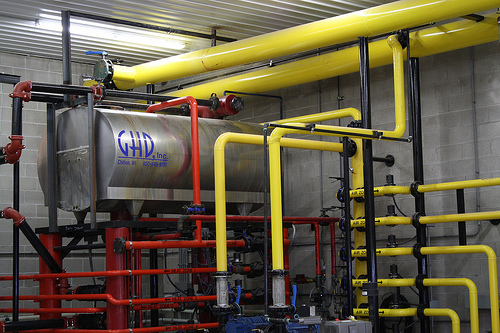 Biodigesters, like this one at a dairy farm in Wisconsin, are a major part of the ag industry's renewable energy efforts. (Photo via USDA)

When Dave Pagoria looked at the list of expenses associated with his 40-acre apple orchard and pumpkin farm in rural Wisconsin, there was one item that stood out: Energy.

No other cost, he reasoned, offered more variability and uncertainty over the long-term.

His solution: a 13.3-kilowatt solar energy system. Installed in July 2010, the system provided around 73 percent of the energy used at his farm during its first year in use, said Pagoria, the owner of Helene’s Hilltop Orchard near Merrill.

Pagoria expects to recoup his investment in the system within four years, and is reassured by the fact that he faces much more stable energy costs going forward.

But the solar panels, which cost $78,000, may never have gone up at all, he says, without the help of a grant he obtained through the United States Department of Agriculture.

The USDA’s Rural Energy for American Program – in addition to solar energy tax credits and a complementary state grant – allowed Pagoria to cover all but $14,287 of the system. The remaining amount was paid for through personal savings.

“I looked at the price of energy, saw the variation and the spikes, and saw this as something I could do about it,” Pagoria said in an interview from the orchard. “But there’s no way I could have done it without the grants.”

Stories like Pagoria’s may become less common if the USDA-run grant program, also known as REAP, is slashed amid an effort to trim billions from the 2012 farm bill, the massive federal legislation that shapes agricultural policy.

Officials are still debating funding levels, but proponents fear the program may be sliced nearly in half, from $75 million in the 2011 fiscal year to $38.5 million in 2012. The cuts would follow a 25 percent reduction between 2011 and 2010.

Program advocates say such cuts could choke efforts to incorporate renewable energy into the rural economy, leave valuable private investments on the table and leave farmers without the kind of certainty that Pagoria now finds so comforting.

“Frankly, these investments that the USDA makes create more viable businesses in rural America,” said Bill Menner, the director of the USDA’s Rural Development program in Iowa. “In the end, it all comes down to dollars and cents.”

Money is given in both the form of loan guarantees and outright grants, and is considered the only comprehensive renewable energy program aimed specifically at the agricultural industry.

And although the program started small – $21.7 million went to 114 projects during the first year – it has rapidly grown in popularity. During the 2011 fiscal year, there were 2,008 awards made totaling approximately $96.5 million in grants and loan guarantees, according to the USDA. The latest round of awards was announced Wednesday.

Over the life of the program, the USDA has awarded over $340 million in grants and $210 million in loan guarantees to more than 7,750 projects.

Though proponents are careful to say the program has a broad appeal – with projects in each state in the country – the Midwest has obtained a lion’s share of the money.

And perhaps no other state has been as aggressive in pursuing REAP grants than Iowa, which has received more than 1,300 awards totaling $136.9 million in grants and loan guarantees since the program was created. The state has routinely used its allotted amount and captured unspent money from other states, accounting for as much as 40 percent of the awards given out nationally during peak years.

Officials in Iowa say that history is due in part to the fact that they have made concerted efforts to advertise the program.

“This was a very small program when it very first started up, but we went out and promoted it and in recent years it has just exploded,” said Menner, the Rural Development director in Iowa.

One of the main focuses in Iowa has been helping farmers replace antiquated, propane-intensive grain drying machinery with more efficient technology. Other projects in the region have included wood-fired boilers, flex-fuel pumping stations, geothermal systems and wind turbines.

One of the largest users of the REAP program is the dairy industry, which has pledged to reduce greenhouse gas emissions by 25 percent by 2020.

The industry’s main tool: anaerobic digesters, which store manure, separate liquid from solid and capture methane to produce electricity. In the 2011 fiscal year, the USDA distributed nearly $21 million for digesters around the country.

The awards included a $500,000 grant and $1.3 million guaranteed loan for a soon-to-be-installed system at the Heller farm near Alma Center, Wisconsin, which houses around 1,200 dairy cows. The system is estimated to generate 3.3 million kilowatt hours of renewable energy each year, which officials say is enough to power 400 average Wisconsin homes.

Blake Heller, the owner of the 48-year-old farm, said he had looked into the system for years, but could never have afforded it on his own. Heller said his farm won’t just benefit from selling back into the grid –Xcel Energy is purchasing the power – but also because it will eliminate the need to haul waste from the farm.

The farm uses sand bedding now, which requires five dump trucks to come to the farm six times a year, working three days straight, to haul all the waste, Heller said. Now, the solids will be spread on the feed crops Heller grows, and the liquid will be sent to a manure pit.

“It creates a hell of an efficiency not having to haul the manure out of here,” Heller said. “Producing energy isn’t the main point. The main point is to improve operations and lower expenses.”

REAP advocates acknowledge such projects may be pursued without government support, particularly if the cost of renewable energy comes down, and some are already preparing for less money.

The dairy industry, for example, is promoting anaerobic digesters to utilities and encouraging them to invest as third-party owners of the systems. There are less than 200 such systems around the country now, but officials hope to have more than 1,300 installed within the next decade in an effort to meet their carbon-reduction goals.

“We’re not going to get to that number by relying on USDA loans and grants,” said Jerry Bingold, the director of renewable energy for Dairy Management Inc., which markets and builds support for the dairy industry. “We’ve anticipated this. This is really not a surprise.”

Bingold said the program was useful in showing the private sector such systems, around since the late 1970s, could work, however.

And while wind, solar and geothermal technologies could also attract private investment, proponents say renewables are still at a disadvantage compared to fossil fuels and that more government investment is needed.

“Some of these projects will still get done, it’s just a function of how much,” said Andy Olsen, a senior policy advocate for the Environmental Law & Policy Center, a Midwest-based public interest group that advocated for the program at its inception and is lobbying for more support now (ELPC is a member of the RE-AMP network, which funds Midwest Energy News).

“It’s very necessary for the government to be involved because the public subsidy that is the use of fossil fuels continues unabated,” Olsen added. “So long as we still have an economic system that fails to account for the cost to our society than we need to address that market failure.”

There are signs that farmers and small businesses are increasingly interested in going green, too.

Of those who applied for funding in 2011, 42 percent were denied, according to the USDA.

“This program has been a real boon to the agricultural industry,” said Llloyd Ritter, the co-director of the Ag Energy Coalition, a new group of 50 organizations dedicated to maintaining support for clean energy in the new farm bill. “There’s no way to mince words – it’s going to be a big loss if this program is diminished.”

“I don’t think there’s any question that without REAP there are going to be less projects getting done,” he said.

Ritter, who helped author the bill while working for U.S. Sen. Tom Harkin, D-Iowa, said he the coming weeks will be critical to determining the fate of the program. The House and Senate are still hashing out a compromise, and details remain sparse, but a deficit-reduction plan is expected to be released by Nov. 23.

Agricultural Secretary Tom Vilsack has expressed his support, and more lawmakers are coming around as they learn more about the program, the situation remains “harrowing,” he said.

“It (REAP) really doesn’t have many detractors,” Ritter said. “It’s just a question of where the money comes from at this moment in time.”

Editor’s note: Jerry Bingold’s name was misspelled in an earlier version of this story.

CORRECTION: An earlier version of this story incorrectly stated that REAP funds must be spent on projects that are directly related to food production and included an incorrect total amount awarded by the program.