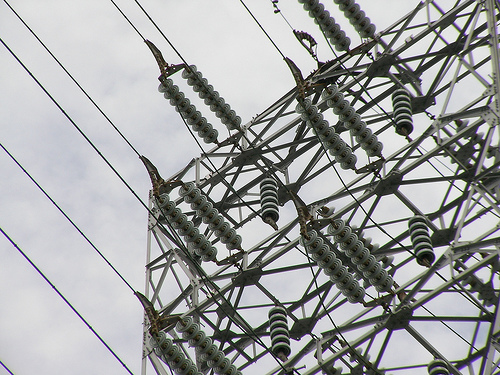 Over the next year Naperville, outside Chicago, will become the first large town in the Midwest to have smart meters in all 57,000 homes and commercial buildings.

Those meters will transmit data to the city’s municipal power company every 15 minutes and eventually allow for two way communication between residents and their home heating and cooling systems.

“Next year we’ll begin to offer time-of use rates for the customers, and we think that’s going to be good,” says Mark Curran, who leads the city’s smart grid project. “The way it’s set up, customers will have an e-portal online and they’ll be able to see their power usage the past day or over the past three or four years. With programmable thermostats they can use an iPhone app to leave their temperature in summer up a few degrees and then cool it down before they get home.”

Those are just a few advantages of the rapidly growing field of “smart grid” technology, which promises everything from more efficient power lines and increased capacity for renewable energy to consumer empowerment and new market pricing mechanisms. The Department of Energy’s Office of Electricity Delivery and Energy Reliability manages a $3.4 billion budget of the Smart Grid Investment Grant program.

And with the nation’s electrical structure aging, more opportunities to employ this new technology are emerging.

A stronger grid could create 200,000 jobs around the country and make for a much more efficient energy system, according to Massoud Amin, director of the Technological Leadership Institute at the University of Minnesota. Amin is a highly regarded expert on the topic — he was dubbed the “father of smart grid” by the American Society of Mechanical Engineers in 2011.

Dr. Massoud Amin of the University of Minnesota gives a smart grid presentation in 2009. (Photo by Ed Yourdon via Creative Commons)

A “stronger” and “smarter” grid could save up to $70 billion each year through reduced outages and increased efficiency. Emissions of all particulates, as well as carbon dioxide, would drop 12 to 18 percent a year, predicted Amin, when compared to emissions created by the current grid.

“From every angle – reduction of cost of outages, integration of renewables, by increasing the overall system efficiency, reducing CO2 emissions – smart grid makes sense and we must do it,” said Amin. “We must find ways to push it forward.”

Not that it’s going to be cheap. A smart grid covering the country will cost from $340 billion to $480 billion over 20 years, said Amin.

“That’s sensors, communication and control devices, and that includes electrification of transportation devices,” he said. Another 42,000 miles of new high voltage lines will cost $85 billion, but will be capable of managing 40 percent of the country’s transmission needs.

But Amin says every $2 investment in smart grid will result in $6 in new spending in the economy. And now is the time to act on a smart grid, he argues, because electricity use is growing slowly at no more than 1 percent a year, offering a window of opportunity.

“The good news is demand has been growing slowly – it was 10 percent in the 1950s, 2.5 percent in the 90s, and in the last decade as a consequence of the economic slowdown we have been at 1 percent growth a year,” he said. New smart grid technologies, he added, could make better use of current generating capacity, eliminating some of the need for new power plants.

Progress on smart grid in the Midwest is starting to move at a rapid pace, no more so than in Illinois, where the state legislature and Gov. Pat Quinn have been in a vitriolic dogfight over a new $3.2 billion energy law. Passed by veto-proof majorities in late October, the legislation will help Commonwealth Edison and other Illinois utilities pay for smart meters and improvements to the electrical grid.

Quinn vows to fight the measure due to rate increases the utilities built into the law. But many proponents see it as a far-sighted measure that could move Illinois into the forefront of research and in attracting businesses in the nascent field.

“This is a very large-scale implementation of smart grid — it will be the largest deployment in the world,” said Andrew Barbeau, managing director of the Robert W. Galvin Center for Electricity Innovation at the Illinois Institute of Technology.

The smart grid legislation and Chicago’s focus on sustainable technology are reasons why the Windy City has managed to attract more than 125 clean tech companies who have formed the Illinois Smart Grid Regional Innovation Cluster at IIT.

IIT itself has become a laboratory of innovation for smart grid by teaming with Galvin Electricity Initiative and the DOE on a project called “The Perfect Power System.” Billed as the first energy distribution system of its kind in the country, the $12 million project is expected to pay for itself in the first five years.

The “System” creates microgrids throughout the campus bolstered by intelligent system controllers and recovery mechanisms that eliminate the need for a new substation and $2 million of upgrades. If one section of the grid fails, power from another microgrid will be shifted automatically.

IIT’s approach plans to employ smart grid on an existing system, but that same technology is part of most new grid expansion projects, too. Great River Energy’s CapX2020, for example, will span 710 miles from the Dakotas to Wisconsin, adding capacity and allowing for more wind power in the Dakotas and Minnesota to reach more populated areas further east.

Sponsored by 11 utilities who are members of the cooperative, the $1.7 billion project is mainly focused not on smart grid but on adding a new network of high voltage lines. But those lines include sensors, fiber optics and other smart grid technologies.

The project uses trapezoid-shaped lines capable of transmitting 60 percent more electricity than older lines, said Jared Alholinna, regional transmission planning strategist for Great River. The lines will have shields above them to carry fiber optics and protect them from the elements, he said.

If the system fails, power companies can much more quickly determine where and what went wrong through sensors connected to the lines, he said.

No lines are being replaced, he added. “We’re not really replacing anything, we’re making enhancements to the transmission system.”

Not a Star Trek weapon

MISO, which oversees the Midwest grid, rolled out in 2010 a new measurement device called synchrophasors that will be placed in more than 165 different spots within the organization’s 13-state region. The three-year, $34.5 million project, funded in part by the Department of Energy, installs synchrophasors in areas of congestion on the grid.

Chiefly, the synchropasors offer real-time – three times a second — snapshots of the grid, allowing operators to anticipate problems much faster than in the past, says David Zwergel, senior director of regional operations. After power outages occur, operators will be able “to analyze the sequence of events and understand what happened, what was the chain of events.”

With that information, MISO’s members can better design and tweak the grid to make it more likely to withstand challenging circumstances. Just as importantly, the program will bring greater efficiency and “free up room on the transmission system, allowing more wind integration, allowing the most economic generation to run at a given moment,” he says.

MISO’s members will have more accurate information that can allow them to potentially push more power and operate more closely to the grid’s absolute limit, he says. So far there more than 44 synchrophasors installed, with many more on the way, said Zwergel.

“We’re hoping to mature the synchrophasor technology in the grid operations and continue adding measurement devices to realize its benefits,” he said.

In Illinois, meanwhile, the political dogfight remains in the spotlight even as Naperville’s $22 million smart grid program, paid for by federal funds and city’s electric utility, moves forward. The city’s electric company even plans to pay customers to allow it to program their thermostats to raise or lower their temperature during peak demand times.

It’s also planning to train customers on when to recharge electric cars as they grow in popularity.

Smart grid on a wider footprint than Naperville could change the energy equation.

“If we can shave a few percentage points off what our companies produce you would save the equivalent of what a nuclear plant generates,” said Curran. “But this isn’t going to happen overnight.”

Photo by ume-y via Creative Commons