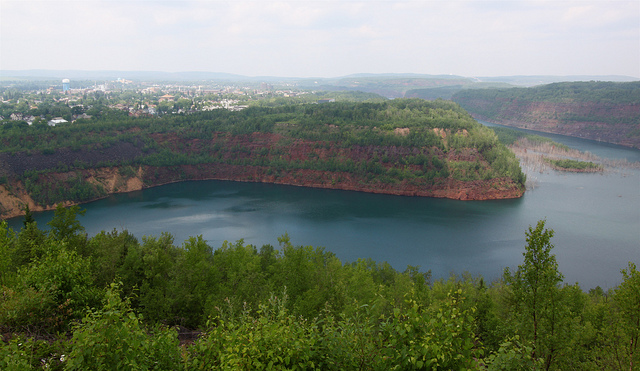 Minnesota researchers may have unearthed a new use for abandoned mining pits on the state’s Iron Range: Wind power storage.

A team at the University of Minnesota-Duluth’s Natural Resources Research Institute spent the past year studying whether former open-pit mines might be repurposed as storage facilities for off-peak wind energy. The results appear to be promising, they said.

The concept has the interest and backing of two Minnesota utilities, which helped fund the research. The utilities hope it could someday help them get more value from wind investments as they work toward meeting higher targets for the state’s renewable portfolio standard.

“It’s very difficult to manage [wind] without some kind of storage capability, and that’s where this type of project fits in,” says Don Fosnacht, the study’s lead investigator and director of the institute’s Center for Applied Research and Technology Development.

The report specifically looks at using iron ore mining pits for pumped storage hydropower. It’s one of the oldest and most widely used methods for storing energy. Cheap or excess electricity, such as nighttime wind power, is used to pump water uphill from a lake or reservoir into a higher-elevation holding pond. When electricity demand is higher, the energy is recaptured by reversing the flow and sending water through hydro turbines on its way back down.

The earliest pumped-hydro systems were built in Italy and Switzerland in the 1890s. Today, there’s 125 gigawatts of pumped-hydro capacity worldwide, a little less than one-fifth of which is in the United States.

Most of the 40 or so U.S. pumped-hydro facilities were built over the course of a few decades beginning in the 1960s to help coal or nuclear plants run at a constant rate, which is more efficient, rather than ramping up and down to meet demand.

There’s now renewed interest in it as a solution for managing the variability of wind and solar power. In September, federal energy officials announced $17 million in research and development funding for hydropower, including $6.8 million for pumped storage hydropower. The Federal Energy Regulatory Commission has issued preliminary permits for nearly 32,000 megawatts worth of proposed new pumped-hydro capacity, including projects in Ohio, Illinois and Minnesota.

“The driver is wind integration,” said Rick Miller, who leads the hydropower practice for Omaha-based engineering consulting firm HDR. Wind often picks up at night, when electricity demand is lower. Pumped-hydro would allow utilities to store that energy until the next day, when more customers need it and it’s less likely to go to waste.

‘Potential is certainly there’

As part of the study, University of Minnesota researchers visited one of the nearest pumped-hydro facilities, the Ludington Pumped Storage Plant on Lake Michigan. Consumers Energy and Detroit Edison built the plant to balance loads from nearby nuclear power plants. When it was completed in 1973, it was the world’s largest pumped-storage hydropower plant, holding 27 billion gallons of water and generating up to 1,872 megawatts.

Missouri has three smaller hydro-storage plants operated by Ameren and the U.S. Army Corps of Engineers. But pumped-hydro isn’t found in most of the Midwest, in part because the steep elevation changes that are necessary are harder to find on the plains.

On the Iron Range, “the potential is certainly there, based on our study,” Fosnacht said. The Laurentian continental divide crosses the region, which slopes down from there several hundred feet to Lake Superior. Its topography is also pocked by just over 100 iron ore pits that were mined to varying degrees during the last century. Some are still used in taconite mining operations, but many are abandoned and have since filled with rain water.

A pumped-hydro energy storage system is basically two reservoirs with pumping and generation equipment and an elevation change in between. An abandoned mining pit next to a cliff or ridge would, in a sense, be partially built already, which could lower the construction costs. The projects would involved excavating a second holding pond, likely above an existing mining pit reservoir.

Besides cost savings, Fosnacht said another potential advantage to using abandoned mining pits is that it may lessen environmental opposition, which has gotten in the way of other pumped-hydro projects. The pits are on land that’s already been altered by decades of mining. Mineral erosion is a risk, but a closed-loop system could be achieved with the right design, he said.

It’s also a relatively efficient technology, Fosnacht said. For every 100 megawatts used in pumping water uphill, a plant can generate about 85 megawatts from releasing the same flow back downhill. And because they can be turned on in a matter of minutes, they give grid operators an alternative to firing up dirty and expensive oil or gas peaking plants.

Minnesota Power and Great River Energy have spent millions purchasing wind power contracts in recent years. The problem is that when they sell that energy onto the grid on windy nights, they often get only a fraction of what they paid for it. They’re interested in ways to store that off-peak power until it’s in greater demand and they can get a better rate, making wind power more economical.

“We started to ask the question whether there are any synergies we could leverage in our region,” says Al Rudeck, vice president of strategy, planning and asset optimization for Minnesota Power. The utility is the largest hydropower operator in the state, and its largest customers are mining companies, which lead to the question: “Could we marry mining and pump storage with the idea of storing wind?”

Minnesota Power approached Great River Energy and then the Natural Resources Research Institute about collaborating on a study. The University’s Institute on the Environment also helped fund the $250,000, one-year project looking at the policy, topography and environmental considerations. The final report is expected to be published this month.

One concern the report will point out is the importance of finding a site where mining isn’t likely to reoccur in the future. Renewed interest in mining caused by the rise in certain commodity prices might mean mineral rights could get in the way.

While the study found about half a dozen sites that seem to have the right physical conditions for developing pumped-hydro energy storage, economics will ultimately determine whether the idea advances.

Miller, of HDR, said financing, along with misunderstanding about the environmental impact, are the two biggest barriers for pumped hydro projects. A 1,000-megawatt plant, in general, can cost around $2 billion to build. Starting with existing pits will lower costs, but “there’s still a lot of money in the equipment and drilling your tunnels,” Miller said.

Fosnacht said he thinks a 100-megawatt mining-pit system could be built be built for around $120 million, although that is just a rough estimate.

An important factor for financing the project would be price differential between daytime and nighttime electricity. The larger that spread, the more value the utilities would get from building storage capacity. Officials with both companies said it’s too soon to say whether or when they will pursue a project, though Rudeck said it would likely not be until after 2020.

“We’re definitely very anxious to see the results of the study,” Rudeck said. “The technology is there. It’s just a question whether the right site is there and the right economics for it to make sense.”