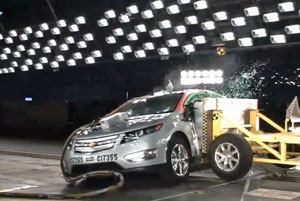 For electric vehicle proponents, the timing couldn’t be worse.

With the extended-range hybrid Chevrolet Volt and all-electric Nissan Leaf finally available in all 50 states and a host of new plug-in hybrids and all-electrics ready for launch in 2012, the National Highway Traffic Safety Administration (NHTSA) has announced that it is opening a “preliminary evaluation” of the Volt’s battery assemblies.

NHTSA’s concern stems from a fire in June that started in a Chevrolet Volt sitting in a storage lot, three weeks after the vehicle had been evaluated in a side pole crash test. The source of the fire was the Volt’s 400-pound T-shaped battery pack that holds more than 200 individual lithium ion cells.

Subsequent impact tests of just the Volt’s battery pack produced a fire a week after impact damage to one pack, a temperature increase from another pack one day after it was damaged, and sparks and smoke from a third pack.

The announcement has led to a surge in media coverage questioning the safety of battery-powered vehicles. The New York Times recently declared the news  “a setback for electric cars,” while Fox News has gone as far as to declare the Volt an “utter disaster.”

However, while there are as many as 287,000 vehicle fires in the U.S. each year, General Motors points out that there have been no “real world” fires caused by the Chevrolet Volt.

“The Volt is a five-star safety car. Even though no customer has experienced in the real world what was identified in this latest testing of post-crash situations, we’re taking critical steps to ensure customer satisfaction and safety,” said GM’s North American President Mark Reuss in a written statement. GM sent a letter to all Chevrolet Volt owners on November 28, assuring them that their cars are safe and offering to provide a replacement GM vehicle for owners to drive “until this issue is resolved.”

The NHTSA also said in a statement that Volt owners who haven’t been in a major crash “do not have reason for concern,” and the Detroit Free Press reports that Volt owners don’t seem to be nearly as concerned about the fires as the media is.

So what’s all the hype about? Do electric cars really post a fire hazard?

To answer that question, we need to take a closer look at battery chemistry.

Not all batteries created equal

Lithium-ion batteries have become a prime mover of our wired and interconnected society ever since Sony developed them in 1991.  They can carry six times the energy of old-fashioned lead-acid batteries and have three times the energy density of nickel metal hydride (NiMH) batteries like those in the Toyota Prius hybrid.

Containing all of that power, however, requires a certain amount of care when it comes to manufacturing, transporting, handling, charging and discharging these technical marvels. Get it wrong, and the magic can quickly escape from the bottle.

Although it is too early in the investigation for NHTSA or GM to report on exactly what is happening to the Chevrolet Volt’s battery pack, the mechanisms by which individual lithium ion cells can catch fire are well understood.

All batteries have negatively and positively charged terminals immersed in an electrolyte. When a battery is charged, an electrochemical reaction leaves an excess of electrons at the negative terminal.

When a battery is connected to a device such as an electric motor, electrons flow from the negative terminal, through wires to the device and back to the positive pole of the battery, where they recombine with positively charged ions that have traveled through the electrolyte to the positive terminal. In lower-energy batteries like lead acid or nickel metal hydride, the electrolyte is water-based and cannot catch fire.

However, because lithium compounds react with water, the electrolyte used in a lithium ion battery cannot be water-based. Instead, the electrolyte is an organic compound that happens to be extremely flammable.

Because lithium ion batteries are compact, the positive and negative poles must be kept apart by a permeable plastic separator. Early lithium ion laptop batteries could catch fire when impurities floating in the electrolyte damaged the separator, allowing electrons to flow from the negative to the positive poles and causing an internal short.

In the worst cases, this short would heat the battery, melting the separator and causing thermal runaway that would cause the electrolyte in the battery to catch fire. Critics of electric cars have been quick to point to Sony’s recall of millions of lithium ion laptop computer batteries in 2006-2007 after some fires were started by the compact high energy cells.

It is important to note that while lithium metal itself is highly reactive (it will spontaneously burst into flames if placed in water), there is no elemental lithium metal in a lithium ion battery, and the lithium compounds in the cell are not particularly flammable. It is the organic electrolyte, the plastic internal separator, and the carbon-based negative terminal that provide fuel for a fire. Once one cell has undergone thermal runaway, the chances are good that it will overheat adjacent cells, eventually causing a fire.

Volt’s gas tank drained, but not the battery

It isn’t just manufacturing defects that can compromise the integrity of the internal separators. In a July 2011 report (PDF), the Fire Protection Research Foundation found that damage to individual cells or packs of cells could result in internal damage that could result in a fire, and recommends that if physical damage is suspected the batteries should be quarantined and monitored for evidence of cell internal shorting.

The report also noted that the state of charge of a lithium-ion battery had a big effect on the chances of thermal runaway within the cell: cells with a low state of charge were unlikely to experience the kind of runaway that could lead to a fire.

That’s why GM recommends that the electric energy be drained from the Volt’s battery after a crash, something that was not done following NHTSA’s crash test in May that resulted in the June fire three weeks later (the NHTSA did, however, drain the Volt’s gasoline tank, as is standard procedure for all cars).

The Fire Protection Research Foundation study also noted that the fires caused by lithium ion cells are fed by the flammable electrolyte and plastic separator and packaging, and that both the Federal Aviation Administration (FAA) and the U.S. Navy recommend the use of water for fire suppression with lithium ion batteries.

The exact chemistry of lithium ion cells varies between battery manufacturers and can be a factor in how well the batteries will withstand abuse. The nickel-manganese-cobalt, or NMC chemistry used by Korea-based LG Chem for the Chevrolet Volt battery is fairly standard within the industry.  Michigan-based A123’s lithium iron phosphate cell chemistry is considered by industry experts to be “safer” than the cobalt-based cells. Chevrolet has chosen A123’s batteries for its upcoming all-electric subcompact Spark, and A123 cells can be found in the newly launched Fisker Karma plug-in hybrid.

Unfortunately, it isn’t the first time that GM has been under investigation for fires caused by side-impacts. GMC and Chevrolet pickup trucks built between 1973 and 1987 had “side-saddle” gas tanks, mounted outside the frame, which could rupture in heavy side crashes. In court cases resulting from numerous lawsuits it was clear that GM knew of the problems with its vehicles, but was reluctant to make costly changes to its designs.

Meanwhile, the Volt and the Leaf will be joined by more than a dozen new plug-in hybrids and all electric vehicles that will hit the North American market in 2012, all of them powered by some version of the lithium ion battery.

While the issues with the Volt’s battery raises some concerns, the bigger question for the automotive industry is developing proper protocols, standards and procedures for electric vehicles.

“We’re already leading a joint electric vehicle activity with the Society of Automotive Engineers and other automotive companies to address new issues, such as this protocol of depowering batteries after a severe crash.”