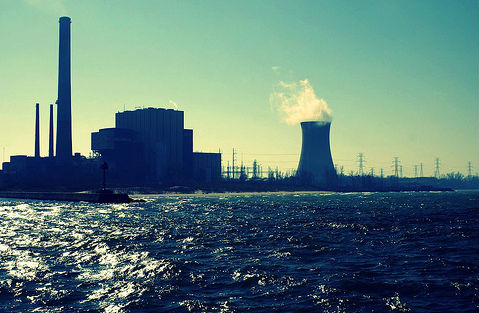 The Michigan City Generating Station on the shore of Lake Michigan in Indiana.

During a 2006 heat wave, the Prairie Island nuclear power plant in Minnesota had to cut its power generation by more than half because the water it draws from the Mississippi River for cooling was too hot. At least three other nuclear plants in Minnesota and Illinois also had to cut generation that summer – right at the moment electricity was badly needed to run air conditioners.

Similarly in Texas this summer, the record drought caused at least one power plant to curb power generation, and during the Southeast’s 2007 drought North Carolina customers saw blackouts because of water-related cutbacks by Duke Energy plants. In 2010, the Browns Ferry nuclear plant in Alabama reduced generation significantly for weeks because of record temperatures.

Such occurrences could become increasingly common with climate change and growing power demands, according to a report released Nov. 15 by the Union of Concerned Scientists (UCS). The report is the latest example of growing attention being paid to the “water-energy nexus” – the massive water demands of power generation, and potential difficulty meeting these demands in the face of population growth, climate change and regulatory revisions.

The UCS report describes a two-pronged threat: increasing ecological harm from power plants’ water use, and risks to the energy supply with warming temperatures and increasing drought.

The report points out that power plants withdraw several times more fresh water than households and municipalities nationwide, and about as much water as irrigated agriculture – approximately 100 billion gallons per year. The vast majority is returned to water bodies after it is used, while about three to six billion gallons per year is consumed – lost through evaporation.

(via Union of Concerned Scientists)

Coal plants account for about two-thirds of withdrawals and consumption among power plants. When water is released back into rivers or lakes it is significantly warmer – sometimes over 90 degrees – which has serious ecological impacts, including fueling algae growth that depletes oxygen and can be toxic to organisms and humans.

When water bodies are warmer than normal, power plants can have to reduce or suspend their withdrawals to avoid violating the Clean Water Act, which labels high temperature as a pollutant. Meanwhile, increased drought and reduced winter snowpack are expected effects of climate change, meaning aquifers, rivers and lakes may not always have enough water for power plants’ cooling operations.

And while people typically think of the Midwest as having plenty of water, the UCS report includes models based on Intergovernmental Panel on Climate Change predictions indicating greatly increased drought in Midwestern states including Illinois, Kansas and Nebraska.

“There are watersheds even in the Midwest where we get in drought situations,” said UCS climate and energy program senior analyst John Rogers. “When you add into that changing circumstances, whether it’s demand changing because of population growth or supply because of climate change, the point of our analysis is you really want to be thinking about those changes before they actually happen.”

A priority for utilities

Revis James, a Generation R&D director for the Electric Power Research Institute (EPRI), which is funded by member utility companies, said widespread blackouts and power shortages are not a likely scenario because of future water shortages and warming. But he said utility companies do see water issues as a top priority and increasing challenge, since cool water is crucial to plants’ efficiency and because more stringent regulations in the future could force the adoption of new technology.

In a journal article published this summer (PDF), EPRI said they had surveyed 89 electric utilities nationwide and found two thirds reporting “great” or “very great” concern about meeting water needs in the future, particularly because of “stricter regulations and public attention to water scarcity.”

Power plants can exponentially reduce their water use by installing cooling towers known as closed cooling systems, which reuse the same water over and over again. These are expensive and take up a lot of space, but withdraw only two percent as much water as once-through systems.

Power plants can also use dry cooling systems that use air rather than water to condense steam. But these are also expensive, take more energy to operate and are less practical in warmer climates.

But James said these methods are bound to be more expensive.

“There’s no such thing as a free lunch,” he said. “There’s always trade-offs. It’s not clear yet whether water will become a more important driver (in choosing technologies) than other types of drivers like emissions and cost to consumers … If water becomes so precious that these tradeoffs are worth it … we haven’t been at that place yet but we may get there.”

The UCS report doesn’t make recommendations but is intended to guide policymakers and power and utility companies in making “wise choices” about our existing power plants and future energy generation, said Rogers. The report notes that fossil fuel plants create a double whammy in the water-energy nexus since they use large amounts of water, and also are major drivers of climate change, which is expected to have serious impacts on fresh water quality and quantity.

Environmental groups point out that coal, natural gas and uranium also have serious “upstream” and “downstream” effects on water supplies on top of the direct effects of power generation dealt with in the UCS report. Strip mining of coal, in situ uranium mining and fracking for natural gas can all potentially pollute aquifers, rivers and lakes; and milling uranium and processing coal are water-intensive processes that result in contaminated wastewater.

Storing the waste products from coal and nuclear plants can also put water bodies at risk, as seen with the collapse of a coal ash impoundment into Lake Michigan from the Milwaukee-area Oak Creek power plant Oct. 31.

The Environmental Protection Agency is in the process of revising the section of the Clean Water Act — 316(b) — which regulates cooling water intake structures for major industries including power plants. Environmental groups say the proposed rule, released last summer for public comment, does little to protect ecosystems or push power plants to switch to closed cooling systems. The proposed rule essentially delegates to state regulators the power to decide what is the “best technology available” for individual plants, which critics say will mean a lax patchwork of standards.

In public comments filed in August, the Environmental Law and Policy Center and Natural Resources Defense Council argued that the proposed rule would seriously undermine the Obama administration’s Great Lakes Restoration Initiative and “continue to allow the Great Lakes to be used as a source for massive water withdrawals for once-through cooling of power plants and subsequent thermal pollution discharges.”

“There’s a grave concern in terms of lack of cooling towers and once-through cooling,” said ELPC attorney Faith Bugel. “Where fish species are already on the brink, this is adding another huge damage … I’m not going to argue that cooling towers are cheap, but if you look at the tenure for which a coal plant is going to operate, for plants at the beginning of their life span this makes sense. It is a cost you recoup given a sufficient amount of time.”

Power company and other industry interests also voiced much opposition to the proposed cooling structure rule, calling it too stringent. The EPA is in the process of making a final rule based on feedback from both sides. Apart from the 316(b) rule, industry representatives also think the government could ban open cooling systems or institute “zero liquid discharge” mandates in the future, forcing significant changes in cooling systems.

Environmental and clean energy advocates say such regulations are part of a carrot-and-stick approach needed to address power generation’s impacts on water and the risk of energy bottlenecks in a warming world. They call for more stringent rules regarding power plants’ cooling systems and water intake structures, and also more subsidies and incentives for wind power and distributed solar generation, especially in the Midwest where ample wind resources have not been tapped.

“This is about what can we do about existing power plants with things like 316(b), and also very much about the choices we’re making in terms of how we’ll meet energy demand in the future,” said Rogers. “It’s clear the Midwest is so well-positioned to do much more when it comes to taking advantage of renewable energy resources.”

Photo by cncphotos via Creative Commons