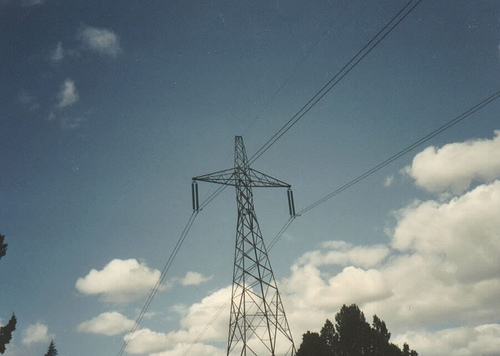 DC power lines, like this one in Oregon, are smaller and can run through narrower corridors, but also require expensive converters.

Wind data is collected, turbine positions are mapped, and landowner agreements are signed. Even the financing is lined up.

And yet plans for the NorthStar Wind Farms in north central Iowa sit on the shelf six years after they were proposed because the area’s electricity grid can’t carry any additional power sources.

“Transmission has been the bottleneck,” said Jack Levi, co-chair of the project’s developer, National Wind. “If we had transmission tomorrow, we could start construction within six months.”

Wind developers like Levi finally see help on the horizon.

The proposed Rock Island Clean Line would be a 500-mile transmission expressway between northwestern Iowa and the Chicago area, where it could feed into a regional electricity grid that extends from Illinois to the Jersey Shore.

The Houston, Texas, company that’s seeking to build the project has already started submitting applications to state and federal regulators. It’s holding a series of landowner open house meetings this week as it works to narrow down its final route.

RE-AMP, which publishes Midwest Energy News, has provided funding to groups advocating for the line, but was not involved in the reporting of this story.

The corridor that’s being looked at passes within about 50 miles of the plot for the NorthStar Wind Farms, which would generate up to 200 megawatts, enough to power about 60,000 homes, if it could reach them.

“This is a tremendous opportunity,” Levi said of the transmission line project.

Direct-current lost out to alternating current as the world’s electricity standard more than a century ago, but there’s recently been renewed interest in the technology because of its potential advantages for moving power from remote sources over longer distances.

“The load losses are less, so the amount of energy you put in at one end is a lot closer to what you get out at the other end than if you used AC,” explained Hans Detweiler, Clean Line’s development director.

Direct-current transmission lines run on smaller, shorter towers that require a narrower right-of-way. Wherever they connect with the rest of the grid, though, expensive converters need to be installed to change the power back to AC.

The Iowa-Illinois project is one of four such lines the company is trying to build. Each one aims to transport renewable power from the country’s interior plains or deserts out to population centers where electricity is in greater demand.

“The existing grid just was not built with the notion in mind that you’d be moving serious amounts of power from, say, Omaha to Chicago,” Detweiler said.

The Rock Island Clean Line transmission project would deliver 3,500 megawatts of power from the wind-rich plains around northwestern Iowa to electricity markets in the east. (Graphic provided by Clean Line Energy Partners)

The lack of long-distance transmission is limiting wind development in some of the country’s most wind-rich regions.

In northwestern Iowa, multiple wind developments are on hold and some existing wind farms are having to routinely curtail their generation because of a lack of transmission capacity, said Harold Prior, director of the Iowa Wind Energy Association.

The problems are driving developers to build wind farms in parts of the state that are less windy but have more transmission capacity, Prior said. This can involve building turbines taller and placing them closer to where people live.

The Rock Island Clean Line’s 3,500-megawatt capacity would make room for Iowa to nearly double its wind generation from a year ago, says Prior. The developer estimates that its project will spur $7 billion in new wind farm investment.

“It would be a huge boost to the development of additional wind farms in northwest Iowa,” Prior said.

Levi, of National Wind, said even if the transmission line didn’t specifically carry electricity from the company’s NorthStar Wind Farms or similarly stalled Red Rock Wind Farm, it should help free up other capacity on the local grid.

Clean Line applied to the Federal Energy Regulatory Commission last month for authority to begin negotiating rates with potential customers. It also asked for permission to give preference on the line to renewable power.

“When you look at the national wind resource map,” Detweiler said, “the purple area in western Iowa is the furthest east of the truly superior Great Plains wind resources. That’s the area we’re working to access.”

For each segment of the route, the company has honed in on two or three corridors between three and 10 miles wide. It’s hosting landowner open house meetings Monday through Thursday of this week in nine Illinois cities.

Any transmission project on this scale is bound to find opponents, Detweiler said, but the company has been pleased with the public response so far. The wind industry has strong political support in both states, he noted.

The company plans to file its site permits with both states next year, and it expects those cases will take about 18 months. It will also need approval from the U.S. Army Corps of Engineers for crossing the Mississippi River.

If customer contracts and land acquisitions fall into line fairly quickly after that, Clean Line could be breaking ground by 2014 and beginning service as early as 2016.

Photo by theslowlane via Creative Commons