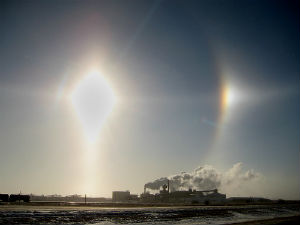 There has been plenty of recent discussion in North Dakota about the investment coal plant operators may have to make if –- or more likely when –- new federal haze regulations are put in place next year.

But even among those who support the Environmental Protection Agency’s effort to further reduce pollution from coal plants, there is disagreement over whether that money is being spent in the best way possible.

Though cost estimates are in dispute, two energy companies in western North Dakota say they will have to spend more than $700 million on emissions controls the EPA says are needed to restore natural visibility at the state’s national forests and parks.

Some environmentalists would like to see that money spent to expand energy efficiency programs or broaden the companies’ renewable energy portfolios, instead of prolonging the life of coal plants.

North Dakota, despite having one of the country’s largest wind potentials, continues to get nearly all of its energy from coal, most of which is a lower-grade form known as lignite. About 12 percent of the state’s electricity comes from wind resources, according to the American Wind Energy Association.

“We have the best wind in the world, and the worst coal, so I think it’s pretty obvious what we should be supporting,” said Mark Trechock, the executive director of the Dakota Resource Council, a statewide environmental group.

The non-profit organization has supported the EPA’s haze regulation efforts — which stem from the decades-old Clean Air Act — but has also said that more emphasis should be put on energy efficiency and the development of wind turbines.

“This is a pivotal point for our state’s energy planning,” Trechock said. “If our state is going to stay in the energy business in the future we need to be ramping down coal, ramping up renewables and finally doing something about energy efficiency.”

One reason Trechock and others believe North Dakota has been slow to move on energy efficiency and renewables is that the state has an abundant supply of fossil fuels, including oil, natural gas and coal, that all support the state economy.

North Dakota’s energy rates are among the lowest in the nation, and the state consumes more energy per capita than almost any other in the country, according to the U.S. Energy Information Association.

The state has also perennially ranked at the bottom of the American Council for an Energy Efficient Economy’s state energy efficiency scorecard, and was ranked last again in 2011. The scorecard rates states based on building energy codes, utility incentives and efficiency standards.

‘It comes down to the ratepayers’

State and industry officials say progress is being made in both efficiency and renewable energy.

But coal, both cheap and abundant, is likely to remain the state’s cornerstone energy supply for some time, and is still the only reliable consistent supply of energy, they say. North Dakota officials often cite studies that project enough economically recoverable coal in the state to continue supplying the state’s coal plants for the next 800 years.

“We could not shut down our baseload coal facilities and continue to serve our membership,” said Daryl Hill, a spokesman for Basin Electric Power Cooperative, which says it will cost $200 million to meet regional haze rules expected to be finalized by the EPA early next year.

Both companies also say they work with their retail distributors to encourage energy efficiency.

State officials have also been openly skeptical of energy efficiency programs. The state’s Public Service Commissioner, Kevin Cramer, recently equated efficiency programs to socialism, suggesting they unfairly benefit those who participate at the expense of those who do not (paywall).

“It comes down to the ratepayers and it’s safe to say in this area people want to buy electricity as cheaply as possible,” said Mike Fladeland, the manager of energy development for the North Dakota Department of Commerce.

Still, Fladeland said companies are beginning to consider a post-coal world given the increasing regulations and potential costs involved.

“I’m sure investor-owned utilities are asking as part of their long-term planning, ‘If federal regulations become too cumbersome, where do we go with coal-fired generation?’” he said.

Michael Sciortino, a policy analyst who worked on the state’s energy efficiency scorecard and is digging deeper into the policies of low-ranking states, said companies would be wise to consider future costs now.

“There is a real pride in the fact that they keep rates very low, but that’s a short-sighted view,” he said. “What this boils down to is understanding that energy efficiency is cost effective in the long run.”

Brad Crabtree, a policy director at the Great Plains Institute, would rather see utilities invest in creating systems that would capture carbon emissions at coal plants instead of on the kind of haze-reducing technology the EPA is pushing for.

The Great Plains Institute, Dakota Resource Council and ACEEE are all members of the RE-AMP network, which also publishes Midwest Energy News.

Crabtree, a one-time candidate for the state’s Public Service Commission, said investing in new kinds of carbon sequestration would go farther to achieve the larger goal of reducing greenhouse gases and combating climate change than the technology the EPA wants.

“I’m not sure money that is invested to control haze is necessarily the right prioritization of resources when it won’t do anything at all to address CO2 emissions,” Crabtree said. “If all that money is spent to address haze and nothing is done to address CO2 than what have we gained?”

“At the end of the day, what keeps me up at night is not haze, but climate change,” he said.

Editor’s note: An earlier version of this story incorrectly stated the Spiritwood power plant employs carbon capturing technology. It does not.