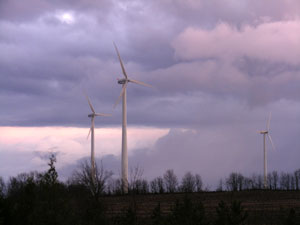 LINCOLN TOWNSHIP, Wis. — When the 31 Vestas wind turbines in northeast Kewaunee County, Wisconsin began producing electricity in the summer of 1999, a moderate Republican named Tommy Thompson was a few months into his fourth term as governor. Relative peace reigned between the parties in the legislature, statewide unemployment was at a record low and the Dow had just topped 10,000 for the first time.

But in Lincoln and Red River townships, where the turbines were erected, the climate was anything but mild. Residents’ tempers had been flaring since before April 1998 when Madison Gas & Electric (MGE) hosted the first meetings in the community about its plans to build 11.2 megawatts of wind power in the area. Wisconsin Public Service (WPS), a Green Bay-based utility, had also announced its intention to build a large-scale wind farm in the area.

Despite the heat, the two utilities found more than enough landowners in the two towns willing to host all 31 turbines, and the town boards soon voted to approve conditional use permits for the projects. But pressure from several vocal landowners convinced the Lincoln town board in February of 1999 to amend its zoning ordinance to require board affirmation of all applications for future conditional use permits. A few months later, both townships adopted 18-month moratoriums on future wind farm sitings.

“We had some real knock-down-drag-outs,” said Mick Sagrillo, who chaired a committee charged with evaluating the impact of the projects on residents and proposing any changes to the permit process. More than anything, Sagrillo said, people feared change.

Struggle and fear are no strangers to the people of the two townships, in an area that was long the home of the Potawatomi before the first Europeans arrived in 1634. The Belgian immigrants who landed here in the 1850s had to contend with dense virgin forests teeming with wolves and bears. When they set to clearing trees so they could do what they knew – farm – they discovered shallow, rocky, clay soil. They persevered, enduring an economic panic in 1857 and the Peshtigo Fire of 1871, which burned out 62 families in the Town of Red River and left 170 people homeless and destitute in the Town of Lincoln. Even a depression two years later couldn’t defeat them, and by 1874 they’d entirely rebuilt their communities.

In 1999, resiliency and a pioneering spirit, along with dairying and Roman Catholicism, still helped help define the two towns, which even today comprise the nation’s second- and fourth-highest concentrations of Belgian-Americans.

The small wind turbines on Mick Sagrillo’s property were among the first in the area. (Photo by Rick Chamberlin for Midwest Energy News)

“We were the guinea pigs,” said Sagrillo, who was appointed to chair the Lincoln moratorium committee in part because of his background in small wind; he’d put up the first of three wind turbines that stand on his property in 1981.

The 292-foot Vestas turbines MGE and WPS erected were giants compared with Sagrillo’s machines, but small by today’s sizes. Nevertheless, they were met by some members of the community with apprehension. A common refrain in 1999 was that the turbines would cause property values to plummet.

Although the Kewaunee wind farms were the state’s first, today there are 10 large wind installations in the state and 839 in the nation. But the man now holding Tommy Thompson’s old office has chilled wind development in Wisconsin. Seven large-scale wind installations have been cancelled or suspended since January, when Governor Scott Walker proposed legislation calling for much greater setbacks than those outlined in the Wisconsin Public Service Commission’s new wind siting rule.

Wisconsin as a whole is more volatile politically and economically than it was in 1999, but only a few embers from the firestorm that once raged in Lincoln and Red River townships over wind power still smolder.

The moratoriums in both towns expired uneventfully a decade ago, and the Lincoln Town Board took no action on the recommendations of its study committee. Conditional use permits for both utilities were extended in 2004 and 2009 with little opposition, although WPS’s 2004 permit renewal was held up for some months by objections from several nearby landowners, including one farmer who claimed stray voltage from the turbines had hurt his dairy herd.

That landowner and a few others went on to add their voices to an increasingly robust national anti-wind movement. Meanwhile, nearly everyone in the community has seen their property values rise despite a recession, and revenues meet those promised.

A 2003 study by the Renewable Energy Policy Project (REPP) found “no significant evidence that the presence of the wind farms had a negative effect on residential property values” in the communities closest to the Kewaunee County turbines.

Town of Lincoln Assessor and Zoning Administrator Joe Jerabek, who said he was on the fence about the wind farms when proposed, said the turbines haven’t had an impact on residential property values “one way or the other” since they were built. Recent figures from the Wisconsin Department of Revenue appear to confirm Jerabek’s assertion. The total municipal assessed value of residential property in the Town of Lincoln, which includes new construction, rose steadily from 2007 to 2011, with a total increase of 3.5 percent over the 5-year period. In the Town of Red River, where most of the 31 turbines stand, the increase exceeded 41 percent. By comparison, adjoining Casco Township, which has no wind turbines, saw an overall rise of 9.9 percent.

Gene Dalebroux is a direct descendant of the Belgian pioneers and has been Red River’s town clerk for 51 years. He agreed with Jerabek that the wind farms have not affected property values, and added that he’s not personally aware of anyone who moved away because of them. Jerabek counted eight new homes built in his township within a mile of the turbines since 1999.

When asked if dollars promised to landowners and the townships have materialized, Jerabek said, “I haven’t had any landowners complain that they haven’t received their lease payment.”

Lease payments from the utilities include a per-turbine fee and a fee for acres removed from service. Although the utilities don’t disclose how much individual landowners get, Dalebroux says the average to begin with was around $1,500 per turbine per year, “but that’s grown.” Don Peterson, who was MGE’s project manager for the Red River installation and is now Executive Director of Energy Products and Services at the utility, said landowner payments increase 6 percent annually and are adjusted every 10 years.

The county and the townships get shared revenue through the state’s tax on the utilities’ gross receipts in lieu of property taxes. Initially Lincoln Township’s share amounted to $19,765 annually for the MGE installation alone. But because these revenues decrease yearly due to depreciation on equipment, MGE agreed to make up the difference to the townships for the 30-year life of the wind farm. Jerabek says the check always arrives on schedule.

Two MGE turbines stand on the family farm where Ida and Joanne Fameree grew up and still live in Red River Township. Ida Fameree said MGE has lived up to its end of their agreement.

As for negative impacts, Fameree says she hasn’t seen any. She believes the old steel water windmills many farmers once employed were far noisier than the modern turbines. She said she would rather live near a wind farm than a nuclear power plant, a reference to the reactors at Carlton and Point Beach, about 40 miles away.

Fameree hasn’t noticed any impact on wildlife, either. DNR conservation biologist and Office of Energy liaison Shari Koslowsky said the agency has never received a report of dead or injured animals near the turbines in Lincoln or Red River Townships.

Retired Lincoln dairy farmer Andrew Nowak said he voted against the wind farms when he served on the zoning board, but now says he can live with them. He said noise from several turbines within a quarter mile of his home on a neighbor’s property doesn’t bother him. When asked if the wind farms have been a good thing for the community, he said, “I don’t think they’re bad.”

Done their part, thank you

Despite the converts, few residents interviewed think the community would favor more wind farms in the area.

“No comment,” is how Nowak answered the question, before adding, “A few people are still bitter.”

Former Lincoln Town Board member Ron Opichka, who was often at odds with Mick Sagrillo in the early days, is one of those few. He used the term “shoved down our throats” to describe how the turbines were sited and built.

Sagrillo said the passion of a small number of individuals like Opichka make many people think twice about singing the wind farms’ praises, despite evidence indicating the turbines are more benign moneymakers than monsters.

Joe Jerabek puts it differently when asked if he thinks his neighbors would be in favor of more wind farms in their community.

“We the people of the Town of Lincoln have made our contribution to renewable energy.”

Rick Chamberlin is a Wisconsin-based freelancer whose work has appeared in Wisconsin Trails Magazine, The Capital Times and other outlets.