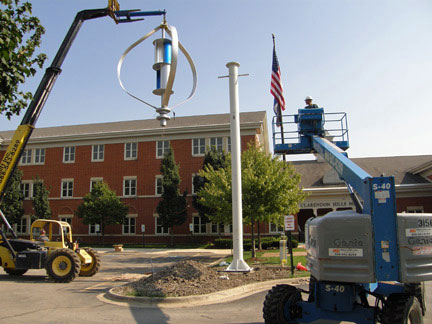 Even as they become more common, small-scale wind turbines remain a source of dispute in the renewable energy community.

Proponents say small wind turbines are ready to be an indispensable part of any home or small business’s energy mix, while critics say they’re inherently expensive and inefficient.

Planted firmly on the supporters’ side are Tony Magnotta and Jay Nygard, the founders of Minnesota Wind Technology in St. Paul. They met by chance two years ago at a trade show. Magnotta, the proprietor of the records and research firm Capitol Lien, had wanted to make his St. Paul building more energy efficient for years. Nygard was at the show to show off a small turbine.

Two years later, Magnotta and Nygard import vertical axis wind turbines (VAWTs) from the Taiwanese manufacturer Hi-Vawt. The turbine’s blades look somewhat like a giant, upside down version of a handheld kitchen mixer’s beaters. They can be seen spinning atop and next to Capitol Lien’s otherwise anonymous low-rise office building in St. Paul, which is also home to Minnesota Wind Technology.

“If you could get everybody in the country to do what they could to their properties, adding renewable and doing energy conservation, we would not have to build any new power plants for a while”, said Nygard. “That’s what we’re trying to do with the VAWTs.”

The Hi-Vawt turbine sold by Minnesota Wind Technology comes in three versions: a 3 kilowatt and 1.5 kilowatt models, and a smaller, 300 watt version designed to power street lights. The design is a hybrid of a stocky Savonius turbine along the axis, and a set of three thin, semicircular Darrieus blades.

“What’s unique about this design is that they took several basic designs and put them together in a very robust manner”, said Nygard.

“There is nothing there”, he said. “The vertical axis wind turbine is a very crude design. There’s nothing indicating it’s a breakthrough.”

Technologically, small wind turbines are about two decades behind large ones, said Gipe. “They are about 4 to 8 times less cost effective than a commercial wind turbine. And I haven’t even got to reliability or safety.”

According to Gipe, small wind turbines are only practical for off-the-grid applications, such as farms and ranches, and for people who insist on generating green power, no matter the cost.

“If you want to use small wind turbines for some aesthetic purpose, as a sales gimmick, or as a whirly-gig to attract attention, that’s OK. But you don’t need a wind turbine to do that. You could buy a whirly-gig for five bucks,” he said.

One such whirly-gig stands in front of the Clarendon Hills Middle School in Illinois, right next to the flag pole. The Hi-Vawt turbine was installed in September 2010, and principal Griffin Sonntag, who looks out at it from his office window, said he is very happy about it.

“It’s beautiful wind turbine. It was student-driven project. It’s an inspiration to the kids every single day they walk into the school.”

The middle school paid just under $40,000 for the 3 kilowatt unit, installation included, and expects to save between $500 and $1,000 per year. “It will take some time before the pay-off will make it cost-effective, but there’s so much more to the project”, said Sonntag, who calls the turbine primarily an educational project.

According to science teacher Nancy Grapenthien, who heads up the project, the turbine would perform better if it was placed higher. It sits on a 40-foot pole, and is partially obstructed by the 60-foot building. Grapenthien and her students had to obtain a zoning variance for the turbine.

“They didn’t want it over the top of the building”, she said. “If I could have gone up a little higher, I would be making more power.”

The turbine is attached to a computer display inside the school, where students can check its output every day. “Since we’ve had it in here, we’ve saved 2,152 pounds of CO2, because we didn’t have to use our coal energy,” said Grapenthien.

However, Grapenthien said the turbine can only produce a fraction of the 3,000 kWh of electricity the school uses each day. “I’m not touching my usage in any great degree, but it’s a great teaching tool.”

The company that sold the turbine to the school acknowledges the commercial potential for VAWTs in the Midwest is limited. Sam Gilberto, president of New Edison Energy in Batavia, Illinois, the only other Hi-Vawt dealer in the U.S., says he, too, sees them as mainly educational.

“We don’t sell the units here based on the economics of the system,” he said. “I think it’s challenging to find the right location where they make good economic sense. I think the market is going to remain relatively small.”

VAWTs need average wind speeds of 15 to 20 mph to function economically, said Gilberto, and those averages are rare, even in the Midwest. “In Chicago,” he says, “the average is 12 mph. Those wind speeds cannot justify a small wind turbine economically.”

Minnesota Wind technology is more optimistic. Magnotta says the wind-swept plains of the Midwest are fertile ground for VAWTs, and states such as Iowa and South Dakota are ideal.

But Gilberto says vertical-axis turbines perform best in locations with wind turbulence, often in mountainous regions. In the Himalayas they are used to power freestanding cell phone towers. Gilberto thinks they would make sense in comparable terrain in this country, such as the Rocky Mountains, but less so in the Midwest.

“If you can get good, clean wind, where you can go up high, and avoid the obstructions and the turbulence, then you would want to go with horizontal axis turbines,” said Gilberto, citing their greater efficiency.

The higher, the better

In the U.S., fewer than a dozen Hi-Vawt turbines are currently spinning, but the manufacturer’s website shows them in use in several Asian countries, such as China, India, Taiwan and South Korea.

“Quite frankly, there has been a lot of skepticism about those designs”, says Asmus, author of a recent report, ‘Small Wind Power,’ that predicts the market for small wind generators will double by 2015.

Asmus is a self-declared fan of small wind, but he, too, says the technology isn’t as far along as larger turbines, because it has not seen the same level of government funding and corporate investment.

“I’d say the jury is still out”, said Asmus. “Generally speaking, small wind for residences is never going to be a very cost-effective solution. It’s more for people who want to show they’re green and to augment solar. The best application for residences is still solar photovoltaic, especially since the cost of that dropped 75 percent over the last three years.”

Hi-Vawt turbines aren’t cheap. Minnesota Wind Technology charges $20,000 for the 3 kilowatt model, $15,000 for the 1.5 kilowatt one. Prospective buyers can apply for a 30 percent federal tax credit.

How quickly buyers can recoup their investment depends on a complex set of variables, including the turbine’s placement and output, the size of the building, and other energy efficiency improvements to it.

Assuming constant energy prices, Magnotta estimates it would take 15-20 years to make your money back. Gilberto thinks a 20-25 year recoup time is more realistic. “It is not short-term,” he says.

However, both firms expect electricity rates to rise, making their products more competitive. Both stress that government incentives could be crucial.

“Whether it’s a carbon tax or a renewable energy credit, that makes a huge difference, that would make both wind and solar a lot more competitive,” Gilberto said.

“My big hope is that they’ll keep the tax credit until 2016, because that’ll give us three to four years to get off the ground and have some assistance,” said Magnotta.

Wildly varying permitting processes are another stumbling block. Zoning rules for small turbines are mostly non-existent. Cities and towns are making them up as they go along.

Despite all current drawbacks, Asmus said he does see a bright longer term future for small wind.

“The key is micro-grids, having resilient communities. The beauty of the micro-grid is you can get solar and wind all working together as a system. Instead of looking at each home and each ranch as one turbine and one system, the micro-grid can aggregate all that together, and then separate when there’s a power outage.”

For now, vertical axis wind turbines are about more than just economics, says Gilberto. “It is making a really large statement about your company’s commitment to being green.”