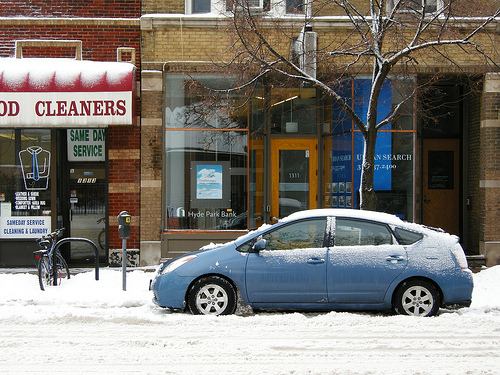 For gas-electric hybrids, cold weather can have a major impact on fuel economy. (Photo by Chad Kainz via Creative Commons)

Decades ago, plug-in cars were common in Minnesota.

For cars poorly suited for the upper Midwest’s frigid winters, a block heater plugged in overnight could keep the engine warm enough to start the next morning. Cars and trucks with electrical cords protruding from their grills were a frequent sight.

New technologies such as fuel injection, direct ignition, superior motor oils and better batteries have largely relegated that custom to history in all but the most frigid regions of the world. But with more than a dozen electric and plug-in car models due on the U.S. market in 2012, some Minnesotans will find themselves reviving the practice.

Shayna Berkowitz has some pretty strong opinions about how electric vehicles perform in Minnesota winters.

“Winter is very hard on this technology,” she said. “Batteries in winter do not equal success.”

Berkowitz knows something about the subject. Her company, ReGo Electric in Minneapolis, specializes in plug-in conversions for hybrid cars, adding additional battery packs to improve fuel economy while improving their all-electric range capabilities.

“To have an all-electric vehicle here in this climate is pretty radical,” Berkowitz says. “It’s a pretty dramatic thing to be able to do.”

However, there are some solutions that can make electric vehicles practical in cold climates.

Why cold weather is hard on batteries

There are several reasons why electric vehicles have special needs when it comes to operating in cold climates.

Conventional cars with block heaters plugged into an outlet in Finland. The practice of plugging in gasoline-powered cars is still common in frigid climates, like Scandinavia and interior Alaska. (Photo by Suvi Korhonen via Creative Commons)

The National Renewable Energy Laboratory (NREL) in 2006 found nickel metal hydride and lithium ion batteries used in electric cars could see a drop of more than 80 percent in capacity (PDF) at temperatures around zero degrees Fahrenheit, compared to 73 degrees.

Cold batteries also do not accept charging energy as easily as they do when warm, so the benefits of regenerative braking, which uses the car’s drive motor as a generator when slowing down, is much less effective. In addition, an all-electric vehicle must use some of its battery energy to power items like the cabin heater, seat heaters and the defroster.

Consumer Reports has noted the Nissan Leaf’s 100-mile range on a charge during the summer months dropped to around 65 miles in cold weather, and Berkowitz says that a Toyota Prius that normally gets 45-55 mpg will only get 35-45 mpg in winter because of diminished battery capacity.

ReGo developed ways of dealing with cold weather in its hybrid conversions right from its beginnings four years ago. ReGo’s system includes electric resistance heaters and insulation around its battery pack. The heaters are powered through the charging cable that plugs into the electrical socket in the owner’s garage.

“Without the winterizing that we do, [the batteries] wouldn’t function,” note ReGo’s Berkowitz.

The same strategy is used by major automakers, as well.

As with ReGo’s conversions, the Nissan Leaf uses an electric resistance heater to warm the battery when the car is attached to the home charging circuit. In addition, the Leaf can draw power from its lithium ion battery pack to heat itself, as long as the charge level in the pack is above 30 percent. The heater comes on automatically when the temperature falls below -4°F and shuts off again when the battery temperature rises above 14°F.

The Leaf, as well as the Chevrolet Volt, can pre-heat their cabins and batteries when plugged in overnight. ReGo offers a similar system, not just for hybrids but also for ordinary non-electric vehicles to help cut down on cold-weather idling while the interior comes to temperature.

And while the cold poses day-to-day driving challenges for EV owners in the Midwest, another NREL study showed that a battery pack operating in a cooler climate like that of Minneapolis will last significantly longer (PDF) than one that spends its life in a hotter city like Phoenix.

Car companies who are building electric vehicles do extensive winter testing to fully understand the cars’ limitations and adapt for them accordingly. GM, for instance, tested several pre-production Chevy Volts in Kapuskasing, Ontario, where temperatures can drop to -40 degrees Fahrenheit. But only when a significant number of plug-in hybrids and electric vehicles hit Midwest highways will the success of these adaptations be known.

“When it comes to transportation, people want reliable, dependable, consistent, easy technology,” she said. “Change is hard for people. They don’t want their commute to be a science fair project.”

Rick Fuentes is a cycling writer and two-wheeled photographer.