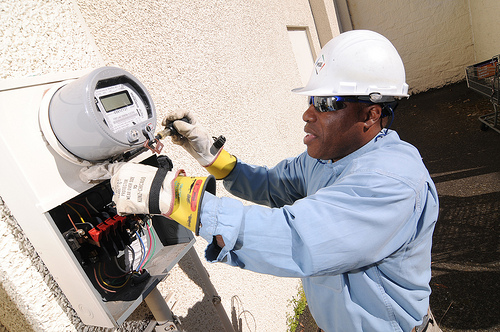 The prosperous Chicago suburb of Naperville might seem an unlikely spot for a large protest against “smart meters” that utilities have begun installing across the United States.

Yet in this normally quiet community, foes of the city’s $22 million smart grid program managed to deliver a petition with more than 4,200 names that calls for the city to hold a referendum to halt its program. A nasty battle has ensued since the petition was delivered last year with charges and countercharges over the validity of the names in a typical Chicagoland political fight.

“We have four main objections,” said Lisa Rooney, an organizer with Naperville Smart Meter Awareness. “The cost, the security, health and privacy – all of those fall under the guise of freedom of choice and personal property rights. We want the freedom to choose what type of technology is installed on our homes.”

Smart meters are seen as linchpin of a smarter grid. They allow utilities to begin instituting time-of-day pricing, offering consumers an opportunity to save money by cutting power use during periods of peak demand.

In some scenarios a consumer could even have a utility manage their electric use in return for a break on bills. Utilities, meanwhile, could improve management of power distribution – including responding to outages more quickly — and potentially avoid making large investments in new generation capacity.

Naperville isn’t the only city facing a backlash over new metering technology. In St. Paul, Minnesota, a program to install wireless water utility meters met with resistance over health concerns that led to an opt-out option for homeowners.

In Michigan, where more than 600,000 meters are being installed by DTE Energy, four communities with a collective population of 311,000 have asked the Michigan Public Service Commission to provide an opt-out to consumers and to investigate various concerns over the smart grid program.

In California, Pacific Gas & Electric (PG&E) has installed 8.7 million smart meters but was forced by the state’s Public Utilities Commission (PUC) to allow consumers to opt out.

A national website, StopSmartMeters.org, tracks the budding movement and has reported 47 communities have halted their installations.

Industry advocates, however, say the concerns of protesters are largely unfounded, and the size of the protests indicate few people have complaints even after more than 20 million smart meters have been installed.

“I think the protests are small compared to all the people in the United States and the meters in the U.S.,” said James W. Morozzi, president & CEO of The Washington, D.C.-based Gridwise Alliance, which lobbies for smart grid technologies. “It’s a very small percentage that has voiced any issues or complaints.”

In St. Paul, where the city’s water utility is spending $18 million to install 94,000 new digital meters that will largely remove the need for a staff of meter readers.

Similar to smart meters, the water meters emit a short low frequency radio wave every 14 seconds which carries data on the water usage of a home or building. A water utility vehicle passing by once every three months, on average, will take a reading and a bill will be sent based on usage.

St. Paul homeowner Petra Bokken and her allies said the main objection to the program has been over health concerns regarding the nearly constant microwave pulse the meters emit.  Some residents with meters have complained of headaches and other illnesses they believe have been caused by microwave pulses, she said.

Bokken and others also cite a World Health Organization press release last May, which suggested cell phone signals could be classified as a “Group B” carcinogen, as evidence the low frequency microwave signals could lead to cancer.

However, the release merely calls for further research, saying the WHO has found little evidence connecting radio waves to cancer. Other products classified as Group B carcinogens include coffee, pickled vegetables, and carageenan, an ingredient commonly found in ice cream.

Morozzi says all smart meters being installed in the U.S. abide by Federal Communications Commission standards for radio waves, as well as within guidelines set by international organizations. A 2011 review [PDF] conducted by the California Council on Science and Technology found existing standards were adequate to protect public health.

PG&E’s website points out that one of its smart meters would have to be on 1,000 years to produce as much exposure to radio waves as average cell phone users get in a month. Many consumer appliances, such as microwave ovens and wi-fi routers, have equal or greater power density per square centimeter than smart meters, according to the FCC.

Smart meter opponents, such as this shop owner in California, have posted signs asking for meters not to be installed. Some have gone so far as to bolt or chain their meters to their homes. (Photo by Jason Tester via Creative Commons)

Unlike many other smart grid rollouts, Naperville’s is being conducted by a city-owned utility. The program will install 57,000 meters in homes and businesses in the city, with half that cost paid for by the federal government, and the rest from the utility. Installation starts this year.

Opponents, such as Rooney, say the utility did not properly inform the public about the program, and they question whether it will save consumers money, or simply allow utilities to make more money. Utilities will hold too much information over how homeowners live their lives, she said, and that could be sold to marketing companies.

However, no reports exist of utilities having sold personal consumer information, and Naperville passed a strict ordinance last February prohibiting its utility from selling any customer data.

Nevertheless, many Naperville residents, some of whom have gone so far as to physically bolt their existing electrical meters to their homes, want at least a chance to opt out. The council has suggested an upfront fee of $68.35 and a charge of $24.75 a month to continue to have a non-digital reader.

“That’s punitive, and significantly higher than other opt-out programs around the country,” said Rooney.

In California, PG&E asked for a $270 upfront charge and a $14 monthly charge to pay for meter reader visits, or $135 upfront and $20 a month. The state’s PUC suggested $90 upfront, $15 a month, while low-income and elderly would pay a flat $5 a month. A decision will be made soon.

In St. Paul, where more than 300 homeowners called the city to consider opting out, the water utility offered two options. One allowed for a digital reader installed outside the home instead of in basements, where most of them are located. The other option, a touchpad, costs $48 annually, and would require a water department employee to read it.

Early experience with opt-outs suggests few customers will take advantage of it. Central Maine Power, which has 450,000 customers, charges $12 a month for an analog meter after an initial $40 fee. About 8,000 customers expressed interest in the opt-out but when confronted with fees the figure dropped by 10 percent, according to a November GreenTech Media article.

Even advocates of smart meters agree their rollout has been less than a stellar.

“Many customers and stakeholders felt they weren’t asked whether they wanted these meters – they were given no information and no choice,” wrote smart grid authority Dr. Peter Fox-Penner in a Harvard Business Review blog post last year. “Combined with misinformation about the intent, cost, and impact of smart meters, this ‘top-down’ has bred something of a backlash that isn’t surprising, even if it is regrettable.”

Another mistake utilities have made is suggesting they will monitor the second-by-second electrical use of homeowners, said Bruce Wallenberg, director of the University of Minnesota Center for Electric Energy.

“You couldn’t ask for a bigger fight than by doing it that way,” he said. “I wouldn’t want a record of every current in my (electric) line transmitted to anyone.”

Jennifer Stahl, another leader in the Naperville Smart Meter Awareness group, said the utility’s own studies revealed only 15 percent of customers “planned to participate” in time-of-use pricing and other programs.

“It sounds great, it was a hook for me in the beginning but I’m a stay-at-home mom and I’m not going to do laundry at 10 at night,” she said. “Behavior is what changes energy use — a smart meter isn’t going to change energy use.”