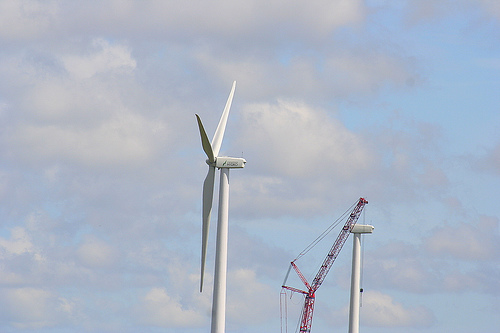 The wind industry continued to expand in 2011, but industry officials said the momentum is likely to come to an abrupt halt if a crucial tax incentive is allowed to expire this year.

In a conference call with its members and the media, leaders of the American Wind Energy Association said that 6,810 megawatts of new wind energy capacity came online last year, up 31 percent from 2010.

Current and in-development wind capacity by region, via AWEA.

Officials said there are 8,300 megawatts of new wind energy under construction now, but that the surge in activity can be in part attributed to uncertainty over the future of the production tax credit. The tax credit provides developers with 2.2 cents per kilowatt hour of wind energy and will expire in December without legislative action.

AWEA is seeking passage of a four-year extension of the PTC, proposed by U.S. Rep.’s Dave Reichert (R-WA) and Earl Blumenauer (D-OR) in November.

“We don’t expect to have this tax incentive forever, but we do need encouragement and support to finish the job,” said Denise Bode, AWEA’s chief executive.

Bode said she was hopeful that the tax credit would get extended – as it has three times in the past decade – but said it needs to happen sooner rather than later.

Leaders of two companies that supply components for wind turbines joined in the call to underscore the uncertainty that exists in the industry today and stress the need for swift passage.

“The damage is very severe, and not only just the immediate loss of jobs, but the loss of skills,” said Terry R. Royer, the chief executive at Winergy Drive Systems Corporation, which provides component parts from its factory in Elgin, Ill.

Royer said the company typically forecasts needs eight to ten months in advance, and that the company needs assurance this quarter in order to plan appropriately for 2013.

Iberdrola has already suspended planning for new wind farms in the U.S., an executive told Dow Jones Newswires on Wednesday.

Ohio saw the largest year-over-year increase in wind capacity, adding 101 megawatts of wind energy capacity. Kansas has more wind energy under construction than any other state – 1,188 megawatts, according to the AWEA.

But even in states where activity is robust, there are fears of a precipitous dropoff.

Prior said he knew of one project in Iowa that had already been put on hold, and pointed to layoffs at Clipper Windpower, in Cedar Rapids, Iowa, as harbingers of what could come if the tax credit expires. As many as 3,000 jobs in Iowa could be lost without the tax credit, he said.

And although each member of the Iowa delegation has voiced support for the extension, Prior remains concerned that the issue will flounder during the election year.

“Watching this Congress from afar, I can’t say I’m very confident,” he said.