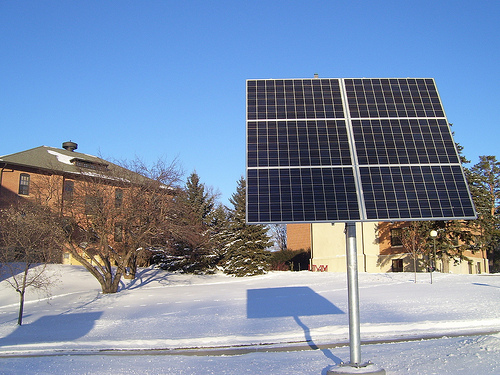 A solar panel at the University of Minnesota's Morris campus. (Photo by CERTs via Creative Commons)

Beneath the campus of Ball State University in Indiana is a labyrinth of pipes 400 feet deep, filled with water that heats and cools much of the campus and that, when complete, will allow the school to retire four archaic coal-fired boilers.

At the University of Minnesota’s twin campuses in Morris, two 1.6-megawatt wind turbines provide more than half the school’s electricity and power experimental operations making hydrogen fuel and fertilizer. Two solar thermal installations heat and cool an indoor pool and other buildings; and a biomass reactor uses corn cobs to generate steam for heating, cooling and electricity.

Colleges and universities in the Midwest and nationally are increasingly adopting onsite renewable and clean energy – geothermal, wind, solar and biomass installations – as a way to promote sustainability, reduce carbon footprints, dovetail with research programs, and ideally result in long-term cost savings.

The University of Toledo meets much of its power needs with a 1.12-megawatt solar array and an 80-kilowatt wind farm at its Scott Park Campus of Energy and Innovation; officials have committed to eventually powering the entire campus with renewable energy and biofuels. The school’s new indoor football field and sports complex is heated and cooled entirely through a geothermal system.

Universities can also commit to buy clean energy – usually at a higher price than fossil fuel-generated power – from a utility company. In December Oklahoma State University signed a 20-year deal to power its main campus in Stillwater by a 60-megawatt wind farm being built by the Florida company NextEra Energy Resources, through a contract With Oklahoma Gas & Electric. The University of Wisconsin purchases 16 percent of its energy from renewable sources, though it doesn’t generate clean energy itself.

Many colleges and universities are also undertaking ambitious energy efficiency programs, with the idea that the cleanest and cheapest energy is energy not used at all. The University of Minnesota reports it has saved $4.6 million a year in energy costs through efficiency upgrades, making it a leader in a recent national initiative to promote energy efficiency on campus.

In several ways, universities are ideal locations for on-site renewable energy. They usually have large buildings with ample roof space for solar arrays. They often have room for wind turbines on campus grounds, or on surrounding public land or private farmland. Higher learning institutions are embracing sustainability practices from LEED-certified buildings to comprehensive recycling programs to electric vehicle fleets, so on-site clean energy is a natural fit. The development, installation and maintenance of such systems can be part of the curriculum and provide internship and field trip opportunities, as well as creating local jobs.

But especially given current state budget crises, the financing of renewable energy projects can be challenging. Since they don’t pay taxes, universities can’t directly take advantage of renewable energy tax breaks. In some cases, including at the University of Toledo, universities can enter a power purchase agreement (PPA) with a third party company which will take advantage of tax breaks and then sell power to the university.

The University of Minnesota’s West Central Research and Outreach Center and Morris campuses, across a river from each other, received significant money for their projects from state bond issues and the university’s Institute on the Environment, funded by state ratepayers through Xcel Energy’s Renewable Development Fund. With the wind turbines generating about 5 million kilowatt hours of electricity per year, they expect energy cost savings over the turbines’ lifetimes.

Private companies also help support renewable energy on campus, through research partnerships and equipment donations. For example, the University of Houston, in the heart of fossil fuel country, recently launched a 20-kilowatt solar array donated by Green Mountain Energy Company. University sustainability coordinator Leah Wolfthal said it is a keystone of an increasing focus on renewable energy technology at the school. Valued at $140,000, it is expected to save the school $300,000 in energy costs over its 30-year lifetime.

Out with the coal, in with the new

Ball State still needs $30 million to complete its geothermal system, which will be the largest of its kind in the country, according to Jim Lowe, director of engineering, construction and operations. The existing system, which heats and cools about half the campus’s major buildings, was built with a $5 million U.S. Department of Energy grant and a $45 million state appropriation for replacing aging boilers.

Ground was broken in 2009, and currently 1,800 bore holes on the north side of campus are laced with two looped pipes per hole, filled with circulating water that uses the year-round constant temperature of the earth to cool buildings in summer and heat them in winter. This summer they will start boring 780 holes under the south campus, each 500 feet deep and containing one pipe loop.

Ball State’s four coal-fired boilers, built in 1941 and 1955, will need to be retired in coming years because of decreasing efficiency and their inability to meet federal mercury standards. They also emit about 85,000 tons of carbon dioxide per year.

University officials originally planned to replace them with boilers that would burn 30 percent biomass, but after that plan proved too expensive they turned to geothermal. Lowe said the complete geothermal system will cost about $15 million more than the cheapest alternative boiler plan, but will save about $2 million per year compared to that plan.

Renewable energy projects and research on campus can also help spark manufacturing in the surrounding area. Stansley said the Scott Park campus has contributed to a proliferation of wind turbine component manufacturing in Ohio in the past few years.

“We’re just now starting to see the supply chain advantage – when we put the array in on Scott Park campus, we had about 90 percent of the product other than the modules themselves really produced outside the Ohio area, a lot from outside the country,” he said. “In more recent installations in the state, we have reversed that. About 95 percent of the materials are all produced in the U.S., primarily in Ohio.”

The renewable energy installations in Morris are largely from Minnesota suppliers. And officials hope an experimental project there will spur wind development and help farmers statewide: they use wind power to create anhydrous ammonia fertilizer and hydrogen fuel – a way to efficiently use electricity when the wind is blowing strong, eliminating the need for battery storage or transmission lines.

The universities all view their projects as models for other institutions and municipalities. Lowe said representatives from more than 30 entities including the city of Toronto have expressed interest in replicating Ball State’s geothermal system. University of Minnesota, Morris sustainability coordinator Troy Goodnough said the two campuses’ efforts also complement sustainability initiatives by local dairies and farmers.

“What’s exciting to me is this region is an evolving renewable energy destination,” he said. “If people want to spend an afternoon and see a lot of renewable energy technologies in action and kick the tires, I can’t think of a better place to come.”

Editor’s note: An earlier version of the story implied the University of Toledo planned to purchase its solar array from Constellation Energy. It has the option to do so, but no decision has been made.