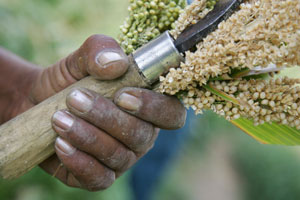 Could juice from this corn-like, African plant someday fuel our cars? (Photo by ILRI via Creative Commons)

Most biofuels today are made by extracting sugar from plant material, then feeding it to bugs in a fermenter, which transform it into larger molecules similar to crude-oil hydrocarbons.

Dave Jessen is working to bypass all of that.

Jessen is chief technology officer at Chromatin, a Chicago biotech company that’s working to genetically engineer varieties of sweet sorghum that would convert sugar to biofuel before it even leaves the plant.

“You let the plant do all of that extra work,” says Jessen.

If successful, within a few years Chromatin will have a plant from which you’ll literally be able to wring biodiesel out of at harvest.

Chromatin’s concept has enough promise that the U.S. Department of Energy’s Advanced Research Projects Agency-Energy (ARPA-E) recently awarded $5.7 million to Chromatin under its PETRO (Plants Engineered To Replace Oil) program. PETRO’s challenge to participants: come up with a crop that produces twice as much energy per acre as what’s currently possible with corn.

The sugar-rich, tropical grass — which looks like corn without the ears — would appear to have many advantages. It grows quickly, up to 14 feet tall, in time to plant and harvest twice a year in warmer regions. And it requires half the water and fertilizer it takes to grow corn. Scientists are also working on varieties that produce even more sugar, and ones that could be grown in colder climates.

Still, a century and a half after sweet sorghum was introduced to America from Africa, it remains a boutique crop in this country with little commercial-scale infrastructure. Competing with corn — or even finding a place alongside it — will require investment in new equipment and years of outreach and education to farmers, who won’t be easily convinced to switch from a known commodity.

In the 1860s, the U.S. Department of Agriculture was interested in sweet sorghum as a way to reduce reliance on imported sugar cane and slave-owning sugar plantations, according to the National Sweet Sorghum Producers & Processors Association. At the time, the Midwest was the biggest producer of sweet sorghum, which was sometimes called the “Northern Sugar Plant.”

Ultimately the plant proved unsuitable for making dry sugar, and instead it was used to make syrup (and probably moonshine, too, says Jessen). By the 1890s, the crop had mostly migrated to the Southeast, where it’s better suited for the climate.

Sorghum syrup, sometimes called sorghum molasses, still turns up at farmers markets from Iowa to Indiana (where you can attend the annual Crawford County Sorghum Festival in October). Sorghum syrup production peaked around 24 million gallons in the 1880s and then plummeted as glucose syrups took over the market.

Today it’s a tiny industry, accounting nationally for somewhere between 10,000 and 30,000 acres of cropland.

A stand of sweet sorghum being tested for biofuel production in Mozambique. (Photo by Swathi Sridharan via Creative Commons)

Countries such as India and Brazil are already ramping up sweet sorghum production to supplement sugar cane as an ethanol ingredient. That isn’t happening yet in the United States, which is more attached to corn, but the federal energy and agriculture departments are funding research and a handful of companies have small projects in the planning stage.

“It’s an ideal crop for almost everything,” says Ismail Dweikat, a sorghum genetics researcher at the University of Nebraska-Lincoln who is working to create a cold-tolerant variety to expand the crop’s range. “It’s very cheap to grow. It’s very cheap to make ethanol out of. It’s environmentally friendly. It does not require as much nitrogen or irrigation. It’s an ideal crop.”

In places that receive at least 15 to 20 inches of rain per year, sweet sorghum can be grown without any irrigation at all, says Dweikat. It requires half the fertilizer that corn crops take, and the process of making ethanol from it is far less energy intensive. Instead of grinding and cooking kernels, you simply juice the stalks, add baking yeast, and wait 48 hours.

An improvement such as the sugar-oil conversion Chromatin is working on could be the game-changer the crop needs to find a place in U.S. energy production.

Improving on nature’s design may prove to be the easy part, though. Next comes convincing U.S. farmers to grow it.

Our agricultural infrastructure, from the subsidies to transportation, is set up for producing lots and lots of corn. Getting farmers to try sweet sorghum instead is going to take time, education, and probably incentives, too.

Dweikat says government and universities will likely have to take the lead in advancing early projects. He thinks existing ethanol plants could be adapted to also process sweet sorghum for less than $5 million per facility.

The production facilities would need to be located close to the sweet sorghum farms. The juice needs to be collected and processed within hours of harvest or it goes bad. That also means it’s a commodity that can’t be stored like corn, so farmers would lose control over when they sell.

Current sweet sorghum varieties can’t be planted until soil temperatures are above 65 degrees. The variety that Dweikat is working on would be able to sustain 50 degree soil temperatures, but even then Midwest farmers might not be able to fit two cycles into each growing season, something that’s possible in the South.

Policy changes are needed, too, according to Chris Cogburn, strategic business director for the National Sorghum Producers. The U.S. Environmental Protection Agency doesn’t yet recognize sweet sorghum ethanol in its renewable fuel standards, something the association is lobbying to change. Until that happens, and more productive hybrid varieties are available, most companies are holding off on significant investments, says Cogburn.

Dweikat thinks those investments might be less than five years off. Chromatin’s PETRO grant is for a three-year study, after which the DOE plans to pursue field testing of the most promising energy crops. Others crops being studied through the PETRO program include grasses, tobacco, camelina, and pine trees.

“What we tried to do was to put together an interesting portfolio of approaches that could theoretically hit the cost and yield targets,” says Jonathan Burbaum, PETRO’s program director.

At the end of the project, PETRO won’t be endorsing any single crop, and that’s because all agriculture is regional and the best option will depend on where you plan to grow it. (Sweet sorghum, for example, may have advantages in drier climates or marginal crop land.)

“It’ll have a niche, and it’ll fit well,” says Cogburn. “Could you produce 500 million gallons from sweet sorghum? I think that could happen. It’s going to be a good-sized industry, but it’s not going to be corn ethanol.”

EDITOR’S NOTE: An earlier version of this story misstated the amount of time it takes to convert sorghum sugars to biofuels. It is 48 hours, not 4 to 8 hours.