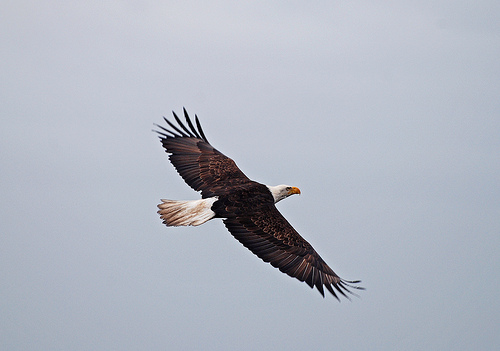 Mary Hartman almost daily makes the 45-minute drive from her home east of Rochester, Minnesota, to a horse farm north of town, where she takes out a 15-year-old mare named Paloma for rides around the countryside.

The horse’s name comes from the Spanish word for dove, but there’s another symbolic bird that Hartman says she sees on nearly every ride: the bald eagle.

As Hartman read last year about the proposed Goodhue Wind project, a 48-turbine wind farm that would be built a short ride from her horse’s stable, she thought about the eagles she sees on her rides.

“They were in an area where this developer said there were no bald eagles, and I set about to correct that,” said Hartman, who has since become one of the project’s most visible opponents.

The group of citizens trying to stop the development have raised nearly every concern imaginable, from aesthetic complaints to health and safety fears. Today, the focus will be on Hartman’s eagles.

The Minnesota Public Utilities Commission is scheduled to hear testimony and take action today on the developer’s avian and bat protection plan, which outlines the company’s plans to monitor and minimize the impact on area wildlife. The commission has to approve the plan as a condition of the site permit it issued last summer. (UPDATE: The PUC voted 2-1 Thursday to reject the plan)

It’s unlikely to be the last word on the wind farm’s wildlife impact, though. AWA Goodhue has also agreed to work with the U.S. Fish and Wildlife Service (FWS) on an “incidental take permit.”

While bald eagles are no longer considered an endangered or threatened species, they are still protected under the 1940 Bald Eagle Protection Act.

The permit would let federal officials add conditions to the project in exchange for legal protection in the event that eagles are killed or disturbed by the wind farm. The Goodhue project would be among the first in the country to apply for such a permit.

What’s in the plan?

In its wildlife protection plan, AWA Goodhue describes several steps it says it will take to reduce the risk its turbines will pose to bats and birds. They include:

The developer also offered to maintain at least a one-mile buffer between any turbine and the nearest eagle nest — half the distance that federal wildlife officials have recommended. The number and placement of active nests has since been a point of contention, with citizens like Hartman documenting and reporting several previously overlooked sites to wildlife officials, who have confirmed some of them.

The Minnesota Department of Natural Resources (DNR) raised a long list of questions and complaints last month about AWA Goodhue’s original protection plan document. The January 12 letter accuses the developer of failing to collect and improperly excluding data from its bat surveys so that the results were “misleading.” It says a DNR employee in December observed an adult eagle sitting in a nest the developer’s study marked as “inactive.” And it criticized AWA Goodhue’s claim that it couldn’t predict the collision risk for bald eagles because of alleged “eagle baiting” by the project’s opponents.

“Staff discussions with conservation officers in the area indicate that there is no known movement of deer carcasses for the purpose of baiting eagles occurring within the footprint,” wrote DNR environmental review planner Jamie Schrenzel.

The DNR also identified two eagle nests that were within less than a mile of turbines. Hartman has been preparing a map for Thursday’s commission meeting that shows 17 eagle nests she claims are in the greater area, 13 of them within a 10-mile radius of the project. She said opponents intend to argue that AWA Goodhue’s plan should be rejected on grounds that its nest maps are inaccurate or incomplete.

A spokesperson for AWA Goodhue declined to comment for this article.

The developer revised its bat and bird protection plan based on feedback from state and federal wildlife officials. In subsequent letters the DNR said some, but not all of its concerns were addressed, and that its reviewers “do not currently agree with all assertions made by the project developer.” The federal agency said its concerns have been resolved, with the exception of the eagle issue.

“One of the things folks really need to think about, is if Minnesota goes ahead and says OK on this, is the state going to be comfortable if bald eagles start getting killed at this facility?” says Kelly Fuller, wind campaign coordinator for the American Bird Conservancy, which has taken the lead nationally in trying to keep wind farms out of critical bird migration paths.

American Bird Conservancy hasn’t taken an official position on the Goodhue Wind project, but Fuller has been tracking the development since last fall, and she believes there’s reason for concern. The project is located 15 miles west of the Mississippi River, a major flyway for migratory birds. There are practices and technology that can reduce bird-turbine impacts, but the most important factor is siting.

The wind industry’s growth in recent decades means most of the prime, windy locations near long-distance transmission lines have already been developed. That’s pushing wind developers into new territory, often closer to people and sometimes closer to important bird habitat and flyways.

FWS has raised concerns about avian impact for projects in Michigan, Nebraska, and elsewhere, but they’re usually built anyway because they only require approval from a state or local commission. Once built, however, a wind farm operator is theoretically guilty of a federal crime if one of its turbines causes the death of a protected eagle.

Are take permits the answer?

The legal risk remains theoretical because there are no known cases of wind farm operators being prosecuted for eagle deaths, although at least one is currently being investigated. The Los Angeles Times reported last week that federal agents are investigating the deaths of eight federally protected raptors at the Pine Tree wind farm, about 100 miles north of Los Angeles.

Eagles face a number of threats besides wind turbines. Dr. Julia Ponder, executive director of the Raptor Center in St. Paul, says there are only five known cases of bald eagles being killed by wind turbines nationwide since the industry began. By comparison, the center received 29 eagles last year alone that died from lead poisoning.

The incidental take permit, which AWA Goodhue intends to apply for, is a tool to mitigate eagle disturbance and lend some legal clarity to developers in the process.

The permit is only an option in areas where the eagle population is stable or increasing. Once that is established through monitoring and analysis, wind developers are expected to come up with a conservation plan. After that, they would be given a permit for a certain number of eagles per year, up to which they would not be prosecuted for turbine collisions.

“The focus is on trying to develop an eagle conservation plan that would be workable for the company but would meet muster,” said Al Manville, senior wildlife biologist in the U.S. FWS Division of Migratory Bird Management.

The permits aren’t mandatory, but the Service is encouraging them in places where eagles are likely to be disturbed, Manville said. The West Butte Power Project is Oregon is the first wind project to seek one. Fuller, of the American Bird Conservancy, said Goodhue Wind would be the first to seek one for bald eagles.

First, the Minnesota Public Utilities Commission needs to approve its overall bat and bird protection plan. The item is last item on the commission’s agenda today and expected to be taken up sometime after 11 a.m.