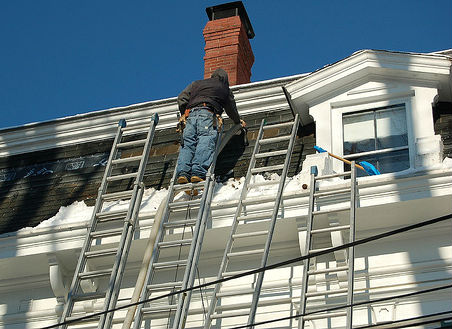 While opponents have targeted the program for cuts, federal weatherization efforts have been among the top job-creators of the stimulus package. (Photo by ilovebutter via Creative Commons)

The nation’s investment in weatherization is taking a nosedive, raising concerns that newly minted technicians trained to make homes more energy-efficient will soon find themselves scrambling for work even while there remains much work to be done.

At issue are cuts to the U.S. Department of Energy’s Weatherization Assistance Program, which is used to help low-income residents make energy efficiency improvements in their homes. The program is administered by state officials who distribute the money to local governments and community action groups that run weatherization programs.

The WAP has quietly existed since 1976, but received a $5 billion boost with the passage of the American Recovery and Reinvestment Act in 2009.  The investment, which came in addition to the continued regular funding stream, was seen as a way to provide jobs.

Since then, it has been criticized for getting off to a slow start and having a spotty job production record. A House proposal introduced in November called for its outright elimination following reports that contractors weren’t making critical improvements and were instead spending the money on work that had nothing to do with weatherization.

Still, proponents say the investment ultimately led to improvements at more than 600,000 homes while providing thousands of unemployed workers with much-needed jobs amid the housing collapse.

Their concern is that the momentum will be lost as stimulus funds run out and funding for the program falls amid efforts to trim the federal budget. The WAP program was cut from $171 million in 2011 to $65 million this year.

A group of 25 states – including Iowa, North Dakota, Minnesota and Ohio – are facing particularly austere years after being told in mid-February that they would not receive additional funding for the 2012 program year.

The states are being told to instead use whatever unspent weatherization funds they have to sustain their programs. The decision was made so that this year’s limited funding supply could be spread more evenly around the country, according to the DOE.

In Minnesota, which received $132 million in weatherization money from the stimulus package, officials say the decision could leave the state with less than $9 million to spend this year, crippling weatherization efforts just as momentum was beginning to build.

Minnesota officials say more than 18,500 homes were weatherized using stimulus money, and that the work created or maintained 500 jobs per quarter between September 2009 and July 2011.

Mike Rothman, the state’s Department of Commerce Commissioner, voiced his concerns in a Feb. 10 letter to U.S. Secretary of Energy Steven Chu in which he wrote the funding level would lead to “dramatic reductions in the number of homes weatherized and jobs created.”

Rothman said in an interview that he is working with the state’s congressional delegation to build support and remains hopeful the DOE will release more money, but that he has yet to get any response to the letter.

The National Association for State Community Services Programs has also voiced concerns about the cuts, and describes this year’s funding level as the “bare minimum to survive.” Officials with the organization say they do not expect anything to change this year, however, and are turning their attention to 2013.

President Obama’s 2013 budget proposal calls for $139 million in weatherization funds, but the NASCSP and other supporters say the weatherization program needs at least $175 million to maintain the still-fledgling industry.

“We’ve built up a certain capacity and now we have to do whatever we can to sustain that,” said Bob Scott, the NASCSP’s director of energy services.

One of the biggest fears is that people who were trained to make home improvements will soon find themselves out of work. The WAP was credited with creating or maintaining around 13,000 jobs in the fourth quarter of 2011 – second only to highway planning and construction.

The job losses will come at places such as the Wisconsin-based community action agency Western Dairyland, which hired 16 people – many of them unemployed carpenters – after receiving $7 million in additional stimulus money in 2009.

While officials won’t know exactly how much money they will get for several months, they fear it will be less than the $2.5 million they have received in years past and that their staff will have to be cut.

“A lot of these guys were down on their luck, and you’d hate to lay them off just because of funding cuts,” said Mike Canaday, the program director for Western Dairyland’s weatherization program. “They very well may go back on unemployment like they were when we hired them.”

Officials say the industry needs continued federal support because weatherization has yet to become a priority for many homeowners, and those who need it most can’t afford the upfront costs of improvements, which can cost thousands of dollars.

Financing options, such as Property Assessed Clean Energy or utility-supported efficiency programs that allow ratepayers to pay for upgrades gradually as part of their utility bills are spreading, but still aren’t enough to sustain the industry on their own, they say.

“There is a growing awareness of energy efficiency, but it’s still an evolving market,” Scott said. “It’s not caught on to the extent people had wanted, and while it’s not a totally dead issue, it’s certainly not a national movement.”

Scott Whitworth, who oversees the weatherization division at Thor Construction, in Columbia Heights, Minnesota, has seen this firsthand.

The company added staff and invested around $100,000 to build out its weatherization division to take advantage of the stimulus funds, but has cut its 16-person weatherization staff nearly in half because of cuts in government funding.

Whitworth said the company plans to begin its own marketing campaign to build interest, but that homeowners have proven difficult to convince.

“We’re getting some referrals, but it’s still a process that has to be continually worked on,” he said. “There’s still a learning curve, there’s no doubt about it.”

Convincing people to consider a career in the industry is also becoming a challenge.

Class sizes at the Kansas Building Science Institute – a Manhattan, Kan.-based training center that provides courses for aspiring home energy auditors – doubled after the stimulus program was passed in 2009.

Many of those who flocked to the school were unemployed and eager to find a new career. But interest has evaporated as funding has dropped off, said Doug Walter, KBSI’s president.

“I wouldn’t say ebb is a good adjective – the numbers have plunged,” Walter said.

Even those who don’t directly receive weatherization help can benefit, said Suzanne Watson, the policy program director for the American Council for an Energy-Efficient Economy.

Roughly a quarter of the energy consumed in the United States is used to power American homes, and anything that is done to curtail that use helps reduce the need for costly power generation and transmission infrastructure, she said.

Watson acknowledged that it is hard for people to think of energy efficiency as being “big enough” to offset such costs, but that a wide-reaching effort to reduce energy use can have a major impact.

Any money that isn’t spent on energy also becomes available to fuel other areas of the economy, which also need support Watson said.

“You’re essentially putting money back into the consumer’s pocket, which is spread back into the economy across all sectors,” she said.

Meanwhile, household energy costs have increased for the last several years, climbing to an average of $1,419 in 2010, according to a recent USA Today analysis.

Low-income families see their energy use fall an average of 35 percent, saving $400 on their energy bills in the first year after receiving weatherization assistance, according to the Department of Energy.

Judd Shultz, the housing director for the Minnesota Valley Action Council in Mankato, said the agency’s waiting list, now at more than 300 homeowners, grows every day as people find it harder to pay their bills.

But the agency has already let 13 of their weatherization crew members go because of cuts, and Schultz said getting to all of those who want help will be impossible if more money isn’t made available.

“This doesn’t just hurt as a weatherization agency, but it hurts all those households that we can’t get to,” he said. “What we do makes a huge difference for these people.”