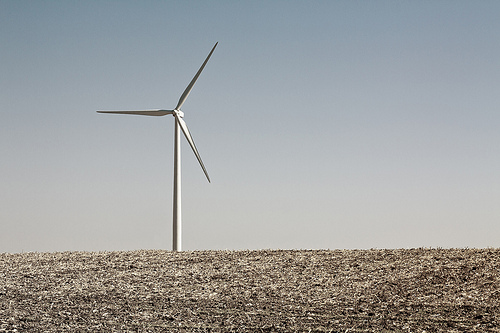 CHICAGO — Wind power leaders meeting here this week say they will leave “no stone unturned” as they seek to win votes in Congress for a renewal of the federal production tax credit (PTC) before the end of the year.

Should they fail in Washington, however, industry executives said other drivers — including state-based renewable portfolio standards (RPSs) and lower electricity costs borne of technology improvements and other efficiencies — should sustain wind power developments in 2013 and beyond, albeit at a smaller scale.

“Obviously, the PTC is important, but you can see a day when we don’t need the subsidy,” said Dan Foley, CEO for Acciona North America, a subsidiary of the Spanish renewable energy conglomerate. “What’s been driving demand for the last few years isn’t the PTC, it was the state RPSs. And the state RPSs will continue to drive demand, even if the PTC goes away.”

But successfully engaging policymakers at both the federal and state level remains imperative, officials said, if wind energy is to maintain its position as a leading alternative to fossil fuels for electricity generation.

The Chicago meeting was the first of several regional summits beings sponsored by the American Wind Energy Association (AWEA), with additional events scheduled in Portland, Maine, in September and Houston in December.

But a major question remains as to whether wind power can maintain its growth curve without the corporate tax credit, which amounts to roughly 2.2 cents per kilowatt-hour for wind produced.

Among all renewables, wind has accounted for the lion’s share of green power production since 2008, with more than 6,800 megawatts of new generation coming online in 2011 alone. Much of that growth has occurred in the Midwest, with Illinois, Iowa and Minnesota ranking among the top five states for 2011 capacity additions.

Industry leaders cautioned that such momentum could slow significantly if government policies designed to promote renewable energy lag, due to either changing political dynamics or persistent price competition from other fuels such as natural gas.

Sunil “Sonny” Garg, president of Exelon Power, which owns 37 wind power projects in eight states, said cheap natural gas prices are making it “a little bit tougher” for utilities to pursue fuel diversification strategies “because people take a short-term view of it.” But, he added, “gas is not always going to be cheap, so the right thing to do is to keep thinking about diversifying your stacks.”

One factor working in the industry’s favor is its emergence as a major employment sector, with an estimated 78,000 workers drawing paychecks either from wind power developers or from firms involved in the wind turbine supply chain.

Organizers of the Chicago summit were quick to note that much of the industry’s domestic supply chain is anchored in the Midwest, with hundreds of firms in former Rust Belt regions of Illinois, Michigan and Ohio contributing to the wind power sector. At the same time, farm states like Iowa and North Dakota are rebuilding local economies around the manufacture of turbines, blades and towers that once had to be imported from Europe and Asia.

That contrasts sharply with conditions from just a few years ago, when only 25 percent of the U.S. wind industry’s components were manufactured in the United States, a figure that grew to more than 60 percent by last year as local supply chains took hold.

Ralf Sigrist, president and CEO of Nordex USA Inc., which in late 2010 opened a $40 million turbine manufacturing plant in Arkansas, said the increasing size, weight and complexity of wind power equipment made shifting the company’s manufacturing base from Europe to the United States a key element in its growth strategy.

Moreover, the wind energy industry’s robust expansion in the United States has helped stem the erosion of domestic manufacturing jobs while also giving a boost to farmers by creating new revenue streams that allow farms to remain profitable when prices for agricultural commodities fall, he said.

“Equally important to the story is the farmer who couldn’t run his farm anymore without the additional income from winds here in the Midwest,” he said.

Yet even with recent robust growth, industry officials say the wind power sector has not “matured” to the point that it can maintain its economic foothold without government help, in the form of either tax credits or the continuation and expansion of state-based RPSs.

Steve Trenholm, CEO of E.ON Climate and Renewables North America, which owns more than 2,200 MW of wind generation in the United States, said the industry has worked hard to make its case in Washington for an extension of the PTC, but greater grassroots efforts are needed to push reluctant lawmakers into the “yes” column on a congressional vote.

He also said work must be done at the state level to make sure existing RPSs are not weakened or eliminated on the premise of regulatory rollbacks. Such programs have come under increased criticism from conservative activists who argue that RPSs are driving up electricity costs for ratepayers while failing to provide other economic or environmental benefits (ClimateWire, March 5).

“A movement to roll those back would be equally if not more devastating” than the loss of the corporate tax credit, he said.

Among the other highlights of Tuesday’s summit was an announcement by transmission developer Clean Line Energy Partners LLC that it will grant “preferred supplier” status to Southwire of Carrollton, Ga., to provide overhead transmission cable for the Rock Island Clean Line project linking wind farms in northwest Iowa to load centers in Chicago and points east.

The agreement comes as a boon for Southwire’s Flora, Ill., manufacturing plant, which is expected to produce much of the 500 miles of high-voltage direct current (HVDC) line capable of delivering 3,500 MW of electricity to the grid.

“Illinois is a leader in the renewable energy sector, and agreements like these are helping make Illinois even more competitive,” Illinois Gov. Pat Quinn (D) told a gathering at the AWEA summit. “These cutting-edge projects will help maintain Illinois’ national leadership in wind energy and manufacturing, and create good-paying, home-grown jobs.”

Officials with merchant transmission developer Clean Line Energy Partners have said the Rock Island HVDC line will help spur as much as $7 billion in new power generation in wind-rich regions that currently have little or no access to the national power grid.