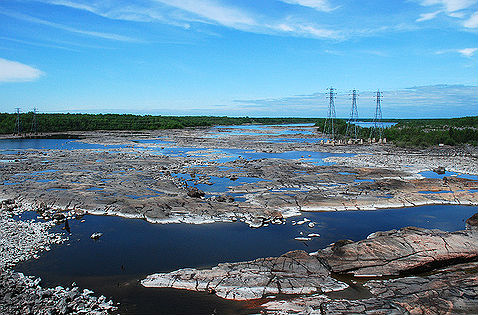 The Seven Sisters Dam in Manitoba. (Photo by Miss Barabanov via Creative Commons)

Electricity produced by Canadian dams is finding a growing market in the Upper Midwest as energy providers seek out new low-carbon electricity sources.

Two Midwest utilities – Minnesota Power and Wisconsin Public Service – have signed contracts within the past six months with Manitoba Hydro for a total of 350 megawatts.

Xcel Energy, Minnesota’s largest utility, also has a long-standing relationship with Manitoba Hydro for 850 MW and inked a deal for 125 MW last year. In 2010, Minnesota received 14 percent of its electricity – mostly hydropower – from Canada, while Wisconsin imported 3.4 percent, according to the U.S. Energy Information Administration.

“We’ve had a long history of selling energy into the Minnesota and Wisconsin markets,” said Glenn Schneider, public affairs manager for Manitoba Hydro. “We’ve had agreements before. For three or four years now Wisconsin has been looking for a big and renewable source of power that has a low carbon impact and meet the state’s renewable targets. In Wisconsin they don’t have a lot of options.”

Rutledge said the arrangement calls for a new 500 kilovolt transmission line from Winnipeg to a substation in northern Minnesota’s Iron Range and a 345 kV line to Duluth, where the power could be sold into Wisconsin and the Midwest Independent Transmission System Operator (MISO) market.

The cost of the first leg would be shared between the two utilities, Manitoba Hydro and Minnesota Power, while the line to Duluth would be a partnership between Minnesota Power and American Transmission Co. Rutledge said Minnesota Power would share the costs of building both lines, which together will cost hundreds of millions of dollars.

Minnesota Power plans to bank energy, via pumped hydro storage in Manitoba, produced by its Bison Wind Farm in North Dakota during times of low demand at night. During the day it would get back electricity dependent on need.

The U.S. is Manitoba Hydro’s premier market. Eighty-four percent of its exports are to the U.S., mostly to the Midwest, with the rest going to adjacent Canadian provinces.

Export purchases peaked in 2006, when high rivers and big demand lead to $827 million in net revenues from exports, in sharp contrast to last year’s $398 million take.

The company has major agreements with seven U.S. utilities – the biggest being an ongoing $1.7 billion contract with Xcel Energy, followed by Minnesota Power, WPS (which has an existing 108 MW agreement) and Great River Energy (which trades 150 MW on a seasonal basis).

Manitoba Hydro expects to add $4 billion in revenues annually after 2020, when the new purchases kick in.

In order to meet growing demands in the export market, the provincial government announced last year the construction of the 695 MW, $5.6 billion Keeyask Generating Station in partnership with four tribes.

The reason? Midwest power contracts, according to the provincial government’s own press release on the project.

Schneider said the company has other potential hydro projects in the offing, including the Conawapa Generating Station, which will be double Keeyask’s capacity and open in 2024. Keeyask is a result of a government requirement to add a new supply of electricity by 2019, he said, but it will produce more power than the Manitoba can absorb.

Manitoba’s provincial government has just one coal plant left, with plans to retire it soon, and has publicly stated it wants to become the one of the most sustainable energy providers in North America, according to the government’s 2008 Beyond Kyoto report.

MISO declined to comment for this article, but its spokeswoman, Jennifer Lay, said the organization is working on a report on the impact and opportunities of Canadian energy.

Some Wisconsin hydro firms also tried to stop the Legislature from allowing Canadian hydro in, saying it hurts their business.

A bill in the Minnesota legislature would change the state’s renewable standard to include large hydropower, but for Minnesota Power, such a change isn’t necessary.

“This is a really low cost, carbon-free energy resource for our customers,” said Rutledge. “We don’t need to change the law to meet the Minnesota Renewable Energy Standards because we’re doing that through low-cost wind.”

Xcel Energy representatives say the company is on track to reach RPS goals by 2025, but it has advocated in the past for the allowing Canadian hydro to count toward renewable credits.

State officials have no complaints about Canadian power so far, at least. Mike Rothman, Minnesota’s Commerce commissioner, called the recent agreements “of importance” to the state’s energy mix and suggests they won’t be the last.

“We are aware of interest on the part of Manitoba Hydro and Minnesota utilities to extend and possibly expand this trading relationship,” he wrote in an email.

Wisconsin and Minnesota aren’t the only states buying Canadian hydro. The New England market has had a long, established relationship with Hydro-Quebec, the largest exporter of electricity in Canada, according to Jacob Springer, president of the Canadian Hydropower Association in Ottawa.

Manitoba Hydro is the second-largest energy trading partner with the United States, he said, and an active market among U.S. and Canadian utilities exists on the West Coast, too. Hydro-Quebec’s website reports 8 percent of sales are to the U.S., but those purchases represent 32 percent of the company’s net income.

The numbers are expected to grow as Hydro-Quebec lobbies with New Hampshire power officials to share construction of the 1,200 MW Northern Pass transmission project that would serve the New England market. The company would potentially provide power for a large, privately funded transmission project to bring Canadian power to New York City.

In 2009 Hydro-Quebec announced $10.4 billion in new hydro plants, and $7.8 billion in transmission lines, both indicators not of explosive domestic growth but rather a large and willing international partner to the south.

Springer says the country has potential to add 163,000 MW of hydropower – which would more than double its current generating capacity from all sources combined.

“We have the third largest amount of surface water in the world,” he said. “We have a lot of rivers, we have a lot naturally attractive options, a lot of sites due to topography were attractive. Stretch that over the second largest land mass in the world and you’d expect there’d be a lot of opportunities.”

Editor’s note: An earlier version of this story incorrectly stated that a bill to add large hydro to Minnesota’s renewable energy standard hasn’t been heard at the legislature. It was recently discussed before a Senate committee.