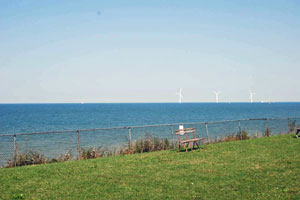 An artist's rendering of wind turbines off the shore of Lake Erie at Lakewood Park, near Cleveland. (via Cuyahoga County)

CLEVELAND — Two years ago, before shale gas burst on the Ohio scene, the city’s political and business leadership saw a future of wind power development within reach just off their Lake Erie shore.

The Lake Erie Energy Development Corp., a nonprofit created by Cleveland-area leaders, asked developers to submit bids for a $100 million pilot offshore wind park. They hoped it would be a foundation for a new industry that would spread from turbine, tower and electronics manufacturing to construction of barges that would install offshore towers. Starting with 20 to 25 megawatts of output, the project could grow to 1,000 MW — the size of a nuclear power plant — by 2020, sponsors said in 2010.

Now that vision has drifted over the horizon, out of sight for now, because of Ohio’s excitement over low-priced power fueled by shale gas and fading political support for renewable power, according to the common assessment of energy and industry experts in the state.

Ohio’s shale gas potential, based on the Marcellus and Utica shale plays in the state’s eastern half, dominated the new energy policy proposals announced last week by Gov. John Kasich. He will ask the Legislature to raise the state’s severance taxes on oil and gas production, which could generate $1 billion annually in five years, and wants to use the funds to pay for a cut in state income taxes, he said.

He also pledged to make Ohio’s energy safety regulations “the model for the rest of the country.” He told a reporter Tuesday of a conversation that day with President Obama about the shale gas outlook as they attended a college basketball game in Dayton.

Kasich said he told the president, “We’ll be introducing legislation this week that will deal with the ability to have the proper development of the wellheads so that we don’t leak into groundwater.” Shale gas “can really help us to become more energy independent. And we don’t have to sacrifice the environment to get the jobs. We can do both.”

“We have to be very sensitive about the environment. We cannot allow bad practice to harm the environment,” Stuble said, warning that one bad actor could tarnish an industry.

Offshore wind power was not a headline.

Struble said the governor will ask the Public Utilities Commission for policies that make it easier for customers who want to pay for wind or solar power to choose that option. “We’re going to figure out a way to do that,” he said.

“Here’s what we didn’t do,” Kasich summed up. There was a lot of speculation that his plan would seek to abandon the renewable energy mandate. “We kept the standards in place.”

The Lake Erie wind project, spearheaded by Cuyahoga County, has been forced to stretch out its deployment plan. Without substantial federal or state support, the project depends on securing long-term commitments from utilities, municipal power providers and industry to buy the wind farm’s output, says LEEDCO President Lorry Wagner.

“There is this irrational exuberance over the gas,” said Wagner, a veteran wind energy developer and engineer. “Everybody is focusing on that, so our window of being able to have a discussion about wind gets smaller and smaller.”

“We wanted to have something on the water sometime this year,” Karpinski said. “As we pursued this, we realized that was too aggressive. It’s really about finding the path to the investment. Until we’re past that hurdle, we aren’t planning the subsequent stages.”

Ohio has a statewide target of achieving 12.5 percent of its electricity needs from renewable energy by 2025, adopted by the Legislature in 2008 with bipartisan support.

In 2010, Ohio had 33,000 MW of summer season electricity generating capacity, with just 7 MW of installed wind power. According to an unofficial summary by the Ohio Power Siting Board, the state has 1,806 MW of wind power capacity installed or pending approval. Only 100 MW of that is currently online.

But last year the Legislature didn’t agree to LEEDCO’s proposal asking that regulated utilities be given an incentive to purchase the wind farm’s electric power, and Kasich did not support another pitch that would direct utilities to buy the wind farm’s initial output at a price set by the Public Utilities Commission.

The challenge for offshore wind is documented by the Energy Department’s Energy Information Administration, which estimates the average “levelized” cost of new offshore wind generation, including capital investment and operating expenses, would be $243 per megawatt-hour in current prices, for units coming online in 2016. The comparable cost of advanced gas-fired generation was $63.

The county commissioned a consultant’s report on offshore wind power that concluded that the pilot wind farm would have to charge buyers two or three times the current wholesale electricity price to fund the project. The 2008 report [PDF] assumed these charges would range between $160 and $220 per megawatt-hour — if the federal production tax credit for wind energy remained in effect. The credit is due to expire at the end of 2012, and the chances of its renewal in an election-year Congress are not clear.

Despite the cost hurdles, wind power prospects galvanized a wide range of business and political support at the outset. A county-formed task force held monthly meetings, funded the feasibility study and created LEEDCO as a public-private partnership.

The Great Lakes Science Center in Cleveland erected a refurbished 225-kilowatt wind turbine at its lakeshore site to symbolize the promise of the wind option. Lincoln Electric, a Cleveland-area supplier of welding technology used on wind turbines and other industrial projects, put up a 2.5 MW wind tower acquired with support from federal Recovery Act funds.

The German turbine manufacturer hoped to use the turbine to trigger expansion in the United States, said Seth Mason, Lincoln Electric’s energy manager, but the drop in gas prices chilled those ambitions. “It’s really tough,” he said. “That is the difficulty, absolutely.”

At the start, the campaign for offshore wind in Lake Erie was based on both employment and business expansion, and the benefits of carbon-free wind power in protecting the climate, said Rebecca Bagley, president of NorTech. The climate argument has drifted offstage. It’s about the economy now.

LEEDCO and NorTech continue to promote the vision of the Cleveland region as a center for offshore wind power development in the Great Lakes region.

“Everybody knows that for offshore wind to be competitive, it has to be industrialized,” Wagner said. “Taking engineering products and turning them into industrial solutions” — that is Ohio’s strong suit.

“If we don’t respond early, somebody is going to capture that first-mover advantage,” Karpinski said. “Where are you going to develop the port infrastructure, the manufacturing base to service that industry, the construction expertise, the maritime operations? It’s not going to develop at every installation site.

“That’s going to happen at one place on the Great Lakes, at least for Ontario and Erie.”

The potential but still problematic job gains in the future from an offshore wind industry don’t stand up well against a boom in shale gas development that is putting dollars into lease-holders’ pockets and raising profits for manufacturers of drilling equipment today.

“Even in the midst of all the excitement, everybody kind of knew this was a long, hard path,” Karpinski said. “But we’ve got to continue to show progress.”

“We have to have an income stream so that partners will continue to invest and the banks will finance it,” Wagner said.

He is buoyed by a new Energy Department grant opportunity that could provide LEEDCO with $50 million. “It makes the financeability of our project that much more certain if we win,” Wagner said. “We will be able to counter much of the current situation in Ohio.”

Cleveland Public Power has promised to by one quarter of the pilot project’s output, but Wagner is still seeking the other commitments from utilities and major power customers. “Ultimately, what we get caught in is, people say, ‘Well, you can’t compete with today’s price. Don’t talk to me about the future. I just want to talk about today.'”

Bagley says Ohio policymakers and utilities need to remember the volatile history of natural gas prices. While it is cheap today, it may not always be. Ohio needs to continuing to develop energy options for the long term, she said. “Diversity is our mantra.”

In an interview before Kasich’s speech, Wagner said, “We’re not waiting for the state to give us their blessing. We’re on our own path at this point. … From the governor, we would simply like support. That’s the long and short of it. We’re not asking for money.

“We need to be more in control of our future, and certainly anything the state says or does that is a positive gesture toward us, that always helps. In this environment, our concern is that the state isn’t going to be a big supporter [or] give us the attention, because of what they’re focused on.” That focus is short-term job creation, with a visible payoff before the next statewide election, he said.

Ohioans need to be patient with the wind power project, Wagner continued. “We’re doing something that hasn’t been done in this country,” whether it is permitting offshore wind parks or selling the electricity.

Does the project have staying power? “We’re not independently wealthy,” Wagner said. “Is there going to be enough financial support to do that? If you say five years, I’d have to say, I couldn’t answer that. If you say the next couple of years? Yeah, no question.”