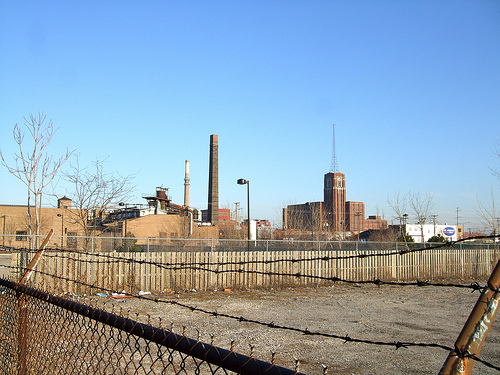 An industrial area in the Pilsen neighborhood of Chicago, with the Fisk Generating Station in the background. (Photo by Steven Vance via Creative Commons)

Across the U.S., dozens of coal-fired power plants, many of them decades old, will be going dark in coming years. Now, environmental groups, city planners, elected officials and local residents are turning their attention from the health and environmental impacts of the plants’ emissions to the future of these sites.

Unlike larger, newer coal plants often built in relatively unpopulated areas, many of the old plants slated for retirement are located in or near dense urban areas, including two plants in the heart of Chicago, two in Cleveland and one on the Potomac River near the nation’s capital.

A list of 106 coal plants with anticipated closings announced since 2010, compiled by the Sierra Club, includes 41 Midwestern plants representing more than 4,300 megawatts in Iowa, Ohio, Illinois, Indiana, Wisconsin, Minnesota and Michigan. The list ranges from tiny plants at the University of Wisconsin and a Wisconsin correctional center, to GenOn’s massive Avon Lake station on the shores of Lake Erie near Cleveland.

The closings mean many people have both hopes and fears about the sites in their midst. Especially for plants on the shores of lakes or rivers or in city neighborhoods lacking green space, there’s much talk of converting the plants to parks or other public spaces. Environmentalists and clean energy boosters have suggested small-scale wind, solar or biomass electricity generation on the sites, to take advantage of existing transmission infrastructure and to make a symbolic statement about converting the old energy economy to the new.

Balitmore's Inner Harbor power plant, which has been home to several commercial developments, including a failed indoor amusement park, since the 1990s. (Photo by Wally Gobetz via Creative Commons)

History buffs and preservationists have called for preserving impressive century-old structures or creating small museums. In Chicago, the site of the Fisk Generating Station on the Chicago River has even been targeted by planners and advocates as the ideal spot for infrastructure to block Asian carp and other invasive aquatic species from migrating up the river to Lake Michigan.

Chicago Mayor Rahm Emanuel earlier this month announced that an advisory committee, including three community members, will be formed to assess the future of the Fisk plant, owned by Midwest Generation, and the Sierra Club and Joyce Foundation will contribute funds for the process.

The Sierra Club and Joyce Foundation, as well as the ELPC and NRDC (mentioned later in this story) are members of RE-AMP, which also funds Midwest Energy News.

But the Fisk plant is so far an exception; there are few clear plans for many other closing plants despite the lively speculation about new uses. Representatives of three major companies closing plants – Dominion, FirstEnergy and GenOn – said they don’t have any near-term plans for redeveloping or selling the sites or turning them over to government agencies or non-profit groups.

This uncertainty stokes fears that the sites will sit indefinitely as unused, fenced-off brownfields, which some environmental leaders and neighbors worry could contaminate groundwater or nearby water bodies including the Great Lakes.

The Environmental Law and Policy Center has called for an independent engineering assessment of the site of the State Line Power Plant in Hammond, Ind., which has operated for 83 years directly on the edge of Lake Michigan just across the border from Chicago. ELPC executive director Howard Learner said independent assessments should be standard practice at closing coal plants, so that any needed remediation can be identified and undertaken promptly.

“The time for assessing whether there’s any contamination on a site is now, not years later,” he said.

Learner added that if sites are owned by or later transferred to limited liability subsidiaries or companies that end up going bankrupt, and contamination needing expensive remediation is later found, “the public could be left holding a bag with a lump of coal that has very high costs for cleanup.”

There is no evidence that there are serious environmental problems posed by the sites of shuttered coal plants, and environmental leaders emphasize that it is the uncertainty, not any confirmed hazards, that most concern them. They raise the possibility of lead and other heavy metals and contaminants accumulating in the soil from the plants’ air emissions over many decades; and also small-scale dumping or spilling of industrial products that may have happened over many years of operation.

Once plants are closed the sites remain subject to state and federal environmental regulation. But the owners would not continue to report releases or seek permits under the Clean Air Act and Clean Water Act once the plants are not active. Leaching or runoff from sites would be subject to the Clean Water Act, but there will typically be no legal requirements for monitoring, so water contamination could easily occur without being discovered. Some plants might store hazardous waste after closing, in which case they would be subject to requirements under the Resource Conservation and Recovery Act (RCRA).

“If EPA were to discover that the mismanagement of hazardous waste at a facility posed a significant risk to human health or the environment, it can require investigation and cleanup,” said EPA Region 5 spokesman Joshua Singer. “As a general rule, the current owner of the facility is responsible for contamination on its property and releases of contaminated material from its property.”

Spokesmen for the power companies said they will comply with all state and federal environmental regulations regarding the sites post-closure. Dominion spokesman Jim Norvelle said environmental concerns are among the factors being evaluated by a corporate team. McFarlan said remediation at the Midwest Generation plants would depend on future uses, and added, “Today, there are about 165 employees plus contractors working on the sites as they have for decades with no evidence of risk to their health and well-being as they walk around the sites, park their cars there, and go about making a living.”

Learner said he thinks companies do have legal obligations to do site assessments and remediation. He and Henry Henderson, executive director of the Natural Resources Defense Council’s Midwest program and a former Chicago environment commissioner, both said that ideally, elected officials, attorneys general, environmental groups and regular citizens would work together with companies to make sure that sites are dealt with responsibly.

Henderson said environmental testing could actually be important to show that coal plant sites might be less contaminated than people believe, hence facilitating their conversion to parkland or other beneficial uses.

“One of the problems with brownfield redevelopment is that people think these are Superfund sites but they’re not,” he said. “There is a huge amount of redevelopment happening at brownfields around the U.S., and I’m confident this can be done (at old coal plants). But that confidence is based on the idea there is a clear pathway for investigation and analysis, identifying contaminants and removing them or isolating them so they don’t pose problems.”

Some industry sources and analysts say the closing of coal plants will create an energy shortage and drive prices up. That could be an argument for developing new generation facilities on old coal plant sites. The options vary widely depending on a site’s characteristics. Urban and suburban areas might be appropriate for solar farms, assuming tall buildings nearby don’t obstruct the sun. State renewable portfolio standards, especially ones with solar carve-outs, can create a healthy market for solar energy, and by nature the old coal plant sites have ready access to the grid.

Most coal plant sites are too small and too close to residents to be turned into wind farms, but wind turbines might make sense on large plots in rural areas with good wind resources. Biomass generation might also be an option for old coal plant sites in agricultural regions, especially if they are on canals or major highways making transport of the biomass efficient.

It is also possible to convert coal-fired power plants to burn natural gas, but company officials at Midwest Generation, FirstEnergy, Dominion and GenOn all said the option was too expensive for the plants they are closing.

If one wants to invoke a nightmare scenario of harmful pollution from energy generation decades in the past, they could look to the Chicago suburb of Oak Park, where buried coal tar from a manufactured gas plant necessitated a five-year, $50 million intensive cleanup. Several nearby residents blame their cancer on exposure to the carcinogenic coal tar, which they say oozed up through the grass of the park now on the site.

A number of coal plant sites nationwide were formerly home to manufactured gas plants that from the 1800s through the 1940s turned coal into gas for heating and lighting, creating the toxic coal tar that was often buried onsite. The manufactured gas plants – thousands of them nationwide, many of the sites still unidentified — were often located along rivers, and owned by the predecessors of utilities that later developed coal-fired power plants.

The Crawford coal plant and areas around the Fisk plant in Chicago are among Illinois sites identified by the U.S. EPA as containing buried coal tar. McFarlan said Peoples Gas, which previously owned the plants, is responsible for the coal tar under an agreement with the Illinois EPA. GenOn, FirstEnergy and Dominion officials said their plants slated for closing did not host manufactured gas plants in the past. Coal-fired power plants do not produce coal tar, though they do produce coal ash which is sometimes stored onsite or nearby.

From plants to parks

Henderson thinks companies and municipal governments have an added responsibility to develop former coal plants into public spaces for nearby residents, since residents – like the largely Latino immigrant families near the Chicago plants – suffered the brunt of the plants’ air pollution for so long.

Midwest Generation spokesman Doug McFarlan said the company does not want to own the two Chicago sites for long, and while it’s too early to speculate on new uses, “we are pleased that the city has said it will take a leadership role to bring together appropriate stakeholders to consider the art of the possible and how to make it happen.”

McFarlan noted that at the Chicago sites, as at many coal plants, there is transmission infrastructure that will remain operational even after the plants close – complicating redevelopment or reuse plans.

The NRDC and the non-profit group Openlands are in discussions with Hammond Mayor Thomas McDermott about the future of the State Line plant site. McDermott said he has also been having fruitful talks with officials from plant owner Dominion about using the site for green space.

FirstEnergy spokesman Mark Durbin said local officials contacted the company about future site uses after the January announcement that six old FirstEnergy coal plants in Ohio, Pennsylvania and Maryland will close by September 2012. One of these is the Bay Shore on the shores of Lake Erie, which opponents have dubbed the “bass-o-matic” since its open cooling system kills about 46 million fish each year. As with the State Line plant, advocates say the proximity to one of the Great Lakes makes contamination a more serious concern.

“We’ve had initial outreach from local municipalities looking at the potential for redevelopment down the road, very preliminary discussions,” Durbin said. “We try to be as good a neighbor as possible.”