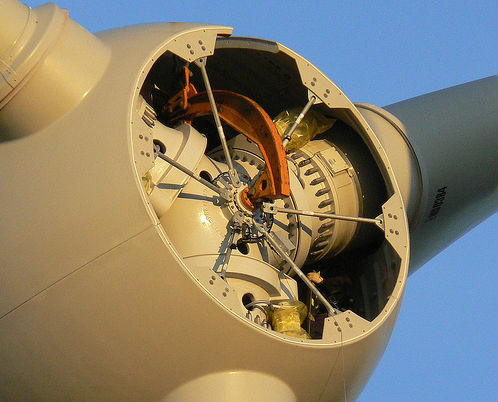 It’s not just the wind industry that’s concerned about the looming expiration of federal tax incentives.

Even though over 150 American foundries have shut down since the start of the current economic crisis, a group of entrepreneurs believe they can help revive the industry by supplying large, metal components for wind turbines. However, they say their efforts will hit an obstacle if Congress does not renew the federal renewable energy production tax credit.

Typically, American wind turbine manufacturers use overseas foundries and import the metal castings for final assembly. But as components grow larger and shipping costs increase, some see potential for a domestic manufacturing revival.

“Why can’t we do it in the U.S.?” asked Prasad Karunakaran, the founder and chief executive officer of the North American Ductile Iron Company, or Nadicom. The company will break ground in 2013 on a new foundry, its first, in Iowa City, and hopefully begin turning molten iron into wind turbines by 2014. And later this year, Eaton Rapids Castings LLC in Michigan will open the first American-based foundry to use wind energy as its core business.

But both Karunakaran and Lennart Johansson, chief executive officer of ERC, worry that orders for wind turbines will vanish once the tax credit expires later this year. Besides making wind power more competitive with long-established energy sources, historically, the credit has also made wind more attractive to investors.

Because of the uncertainty, both companies also plan to build pieces for other industries such as automobile makers, railroads, and gas turbine manufacturers.

“We need to be in all of these markets,” said Johansson, and not become dependent on any one industry, even “if the wind tax [credit] comes back strong.”

American industry has increasingly benefited from wind power. According to Jeff Anthony, the director of business development for the American Wind Energy Association, 25 percent of the components in wind turbines installed in 2005 were manufactured in the U.S. By 2010, the proportion had risen to 60 percent.

That includes things like blades, gearboxes and electrical cables – but not necessarily large, metal parts. Alfred Spada, a spokesperson for the American Foundry Society, Inc., said that so far, “in the casting world, we are not seeing it.”

Many European manufacturers question whether American metal casters can handle the work.

“The domestic U.S. market has limitations in casting size and quality related to the wind components,” said Meike Wulfers, a spokesperson for Denmark-based Siemens Wind Power, one of the world’s leading manufacturers, in a written statement. “Investment is needed to address these limitations.”

Many American foundries use advanced techniques and materials, but not necessarily at the right size and scale, said Paul G. Sanders, an assistant professor of materials science and engineering at Michigan Technological University. “Since the wind industry has grown so much more in Europe, the Europeans have a head start in these heavy castings.”

Spada, however, said that before the recent recession, many American foundries made substantial investments and “had opened up capacity for the large ductile iron components needed by wind turbine manufacturers. But the larger [manufacturers] decided to buy offshore,” partly to exploit low-cost labor.

Still, the exorbitant and growing cost of shipping the huge iron casts should offer Americans an opening. Anthony said that wind farm developers have been demanding ever-larger turbines, and some of the pieces already weigh more than 10 tons. Furthermore, offshore wind turbines “tend to be much bigger machines,” and will almost certainly need to rely on American-based foundries.

Spada agrees. “Why would you want to ship that across the ocean?”

Johansson said it will take more than low shipping costs to ensure success. The Scandinavian wind energy industry, for example, along with the foundries that supply it, has flourished largely due to a three-way partnership between private business, government and universities, or what Johansson calls “the triple-helix model.” The American wind industry “won’t need to be subsidized forever,” he added, but by giving grants to start-up foundries, the state can help them survive until they prove themselves in the marketplace.

“What we did here in Michigan is use the triple-helix model,” he said. The Swedish immigrant once led the Michigan subsidiary of a Sweden-based defense firm, and a few years ago, former Gov. Jennifer Granholm asked him to piece together a deal in which Scandinavian technology could give Michigan industry a “kick-start.”

He convinced URV, a Finnish company, to grant ERC the exclusive North American license for its new metal casting technology, which can quickly produce the 10-ton pieces of iron needed by turbine manufacturers.

The ERC project then received $7.5 million in federal stimulus money and state grants, including funds to work with Michigan Technological University on developing better alloys.

It’s too early to tell if the government investment will pay off, but Skip Pruss, the former director of Michigan’s Department of Energy, Labor and Economic Growth remains confident. He said ERC’s partnership with Astraeus Wind Energy, Inc., a machining company next door to their new facility, will give it an advantage over both domestic and foreign competitors.

Astraeus recently received $8.4 million in federal stimulus funds and $6 million from the state to help develop a machining tool that drastically cuts the time needed to finish wind turbine components.

“Nothing in the world is capable of Astraeus’ precision,” Pruss said. “And if the hubs are also cast here, there will be tremendous economic efficiency.”

But whatever advantages ERC may have, many experts still caution that supplying the American wind industry remains risky due to inconsistent federal policy. Over the past decade, Congress has allowed the renewable energy tax credit to lapse several times, and when it does, investment in wind power dries up.

“It has had a very substantial impact on the market in general,” said Jeff Bocan, managing director of Beringea, a venture capital and private equity firm in Detroit. Losing the tax credit “will create a slowdown. You can very easily link the number of new installations to when the policy is on and when it’s off.”

And according to Siemens’ Wulfers, “long term and consistent policy related to the development of sustainable energy sources, including wind, is the key to developing the necessary business cases for such investment.”

Karunakaran said he expects wind energy installations to soar in 2012, followed by a steep drop in 2013 if the tax credit expires. He hopes the credit gets restored in time for his foundry’s first casting. “I think it will come together, but I hope it’s not too late.”

Johansson’s foundry won’t be a jobs blockbuster this year. They will start slow, he said, with perhaps three or four dozen workers. Still, Johansson and Astraeus officials have traveled around the Midwest region talking to other manufacturers like Peoria, Illinois-based Caterpillar Inc. and express great optimism. If they get enough orders, ERC will eventually expand to a 300-person operation.

“Everybody’s telling us they can absorb our entire production,” said Johansson. “We can go into the next phase very soon.”